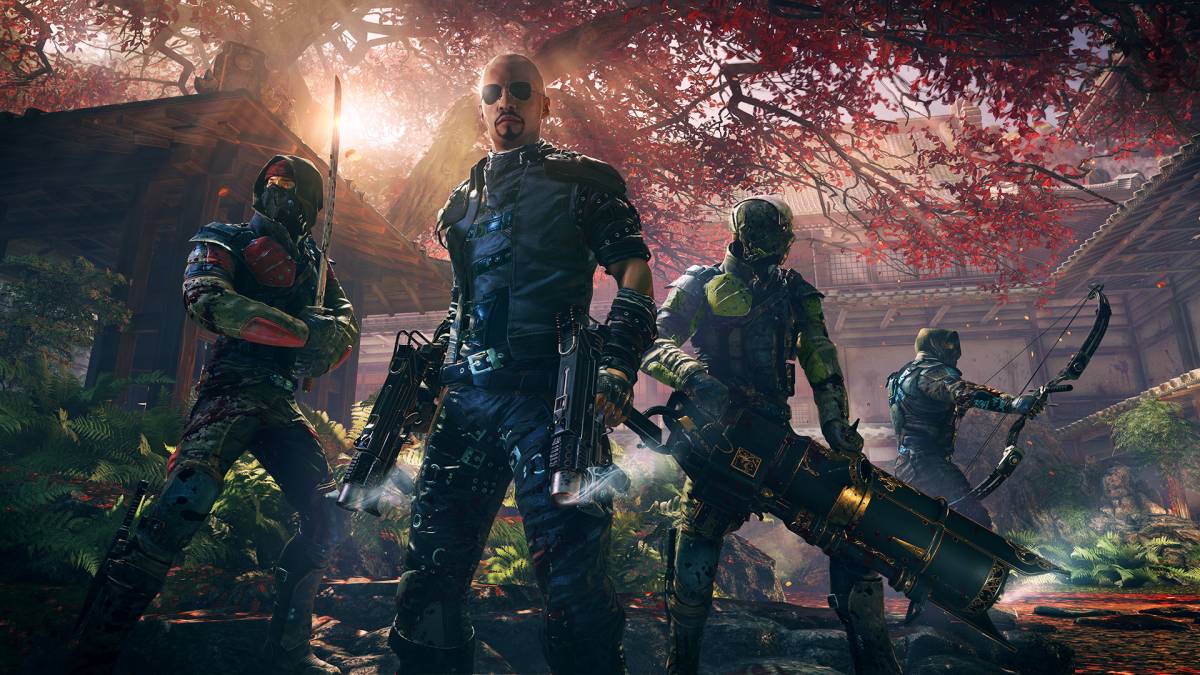 It never stops surprising me that Lo Wang doesn’t have his own innuendo-heavy theme song, or leads a music group called Kool & the Wang. As one of the most intentionally offensive protagonists in gaming history, he’s a controversial hero and someone that might rub some gamers up the wrong way, but for my money, he’s the best creepy uncle you get to play as.

And he’s back for Shadow Warrior 2: the sequel to the reboot of the 3D Realms classic from 1997. If the 2013 reimagining of the hard times of the Wang didn’t do enough to turn older fans away, this one may just push them over the edge – it has almost nothing to do with either game. It’s all the better for it.

While by no means a slog to play, Flying Wild Hog’s first go-around with the cult FPS series lacked something that I could never place my finger on. Perhaps it was the lack of polish, or the gatling gun delivery of penis jokes within such a short space of time that turned me away, but Shadow Warrior failed to pull me in at all. With news that Shadow Warrior 2 would be something completely different and take inspiration from the likes of Borderlands, I guess you could say that I was open to the prospect of more Wang.

From the off, it’s clear that Shadow Warrior 2 –released on PC last year– is a big upgrade on the game that came before it. Visually, it’s much more vibrant and alive, even if some of the NPC models struggle to emote properly. The gardens, towns, and hellish scapes Wang slashes his way through have much better defined character, which is lucky because you will be revisiting them a fair few times each. A quasi-open world is traversable from the game’s hub, a place where you receive missions and bounties, as well as offering somewhere to trade and craft. There is also, of course, the Wang Cave, because penis jokes.

The missions, whether they’re relevant to the main story or are simple side-quests, don’t offer much variety on paper. Take Wang here, collect that, listen to a joke about penises, and return. There are a couple of deviations, but nothing that’s going to make CD Projekt Red concerned. While this may sound like it could make or break the game for many, doing the same kind of task over and over again is saved by just how superb Shadow Warrior 2’s combat feels.

Lo Wang glides across the floor like a warm knife through butter; it’s clear that the developers have tried to replicate the smoothness of movement found in the PC version. A lot of FPS games feel stodgy on console compared to the experience of a mouse and keyboard, but just like last year’s DOOM, Shadow Warrior 2 excels in the fluidity of mass digital murder with controller in hand.

Switching between melee and firearms on the fly, the game recommends experimentation of gameplay styles, aided by the broad range of different enemies and scenarios. For instance, human opponents are infinitely more satisfying to dispatch of with a sword; there’s something coarsely satisfying about dashing around opponents, avoiding fire, and taking their limbs off with a couple of quick sword strokes. It’s not just a case of spamming the attack button, either. Wang can perform special maneuvers, such as a pirouette slash of sorts, or hanging back before unleashing a ranged attack.

Gunplay is best saved for the game’s demons, who are as ugly as they are diverse. There’s an impressive amount of different creatures to shoot apart, from hellish bunnies to bell-tolling “belly monsters” and a whole lot more in-between. Peppering the big guys with explosives before effortlessly releasing a hail of bullets to mop up the smaller enemies never really gets old, and when you combine that with Wang’s special skills, you may well be diving into the closest thing to Bonestorm since Thrillho first picked up the controller.

They aren’t always going to save your skin, but Wang’s abilities can drastically switch up the tide of battle. With a small army coming your way, you can delay some of the weaker enemies with a force push that knocks them back, giving you an opportunity to reload or to simply plot your next move. Vanish turns you invisible for a short time, though it must be said that it seems at odds with the frenetic pace of the game. There’s also the chance to lift spikes from the ground, impaling enemies and leaving them vulnerable. Lastly, Wang is able to channel his chi to replenish his health; something you will be using a lot in the game’s early goings.

Shadow Warrior 2 allows the player to supplement weapons with upgrades, which are usually given as rewards during missions or hiding in chests. There’s an alarming breadth to these that may overwhelm some players; I personally found it hard to think about this mechanic too deeply and just equipped them based on their DPS stat and if they had an elemental bonus. For those who want to delve deeper, it might be too easy to get lost in the numbers as you question whether to sacrifice fire rate for movement, or whether your pistols should be empowered with fire or ice bonuses. It’s clear that these are instrumental to success for the game’s harder difficulties, but playing on normal meant that they were slightly peripheral.

The biggest change to come to Shadow Warrior 2 is co-op, allowing players to dip in and out of the sessions of others or create their own. Luckily, you can take your current character with you so you can help out lower-level players during tricky missions. The game also accommodates for how many players are in a session with different difficulty levels, so it’s worth dipping into if you want to if you want some extra mileage out of Wang. Sadly, just like almost every other PS4 online game, playing with randoms will rarely involve voice chat, so you may want to convince some of your friends to pick the game up if you want the proper experience.

You’re probably questioning why I haven’t mentioned Shadow Warrior 2’s story yet. That’s simply because there isn’t much to talk about. The game often assumes players have been with Wang throughout his whole journey, so it doesn’t bother to establish backgrounds and motivations well at all. At its simplest, you are fused with the mind of Kamiko, who is the granddaughter of a mob boss, after her body is inhabited by something evil thanks to the machinations of the Zilla corporation. It’s obviously up to Wang to set things straight. Apart from the charming relationship between Wang and Kamiko, there’s little to latch onto here. Characters return to give light lashings of exposition before the game descends into rote end-of-the-world nonsense – you’ve probably played through a story just like it in countless games before. It also doesn’t help that Shadow Warrior 2 just sort of ends. It barely hints that it’s winding up for a big finale, so when the end does come and the eighties music kicks in, it feels a little half-baked. 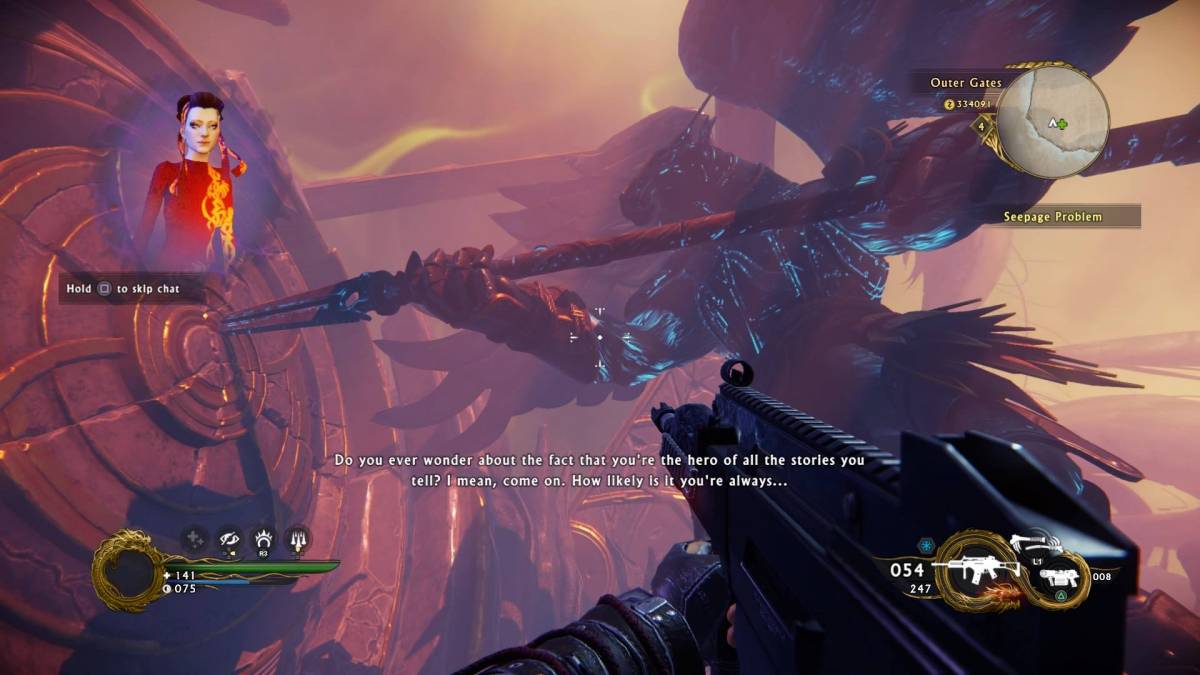 But you get the impression that Flying Wild Hog left Shadow Warrior 2 light on the narrative to free up extra time for murder. The series has always been more about how much blood and mayhem can be on the screen than how relatable its characters are, and the lightweight approach to establishing the game’s world proves that tradition lives on. There’s an impressive amount of lore to explore, however, so those who feel inclined to learn more about Wang’s world will be in their element.

With a 30fps cap on console, Shadow Warrior 2 shouldn’t struggle to perform, but it often does. There’s nothing severe enough to make you eject the disc and cut it in half with a sword, but the annoyances are relatively frequent. It can sometimes chug along in rooms full of enemies and feel like Wang is wading through porridge as everything slows down. Glitches are also frequent; sometimes they are just graphical mishaps like dead enemies pulling off wild dance moves, but there were a couple of instances during my playthrough that required a hard reset. The most infamous of these was when a boss melted through the floor with half of his body poking out before he made a dash for freedom out of bounds of the map. After abandoning the mission to try it again, it then seemed as if every other frame of movement had been removed, which made it totally unplayable.

Even with some issues, Shadow Warrior 2 is an inherently fun massacre simulator that will likely take you by surprise if you let it. Sure, it might let itself down with some weak world-building and technical shortcomings, but if you’re looking for a dumb and effortlessly enjoyable diversion for fifteen or so hours, you can’t do much better.

Verdict
Drawing on some pretty obvious inspirations, Shadow Warrior 2 doesn't have many original ideas of its own, but that doesn't stop it from being one of most purely fun FPS games on the market right now.
8
Cultured Vultures is a pop culture website established in 2013 covering all things gaming, movies, and more. We eat your words.
All The News On The Biggest Games