Say No! More Offers Delight In The Art Of Denial

Embrace your inner Daniel Bryan and scream "NO!" 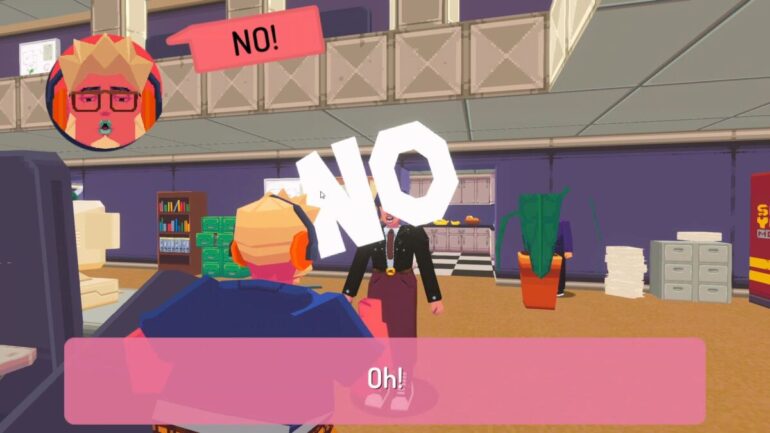 On-rails adventures inspire a retro feel, many of them harkening back to the arcade days of the Area 51 or Terminator light-gun games. Say No! More takes a dash of neo-retro flavor with its blocky 3D graphics but flips the genre on its head with its zany office setting. Papers and people will topple in your wake as you embrace the power of “no”in hilarious and surprising ways.

It all starts when your flatmate approaches you on your first day of work. After congratulating you on your new internship then asking for a rather large favor, your flatmate presents you with a lovingly made boxed lunch. As your first day on the job unfolds, however, things quickly descend into anxiety and confusion. It all comes to a head when your supervisor unceremoniously steals your lunchbox. After finding a Walkman and life-changing cassette, you embrace the power of the word “no” and begin to learn its devastating powers in the workplace. Before the story begins, however, you must create your character.

There is a robust offering here of colorful choices for everything from clothes to hair to glasses, along with a fair amount of face styles. Although there’s only a few body types, Say No! More offers a ton of fashion choices to give your character the perfect look, whether that be a modest representation of yourself, or a green-haired, blue-skinned cartoon character. It all comes together when the game gets rolling and it’s satisfying to see your character out there dishing out “no’s” to everyone.

While the gameplay is on-rails, leaving your ability to explore limited, there is plenty of action to be had. Using your powers of denial, you will rise above your internship on your quest to get your lunch back. These abilities are explosive, giving your character the power of the Dragonborn with every “no.” Charging up your responses will send people and everything around them flying upon release. These can lead to laugh-inducing results of adversaries hitting various loose items in the world or bouncing off of walls.

This method of conflict resolution is hilarious when combined with the game’s comedy. Co-workers and supervisors will come to you to squander their responsibilities, order coffee refills or simply boss you around. The fully-voiced dialogue is silly and makes each “no” you unleash feel satisfying, especially when you want the conversation to stop.

You’re also able to add insult to injury by taunting your adversaries first, which includes laughing at them or slow-clapping in the middle of what they’re saying. This adds even more laugh-out-loud moments, as most NPCs have something to say about your behavior. Remember that while it’s easy to deliver an explosive denial, it’s important to be mindful — not everyone deserves a nasty “no!” Listening can pay off when it counts, leading to some smile-inducing results.

The cherry on top is the sound design. The bouncy soundtrack ties in well with the loud colors that define the aesthetic. The decision to have the music come from the players’ walkman headphones is also a fun touch that serves as a clever tutorial device. It brings the wacky atmosphere to the colorful world around you together, solidifying the aesthetic perfectly.

While the gameplay is funny and engaging when complimented by the soundtrack, the variety itself falls a bit flat. You have a few different ways of saying “no” to people, but they offer little other than sounding different from one another. While they may change your characters’ demeanor, they don’t affect the world differently from one another at all. When my character learned a “cold no,” I thought it would be as visually bombastic as the rest of the game. The same can be said for the taunts.

There is also very little focus on interacting with the environment outside tossing everything in it around the room. This is a shame because the colorful world is alluring and delightfully destructible, making me want to see it all. While there are a few easter eggs hidden in the mix worth checking out, they are mostly found by listening to all the dialogue certain NPCs say. While charming at first, it can feel like a waste of time if one of these surprises falls flat.

My time with Say No! More was very enjoyable overall, and it was easy to get comfortable and lose myself within the cartoonishly slapstick world. There is a ton of subtle world-building and funny dialogue to keep you engaged on your office rampage. While there are some issues, the first two chapters offered plenty of great laugh-out-loud moments that made dashing hopes an absolute blast to play though. The game also has a very upbeat soundtrack and atmosphere to back up the comedy and keep a smile on your face. If you’re looking for a chill game that puts a funny spin on the usual formula, this title is definitely one you’ll want to check out.

A preview code for Say No! More on PC was provided by PR for the purposes of this article.