Watch out: Battle Through Time might go down as one of 2020's surprise hits. 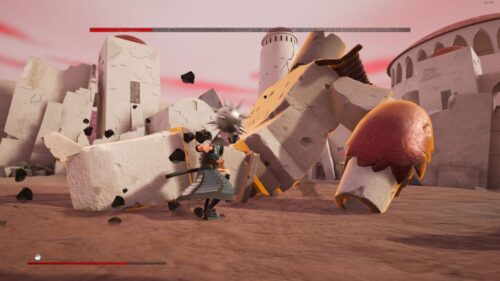 Battle Through Time wears its influences on its sleeve, taking bits from Devil May Cry here and parts from Bayonetta there, though not quite with the same devilish pace and scope for wild combos. It’s similar to the show in that regard: it doesn’t really rush what it’s trying to be, a game more about timing and patience than frenetic flurries of slashing and dashing.

Taking place within a scene in the series finale, one that its creators wanted to expand upon, Samurai Jack: Battle Through Time sees you hurtling through time as Jack with the ultimate goal of returning to Ashi and a final confrontation with Aku. Battle Through Time acts as a greatest hits compilation for the franchise as a whole, taking you through many of its iconic story beats and bringing back some familiar faces, often putting you right there in the middle of the action.

That action starts off somewhat meekly, Jack only able to use basic combos with no option to double jump or really dance his way around opponents. The first hour is probably Battle Through Time at its weakest, the action not really clicking and the tempo feeling just a little laboured. As time goes on, though, players will really begin to embody Jack through various upgrades that will help you repel attacks, hop and spin away from Aku’s minions, and even unleash devastating AOE moves to wipe out everything on-screen.

Players have more than a handful (perhaps too many) resources to collect to improve Jack, ranging from Skill Fire to Bushido and even precious materials that can only be used for specific upgrades. Gold can be used to purchase different weapons and ammunition from Da Samurai, who can also train Jack for each specific weapon type and help him unlock extra moves for them. On top of that, there’s also Kiai Fire for devastating one-hit kill moves and Dama for temporary buffs. There’s a lot going on in Battle Through Time — it’s not just a simple tie-in.

What really helps the game’s action to stand out are the various weapons you will pick up throughout your journey, giving you plenty of options against opponents with different weaknesses. For instance, I found that undead enemies weren’t too keen on getting punched in the face and I could seamlessly swap to Jack’s fists with the D-pad, juggle them in the air with an uppercut and then smash down with a spear to finish them off while inflicting splash damage to everyone else. Other weapons, such as a giant hammer, deal huge damage while being painfully slow to use, but each weapon at your disposal has their own strengths and weaknesses.

Ranged weapons also vary things up dramatically, stunning enemies in the middle of a big attack and chipping away at the game’s many bosses. From the bow, which never feels quite right to use, to revolvers and even machine guns, you’re hardly left wanting when it comes to combat options. You can even assign healing items to directions on the D-pad, though these are never common enough to feel like you can liberally use them. Switching between weapons, keeping your attacks unpredictable, and balancing resources is the key to not only winning the day, but also unlocking the potential of Battle Through Time’s slick combat.

Timing becomes more important the trickier and less predictable enemies become, meaning that you will have to lean on your blocking, dodging, and parrying a lot more. A perfect parry opens up a window to deal huge damage as time slows down, while your dodge will eventually allow you not only-side step but also roll out of the way, giving you the chance to attack from behind. To be clear, timing isn’t as key here as it is in Sekiro as you still have loads of other ways of playing, but those who want to master the game’s combat will likely find plenty of joy with it.

Battle Through Time also benefits from having a keen eye for detail, particularly when it comes to Jack himself and his appearance. Upon taking damage, Jack will become more and more unkempt, his clothes torn and his hair loose when on the verge of death. As well as being a neat nod to how battered Jack gets in the show, it also helps the player to gauge their health without glancing up at their life bar. On top of that, there are tonnes of little Easter eggs that eagle-eyed Jack fans will adore, including a blink and you’ll miss it usage of its unforgettable theme tune.

There’s so much to do and find in Battle Through Time that it actually beefs up its somewhat slender length. Playing on Samurai (medium difficulty), I was able to see the credits roll in five and a half hours with only a few failures in the midst of it all. This may seem short for some, but playing on higher difficulties will of course fluff that up a lot, as well as providing the best way to make use of all the upgrades. Despite completing the story, I still had an absolute tonne of upgrades to unlock, not to mention all of the collectibles hidden away for full completion.

Battle Through Time even gives you things to do beyond the story, “Missions” unlocking after the final battle. These range from boss encounters to simply getting as good a score as you can, and even Endless Missions for those who are brave/crazy enough to complete the game on Master Samurai difficulty. Speaking of that difficulty, I tried it for five minutes and can confirm that it is completely beyond my brain to beat, though anyone who revels in other rock-hard character action games will probably find it to their liking. For me, though, it’s a solid no thank you.

Unfortunately, as good a goodbye as Battle Through Time is overall, there are some spots where the lower budget seeps through. Animations can often be rough and very rigid, Jack turning like a robot fridge during some cutscenes, and climbing up walls may be some of the most unconvincing traversal I’ve ever seen. On top of that, the game’s few platforming segments feel beyond finicky, you not really able to satisfyingly leap around and instead having to fiddle a lot to land in a pixel perfect way and on the exact spot the game wants you to.

I also have to critique how often the difficulty seems to abruptly spike, especially when it comes to enemies with ranged attacks. It’s difficult to close the gap when there are multiple enemies with guns and lasers as their attacks will stun you out of movements, resulting in you often getting trapped in a combo of fire. This is probably by design to make players make the most of their own ranged attacks, but when resources seem scant and your weapons can break (a mechanic I am still not quite sure of), it’s not always as easy as that. These attacks are on the weak side and will rarely lead to your death, but man, it’s plain annoying to be stuck in a flurry of nonsense.

Though it might have a few issues, I couldn’t help but adore Samurai Jack: Battle Through Time as a love letter to the series as a whole and just a plain fun game in its own right. While not the slickest, fastest character action out there, Battle Through Time feels like a game that fans will be playing time and time again. 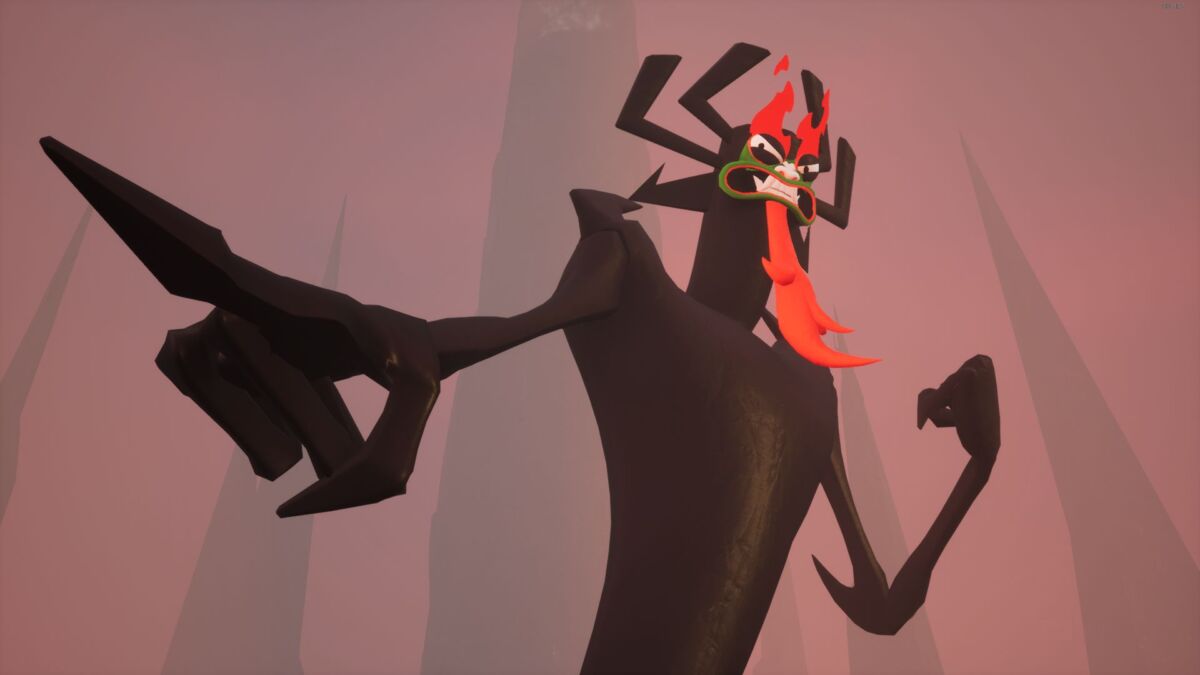 Verdict
Watch out: Battle Through Time might go down as one of 2020's surprise hits.
8