Team RWBY discover what’s hiding under the house, and it isn’t pretty. 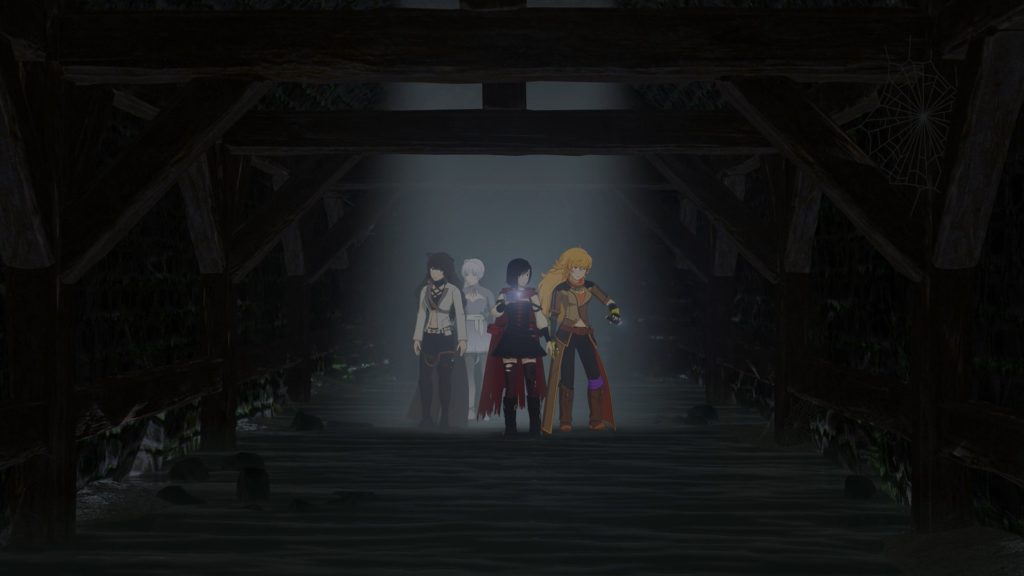 It’s been something of a slow start, but RWBY volume six finally picks up the pace with ‘Alone in the Woods’. Carrying on the mystery of Brunswick Farm, the episode starts off at a sluggish pace and may come off as a little boring…until the team find a dark, hidden secret.

Picking up almost immediately after the previous episode, the tension carries over. As night falls and the storm begins to clear, team RWBY sit by the fire while Qrow keeps a drunken watch. In the background, Maria is reading the diaries of the homestead’s owner, commenting on how Bartleby – the head of the estate – was a clever man who would come up with different schemes. First time viewers of this episode may consider this to be rather offhand and it doesn’t seem to fit with the rest of the dialogue. However, in hindsight, it’s a blunt but effective set up for what is to happen.

The team get some rest and oversleep into the next day. Ruby finds her uncle passed out from drinking too much and throws an empty bottle against the wall to startle him awake. Afterwards though, she quickly becomes more sympathetic and hugs her uncle, telling him that her and Yang are there for him, a statement which he seems to brush off. As the team make preparations to leave by attaching a trailer to the back of Bumblebee, everyone seems defeated, talking about how their mission is a fruitless effort, all with the exception of Ruby, who is determined to keep going. Yang tries to convince Ruby to throw the Relic of Knowledge down the well because it could take years before Salem finds it, that “it might not even happen in our lifetime”. Ruby almost does it, but sighs, changing her mind at the last minute. The rest of the girls seem to be in a slumped trance. At first, it seems as though what’s under the house is what’s possessing the girls, but the episode goes down a different route entirely.

A flash of red eyes pops up from the shadows, making both the audience and Ruby jump. It is here that the episode decides to pick up the pace, revealing that what’s under the house is definitely a Grimm of some kind. In her fear, the relic falls from Ruby’s hand down into the well. Panicked, she convinces the reluctant members of her group to go down with her to get the Relic back, while Maria continues to read, Qrow continues to drink, and Oscar looks for a spare tire for the trailer.

RWBY travel down a dark maze of waterway tunnels, trying to find the relic which has been dragged away by the current. In a sequence of rising tension, the camera switches to RWBY looking for the relic and Maria reading the diary. Ruby finds the glowing relic and runs ahead to retrieve it. However, it is then that we all learn exactly what’s been hiding under the Brunswick Farm: a previously unknown type of Grimm called the Apathy, which are nothing short of nightmare fuel. While the creators of RWBY have portrayed previous Grimm as terrifying foes to deal with – in particular the Knucklavee in Volume four – these things are something else entirely. Slow moving, whispering, tall gangly figures which move in packs, these creatures have been plucked straight out a horror movie and are a stark contrast to the more brutal, fast-moving Grimm. Their design and the moans they make coupled with the tense orchestral music in the background makes for a truly tense sequence. At first, RWBY tries to fight them, but the monsters release a scream which seems to tire out the girls all the more. As Maria goes to help them, they are left with only one option: run.

After a brief chase, RWBY and Maria find themselves cornered in the cellar. They are at first hopeful when they see the locked doors, but Blake is too exhausted from the spell of the Apathy. As the other girls grow more weaker, it seems all hope is lost as the monsters close in on them.

It is here, that the power of Ruby’s silver eyes returns, stunning the beasts long enough for the group to try and open the doors. However, the Apathy quickly recover. Here, Maria crawls to Ruby and asks her what colour her eyes are. A quick observation might be why didn’t Maria notice her silver eyes before? The answer comes from the camera perspective, where we switch to the view from her goggles and see that she is actually colourblind. Maria takes Ruby in her arms and tells her to focus on her loved ones. This thought summons the power of her silver eyes, destroying a large group of the Apathy in a white flash. The group are shaken awake, and Yang blows the cellar doors open, leading them back into the house. They find Qrow, and most of the group go to make a hasty escape, while Weiss smashes the remaining alcohol by the cellar doors and setting it alight, burning the surviving Apathy. This a nice call back to the previous episode, where Ruby comments that they won’t have any problems making a fire with the amount of booze there is. It’s also at this point that the audience sees something in Qrow’s eyes that they haven’t seen before: fear. It may be from the shock of the sudden discovery, but maybe he also has an underlying fear for these particular monsters.

As the group speed away to safety, Maria reveals that the Apathy drain people’s will to go on. As it turns out, Bartleby had been losing money and in a move to divert from Hunstman protection costs, he went out into the wild and separated a pair of Apathy from their pack, leading them to the farm and locking them away to keep everyone on the estate calm as a way of cloaking the settlement from other Grimm. However, the pack followed the missing pair through the waterway tunnels under the estate, sealing the fate of Bartleby and his family. The group feel regretful at their defeated attitude and are all the more determined to get the Relic to Atlas. Maria is upset that she didn’t see the signs of their existence, which implies that she was possibly a Huntress when she was younger. When Ruby asks Maria how she knew about her silver eyes, she replies by saying she had them once, “isn’t it obvious?”. She says it in a way that confirms fan theories and almost mocks fans who didn’t see it before. With Ozpin locked away in Oscar’s mind and Qrow shaken, it’s more than likely that Maria is going to be a new mentor to Ruby.

After a few slow episodes, the beginning story arc of the volume is over, and the story is finally advancing at a decent speed. Though it would’ve been nice to see the Apathy longer (perhaps they will continue to hunt RWBY on their trek to Atlas), the audience finally get an answer to what Maria will mean to the story and are treated to a tense, horror style episode that makes a change from the previous slow, dialogue heavy episodes. With this, the audience can look forward to more exciting developments in future episodes.

RWBY reviews will return in the new year.

Verdict
Scary, exciting, and interesting, ‘Alone in the Woods’ takes a different approach to the typical feel of RWBY and answers some questions.
8
Cultured Vultures is a pop culture website established in 2013 covering all things gaming, movies, and more. We eat your words.
All The News On The Biggest Games