Rogers Park (2017) REVIEW – Love And Loss In One Neighborhood 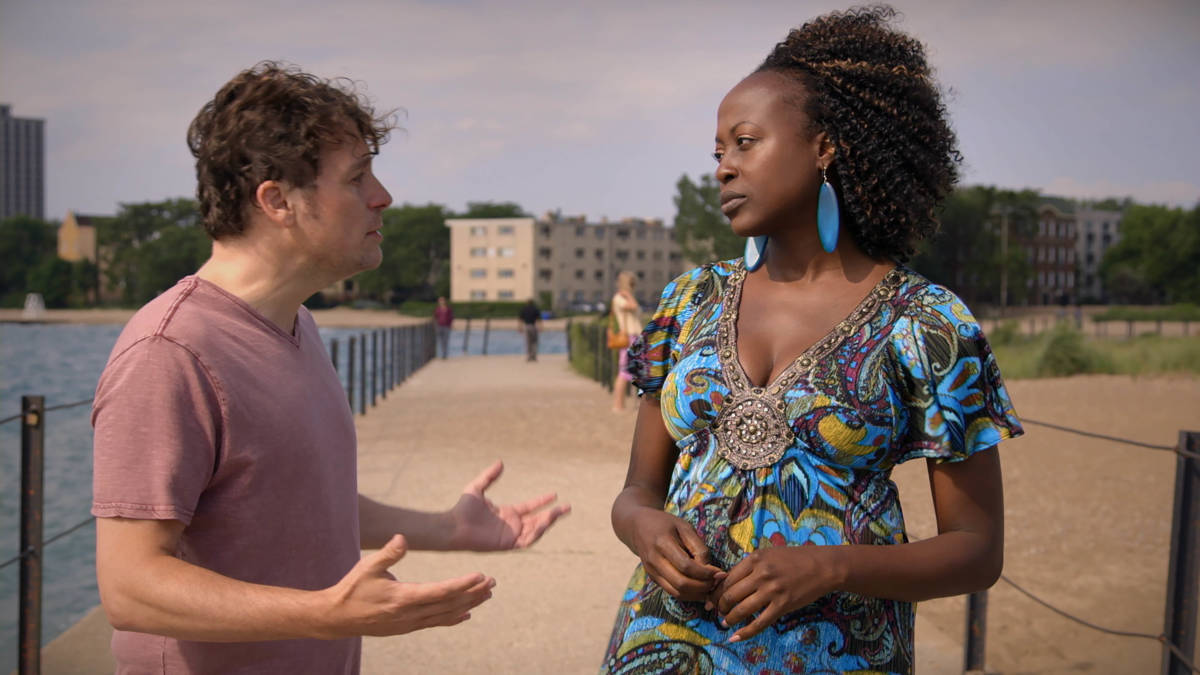 Plenty of movies, especially smaller, low-budget pictures, try to be a portrait of not only a neighborhood, but the lives of the people in it. And so many fail for various reasons. They’re too either sentimental, too dry, too judgemental, or, between the minuscule budget and focus on everyday life, simply not compelling enough.

But Rogers Park shines. It doesn’t just reference places and familiar sights, it anchors them with heartfelt, naturalistic performances from its two couples, who are at very different crossroads in their relationships. I’m rather biased in that I live very near the neighborhood of the title, and can thus appreciate that its depiction of it has all the warmth and quirks I’ve come to enjoy about it.

Even those who spend little time in the area can enjoy this film, which conveys the struggles of its four main characters with compassion. Chris is a writer who can’t seem to get going on his next book. He’s not only fallen into a slump, he’s still struggling with depression a year after the death of his abusive father, and his girlfriend Deena (Christine Horn), a community activist, is starting to lose patience and grow closer to someone else.

Chris’ sister Grace (Sara Sevigny) and her husband Zeke (Antoine McKay) seem to have it together, with Grace running a school she founded and Zeke seemingly having found success as a realtor, which has recently netted him a nice bonus. But their life may be less stable than it seems, especially with Zeke’s history of financial instability and other intimacy issues plaguing their marriage.

Rogers Park mostly eschews easy villains and or scapegoats. If the movie comes down on anyone, it’s Zeke, who unlike Chris, doesn’t seem willing to even try and fulfil his wife’s emotional, physical, or financial needs. But the judgement is relatively gentle. More astonishing is that when it’s revealed Chris and Deena have an open relationship, this is not in any way blamed for the problems plaguing them. It is the distance Chris has put between himself and Deena.

Refreshingly, it is also the women who complain about a lack of sex. Grace is practically starving after two years of deprivation, and Deena and Chris haven’t been intimate for a year. But where Rogers Park differs is its interest in how much people care about their relationships, not the way they go about living them. This is why Zeke is the one who suffers the harshest consequences for his actions, even as his wife Grace occasionally risks sinking into caricature, only to be saved by Sevigny’s skills. Zeke is not the one who seems to care enough to really work on his marriage. The damage these people inflict on each other can be recovered from, but with the caveat that adult happy endings will always require work.

So show “Rogers Park” to any film nerd who says that regional filmmaking is dead. It not only proves otherwise, it’s worth paying attention to on its own merits. Here’s hoping filmmaking duo Kyle Henry and Carlos Treviño, who directed and wrote respectively, will continue to bring movies of this caliber to the screen.

Verdict
Two Chicago couples struggle to stay together and in love in the neighborhood of Rogers Park in this deeply compassionate indie film.
9
Cultured Vultures is a pop culture website established in 2013 covering all things gaming, movies, and more. We eat your words.
All The News On The Biggest Games