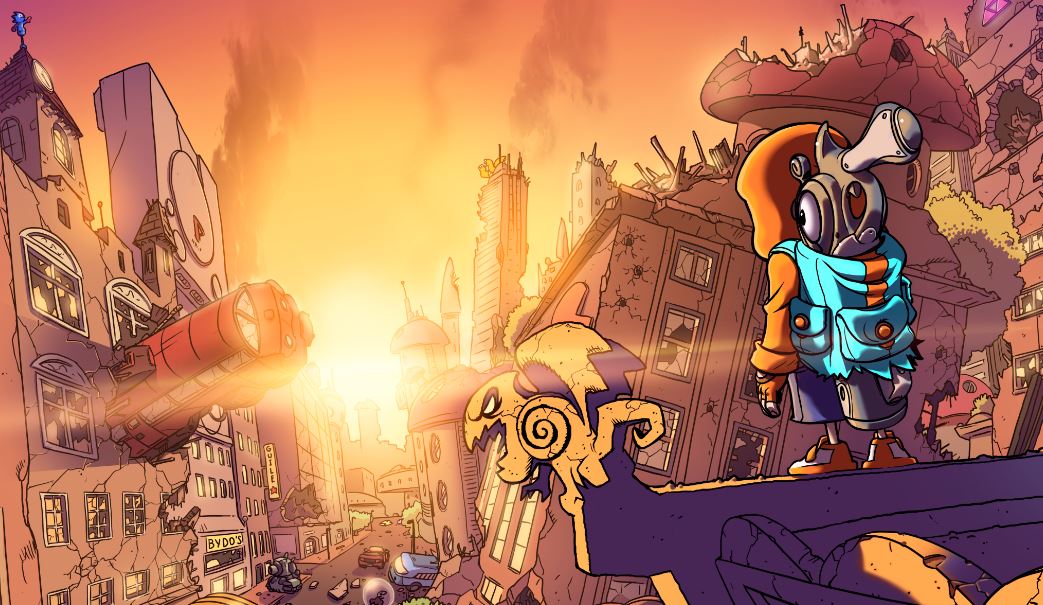 Don’t let its charming visuals deceive you, Rise & Shine is not for the faint of heart. Neither is it a title that you should let pass you by, easily shooting its way into contention for 2017’s finest. From the word go, Rise & Shine does its best to grab you and, even when you’re told to press any button to continue for what feels like the hundredth time, it’s hard to shake.

Adult Swim Games have a superb track record of picking up indies off the beaten track and bringing them to an audience they deserve. Super Awesome Hyper Dimensional Mega Team, second only to Supersonic Acrobatic Rocket-Powered Battle-Cars for least marketable name in the industry, have crafted a compelling love letter to gaming that means their partnership is a perfect match.

Opening with an attack on a shopping mall, Rise & Shine doesn’t afford you a second to breathe, putting a gun in the hands of its protagonist, Rise, within the first minute. Gifted to you by the mortally wounded Legendary Warrior, more of a headbang to Zelda’s Link than a nod, Shine is a wisecracking gun who’s the key to stopping the destruction of Gamearth. Along the way to RPG City, your ultimate destination, you will come across a cavalcade of homages to gaming and its heroes, whether that’s the brodude Megabadass or Mario in his throne room. 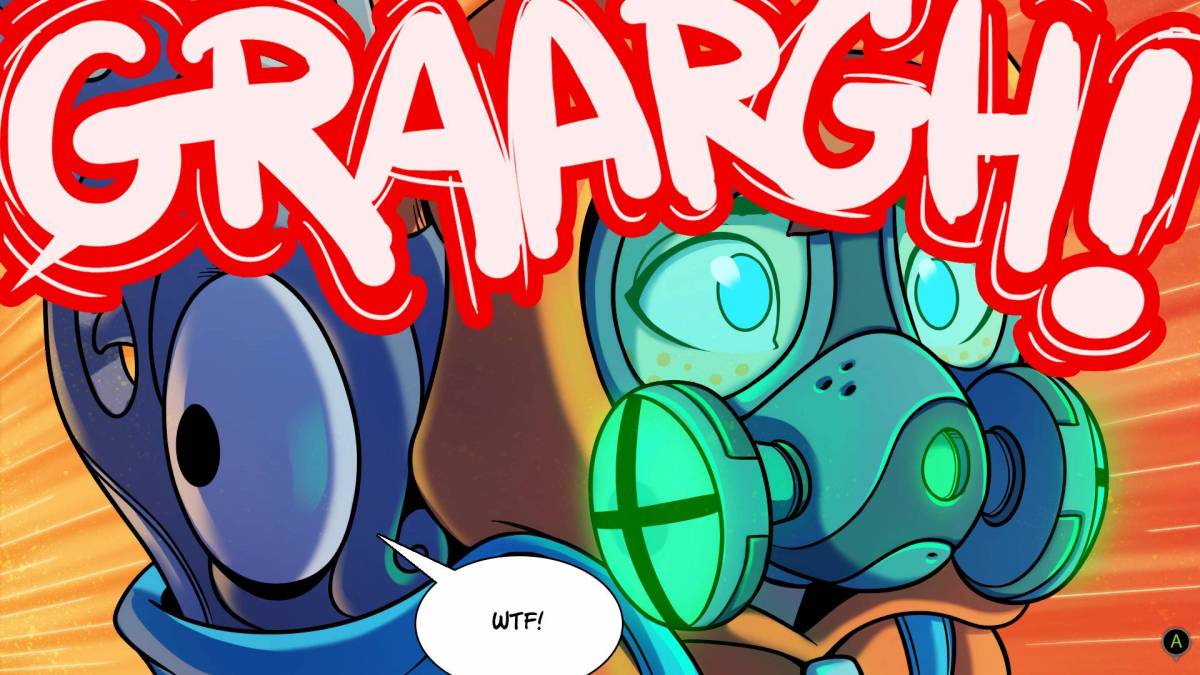 Despite a clear affinity for the history of video games, Rise & Shine never feels like a run and gun game trapped within its own nostalgia. It’s always moving forward, offering a challenge from its first shootout. As Rise, just an ordinary boy with the fate of a world dependent on his trigger finger, you don’t have any special powers to call upon, apart from the “ability” to respawn. It’s just you, your sarcastic gun, and your wits.

Combat can initially be vexing, asking you to use controls outside the contemporary norm. On Xbox One, this entails using the left trigger to bring up Shine, the right trigger to fire him, and the right stick to aim. It’s standard in FPS titles, but not quite so much in 2.5D side-scrollers. Switching between bullet types will likely offer the most confusion, though – I never fully had a handle on it, even when the end credits started rolling. While you try to get to grips with its unusual control system, Rise & Shine may grate, though as with any new experience, it’s worth sticking with until it just sticks.

Success in Rise & Shine depends on just how cross-eyed you can get. The screen will quickly fill up with enemies each with their own unique attacks to avoid, so focus is key. The most common types will shoot slow-moving lasers, but there are also those that use cover, fire acid, electrocute, and many more. Your left eye should be focused on Rise and the relentless assault he goes through, dashing and jumping out of danger, while your right should be trained on shooting down your attackers.

It feels like a rhythm game asking you to learn the patterns, having the know-how and co-ordination to see through each onslaught. This makes Rise & Shine one of the most difficult games I’ve played in some time, only slightly trailing behind last year’s Furi. Where The Game Bakers’ neon nightmare almost asks you to step away from the controller for a few minutes to collect your thoughts, Super Awesome Hyper Dimensional Mega Team’s effort’s inherent charm means that you will likely be glued to the screen, desperate to nail it this time. Despite somehow pulling of an angry handstand after yet another failure at the hands of the game’s final boss, I was back in the fray almost immediately (once the blood had stopped rushing to my head, of course).

Quite unusually, Rise & Shine has a cover system that feels perfunctory in its early stages, but becomes essential during the final third. That’s when the game really starts to twist the knife, chucking a seemingly infinite barrage of unkind propositions at you and asking you to deal with it. Using cover, which erodes over time, is all about timing and learning when to attack and when to sit back. It affords you the opportunity to strategise your next move, but depend entirely on it at your own risk.

Marketing suggested that Rise & Shine would have a wider selection of bosses to take on when in fact it only has two out-and-out boss battles. While this may be disappointing to some, it actually works in the game’s favour, meaning that both feel hugely important. Elsewhere, there are mini-bosses of sorts, but none as daunting as finally taking on the big bad seen in the prologue or the punishing encounter with the leader of NexGen, the group bent on destroying Gamearth, in Rise & Shine’s closing stages. 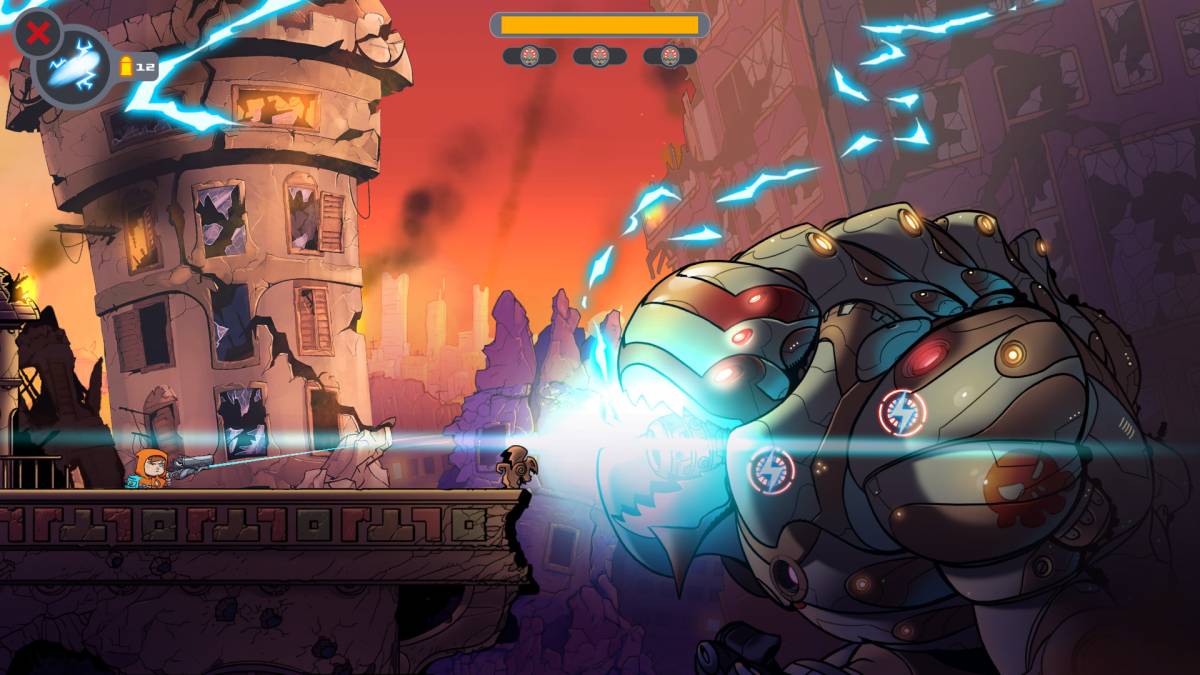 Rise & Shine could have quite easily breezed by on screen after screen of heart attacks waiting to happen, but it smartly introduces puzzles to keep the player level. These aren’t all that complex and depend more on dexterity than logical thinking, asking you to choose the appropriate bullet type to advance.

There are three distinct modes for Shine: regular, guided, and explosive. The latter two are mostly useful during puzzles, either allowing you to guide a bullet towards a lever to open a door or by exploding a path. The chin-strokers within Rise & Shine don’t take you out of the action for too long and are almost perfectly implemented so that they’re rarely too easy or too hard; they’re worthwhile diversions from the meat of the experience.

It says something about the game that I’ve yet to broach probably its most appealing aspect: the gorgeous visuals. Hand-drawn animated games are becoming more and more popular, though I’ve yet to see any quite as sumptuous as Rise & Shine. Its cutscenes are designed to look like single panes of a comic book and, although I was eager to continue Rise’s quest, I would usually just sit there and absorb their details. 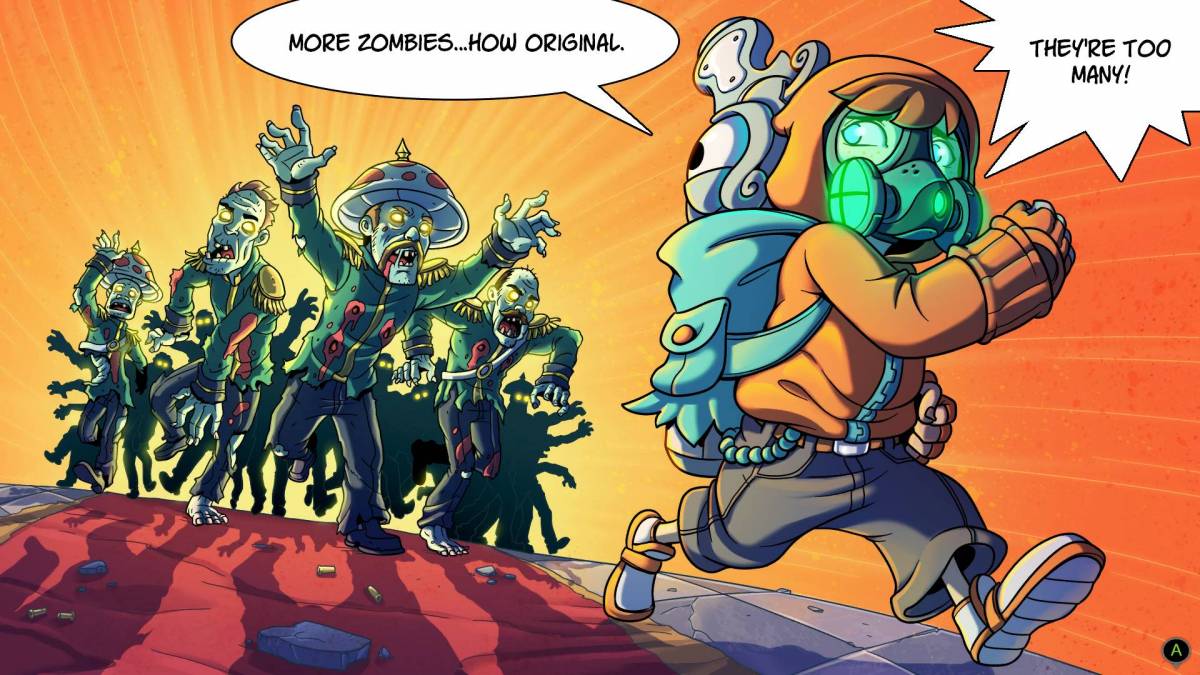 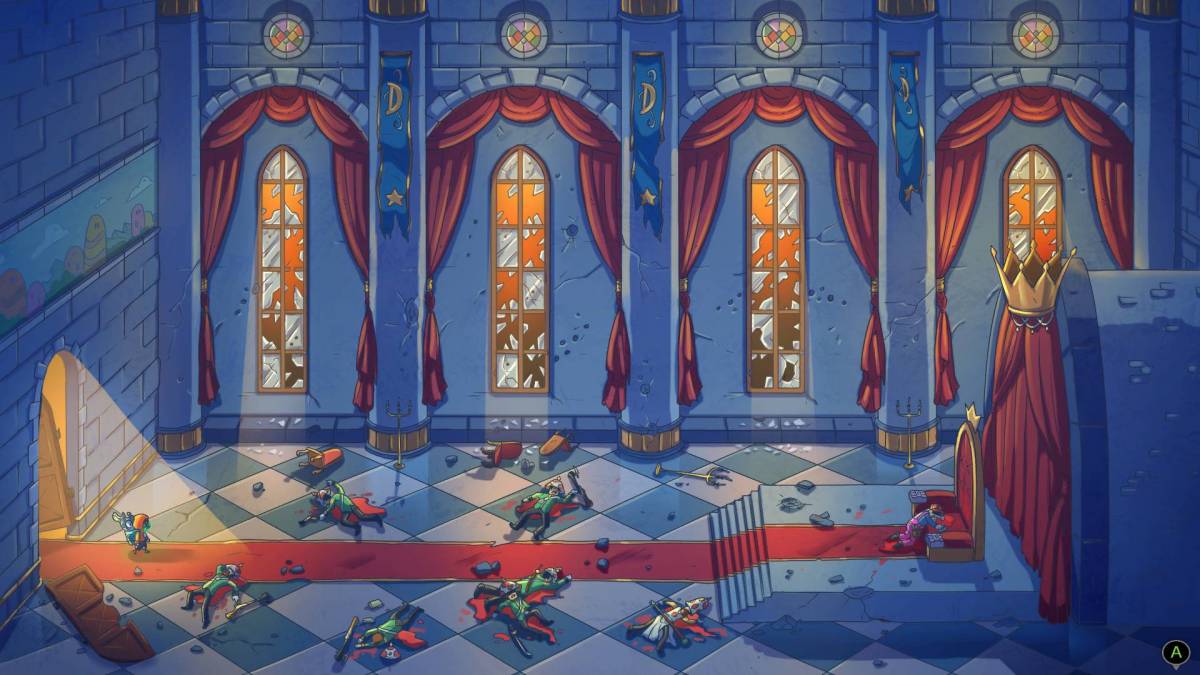 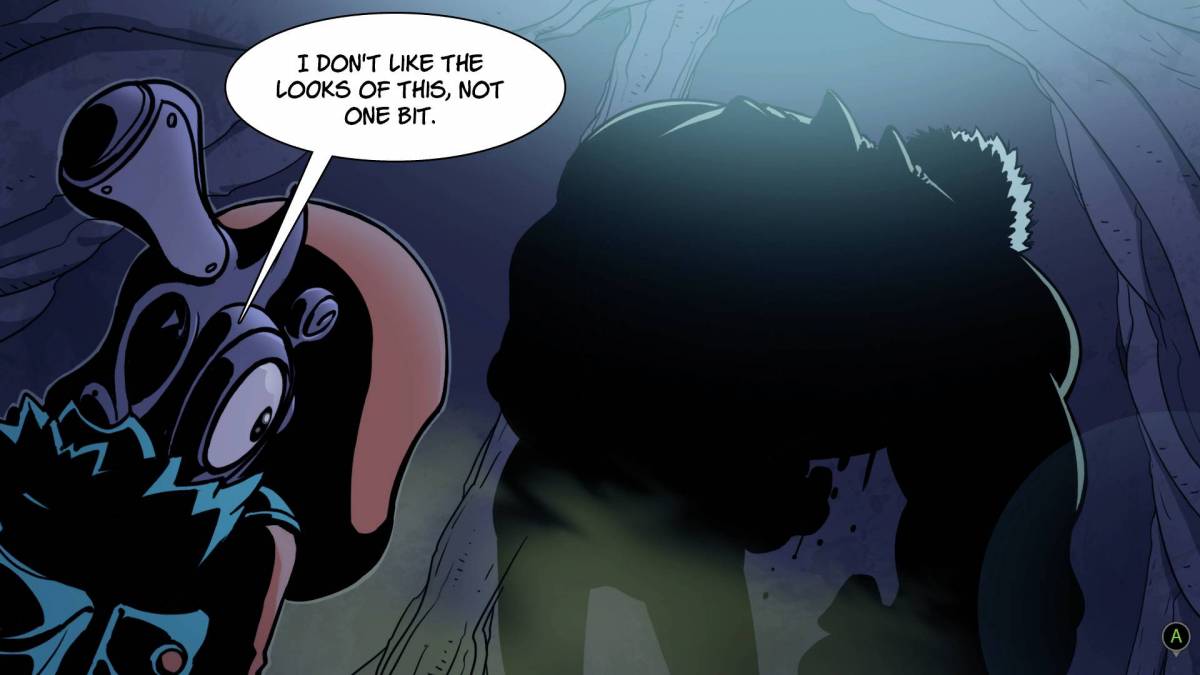 It’s lucky, then, that the beauty of its visuals do a lot to distract from the sometimes paperweight strength of its story. Rise & Shine does spend a lot of its narrative coasting on nostalgia and homages, but it flourishes well when it gets given space to craft its own story. Its characters fall just short of being fully fleshed out, whether that’s down to it being perhaps too self-aware with its jokes or simply not having enough time to weave in more depth in its 4-5 hour playthrough. Emotional punches don’t hit as hard as they should when tragedy strikes as the game doesn’t tell you enough to really make you care.

The story still works, sure, but I feel like that’s the only thing that may hold it back from hitting another level. That being said, when the gameplay is this good, the visuals this damn captivating, and its identity this unique while also being respectful of its inspirations, I would find it hard not to recommend Rise & Shine to anyone looking for something to kick off a new gaming year with.

2017 is still young, but I will be seriously surprised if this doesn’t end up on a list of my favourites of the year when December 31st rolls around.

Xbox One copy provided by publisher

Verdict
A love letter to gaming that has more than enough to stand on its own merits, Rise & Shine could be a dark horse for one of the best of 2017.
9
Cultured Vultures is a pop culture website established in 2013 covering all things gaming, movies, and more. We eat your words.
All The News On The Biggest Games