Riot: Civil Unrest is a difficult game to control that will try the patience of even the most ardent RTS player. 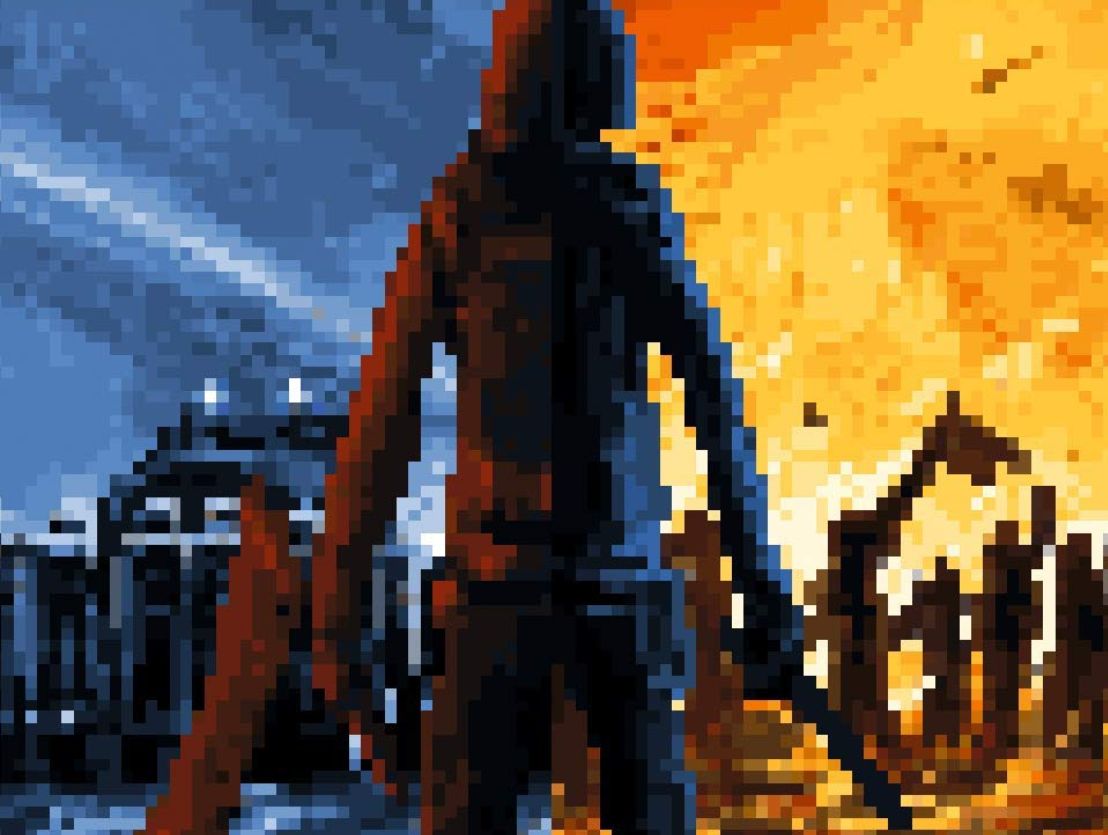 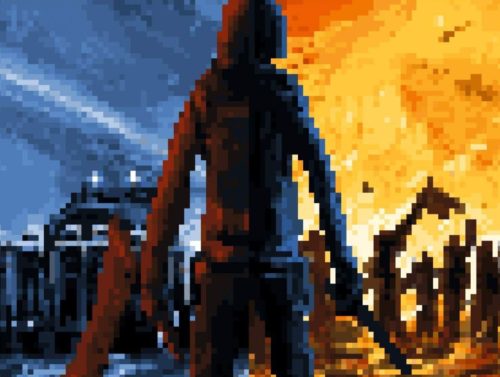 You only have to switch on your TV or check your social media feed at any given time these days to see that the world has all gone a bit pear-shaped. Anger, confusion, and unrest underpin almost everything socially and politically right now. So many things look to be at breaking point and everyone has a perspective in what history, sociology, and politics school exam papers, years from now, will ask: “Just what the hell happened post-2016?”

For as many memes we may try to post to block out all the bad, this day and age has a way of finding itself prevalent in all walks of life, so it was clearly only a matter of time before these charged times made their way into video games. Enter Riot: Civil Unrest, a real-time strategy riot simulator that’ll almost have you rioting against this game.

In Riot: Civil Unrest, you take control of either Rebels or Police, contesting the opposing faction across a number of locations, from Italy to Egypt, amongst other areas in the world that have been afflicted by the very civil unrest the title is so on the nose in referencing. You will have to push forward by taking either a passive or hostile approach in order to achieve various objectives, which can range from holding ground, taking it, or destroying objects like generators, although these are usually one per level. 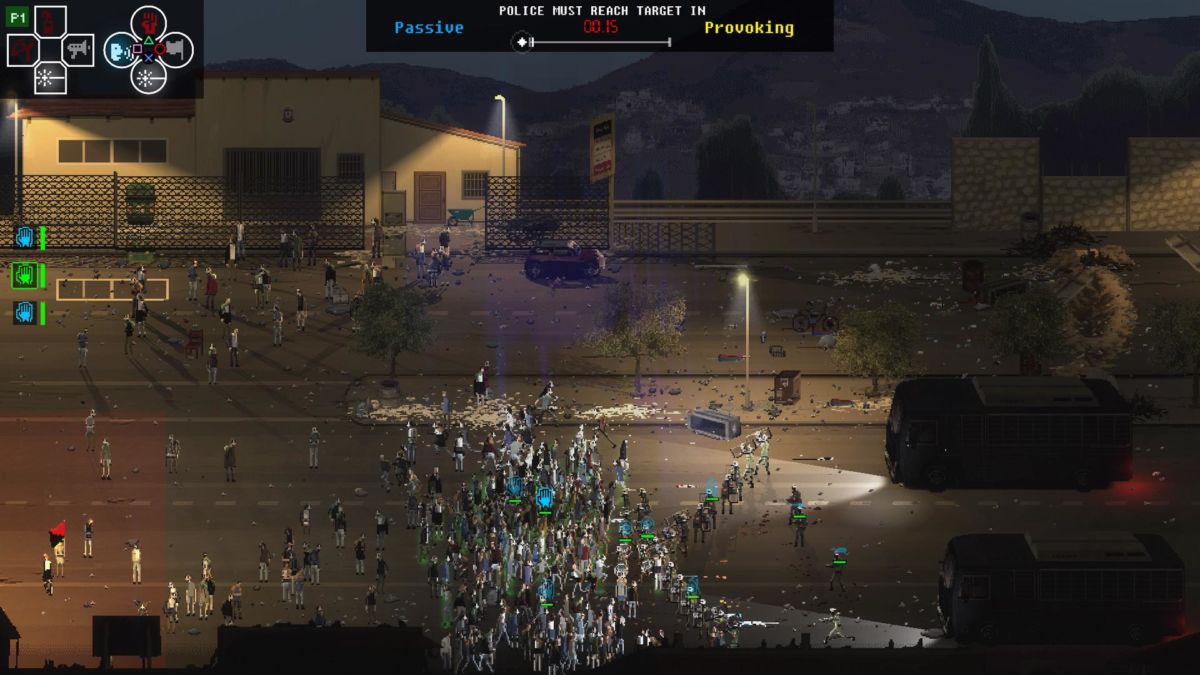 The game has three playable modes: Global, Story, and Versus. Global and Story make up the bulk of the gameplay but, despite a few differences, are largely the same. The story offers different settings with accompanying simple missions, whereas Global has more of a focus on the way you play your riots (gameplay style, for example), which then carry over into future battles that can either be a boost or deterrent to the public opinion of your forces. Naturally, if you act violently, not only are you more likely to incur the same response from your opposition but to also sway the public in their favour. However, if you take a passive approach, you may suffer more damage and injury to your group, but there is a far greater chance the public will back your efforts.

As you progress, the missions will become harder, although you will unlock more equipment and troops to assist in your plans. For example, as the Rebels, you can utilise a camera to take snapshots of protests in action which will aid in winning public opinion. You can also go back to previous missions to try and play things out differently, which has a knock-on effect to later levels. The Rebels are a lot easier to get to grips with, whereas the Police have subdivisions, such as a shielded class, which can bear the brunt of rebel force and push groups back, and assault class which, as the name suggests, do the most bashing and damage. On paper, it all sounds quite straightforward, but it’s as soon as the gameplay begins where the glaring problems await.

Frustratingly, Riot: Civil Unrest point blank refuses to give you any guidance or tips whatsoever as to how to actually navigate and play the game. Anticipating perhaps a tutorial level, I was thrown figuratively and literally into the deep end into the game’s first mission and, after passing it when the time limit had elapsed, I was completely baffled as to what had actually happened. You control three or more groups that you push forward with the left stick, while the right switches between said groups. The D-pad and face buttons swap between and use your different weapons and morale-boosting tactics to encourage your troops and push back the enemy. For example, it was only by chance that pressing the square button seemed to motivate one of my groups to shout a lot and stick together — I think. This severe lack of clarity and focus casts a huge cloud over the entire experience. 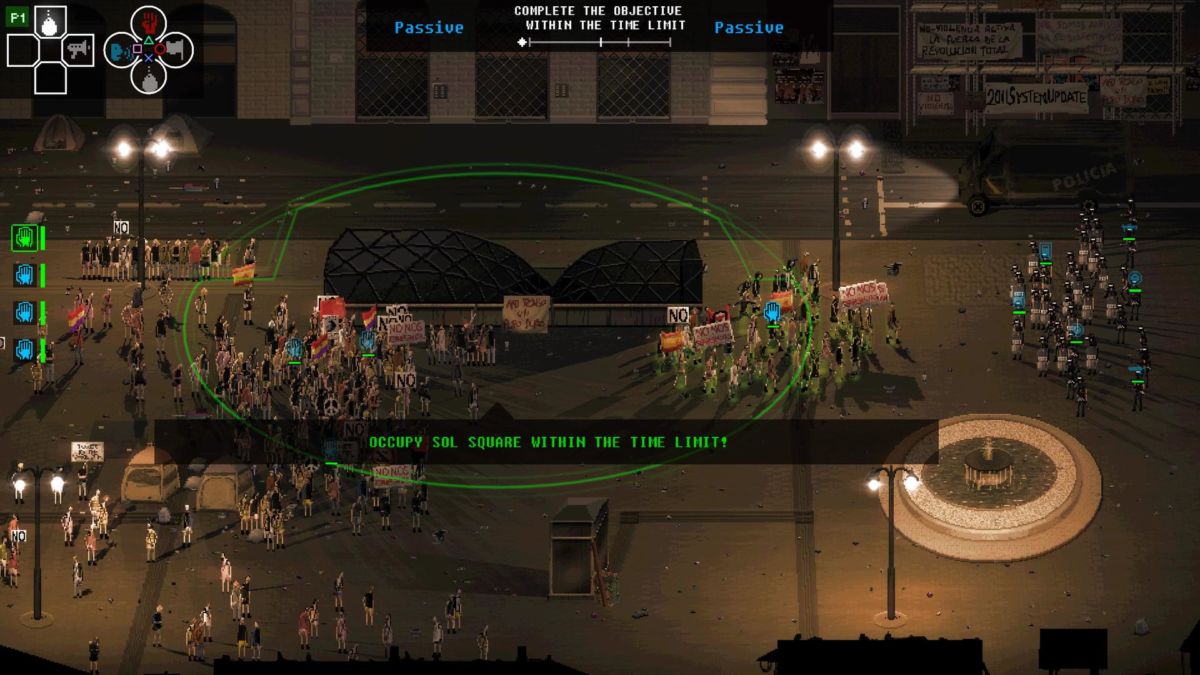 If Riot could provide any prompt, any indication that you are performing well or losing the fight, it would have made things easier. But it doesn’t. It remains stubbornly firm on forcing the player to figure out its methods and tactics. You will find yourself about to begin a level with nothing more to go on than the objective and it’s not always clear where or what this. There is often so much taking place on the screen that you’ll become overwhelmed. I didn’t want to press buttons wildly until something seemed like it was happening. I wanted to throw rocks or move a group forward but I was never assured I had truly made my move amid the mash-up of moving pieces at any given time.

Although each mission was limited to one screen, it became increasingly difficult to focus on everything happening and monitoring all my groups was a tedious process. I’d be attempting to march one group ahead, then having to swap to the second to flank the sides before manoeuvring the third to another defensive position close behind, but by the time I had, the first group had scattered or retreated, making this game more a delicate act of balancing spinning plates than progressing further under feint guise of strategy. Despite being able to modify your rioters prior to each mission, such as the armour and flags (I still have no idea what flags do), it only serves to increase or decrease your flock. Any items you might want to use, you will need to shift focus to scrolling through your groups until you find the one where that ability has reset — this really tried the patience. In reality, all the protests were not much more than a lot of pushing and shoving until the level finally ended.

Occasionally, a message will flash on the screen that details when a member of your group is injured or a snippet of dialogue from the enemy, but these rarely seemed to impact the clunky flow of gameplay and were just kind of there. You’ll get a final score at the end of each level, breaking down the day’s work. The only issue is that it’s essentially useless because you will be hard pressed to know where any of the actions even went down.. In one protest, at least four of my comrades suffered broken bones and it made absolutely zero difference to the mission. 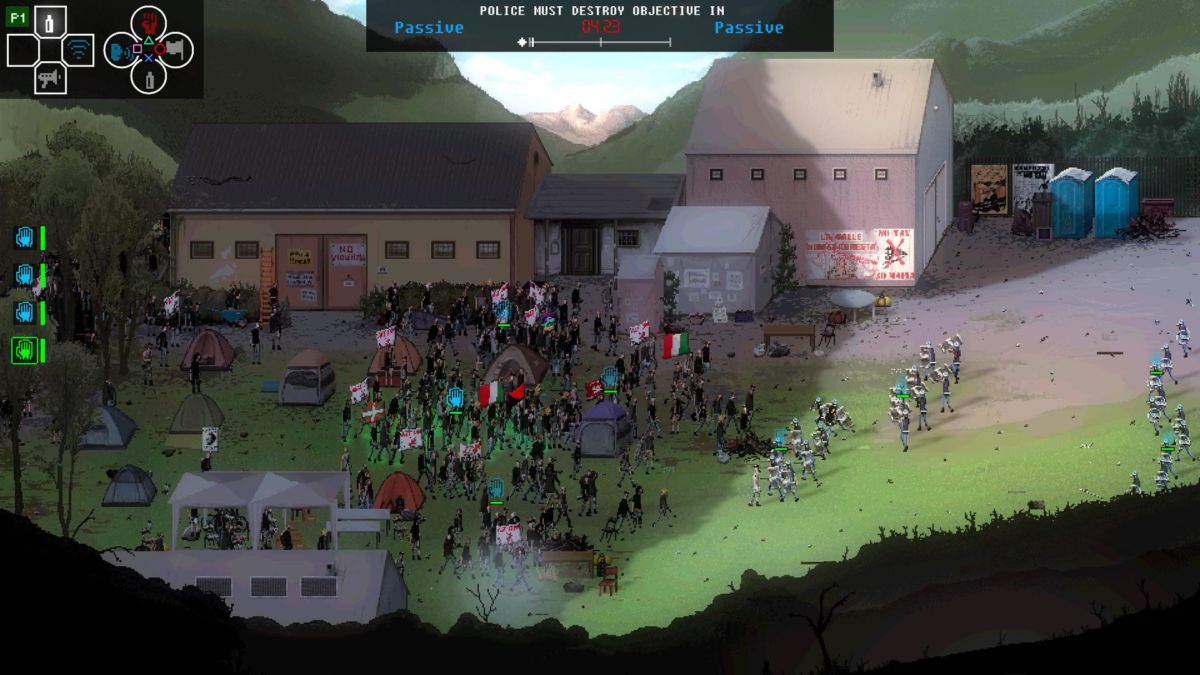 It would be a shame not to mention the genuinely delightful pixelated art style though, Riot’s one and only redeeming feature. It was one of the only fun aspects to be found and probably, sadly, will not receive the praise it rightfully deserves besides such an irritating game.

One of the first title cards you see as Riot begins encourages the player to research the real-world revolutions and discord it bases itself on but as unbiased as the game itself claims to be, you can’t help but wonder if, on some level, what the developers actually want you to be: Angry? ‘Woke’? Something else entirely?

The more of Riot I played, the less engaged I felt. After a while, I didn’t know anything more about these encounters than before starting the game and, if anything, I felt more and more distant from whatever message it was the game was trying to convey. The game felt alienating so early on and I had to force myself a number of times to keep playing. There was great scope here to hit home a message of protest, unity, banding together for a common cause — all of which were lost. Riot is a difficult game to control that will try the patience of even the most ardent RTS player.

Verdict
Frankly, Riot communicates nothing of importance about the conflicts it bases itself on and can barely support itself as a strategy game. I don’t predict a riot, but I do predict giving this title a miss.
3.5