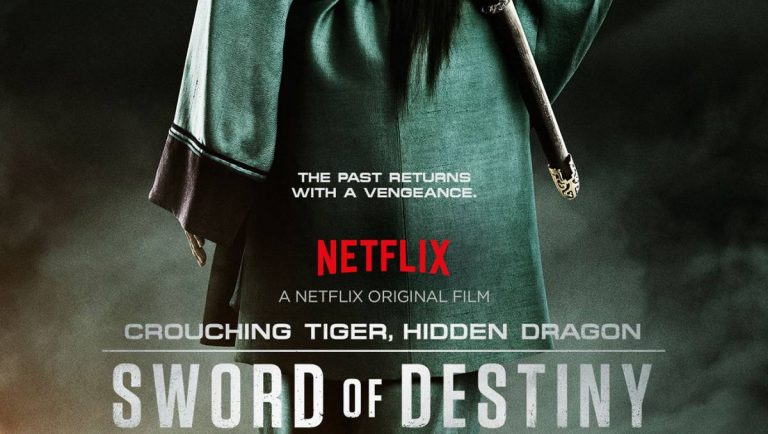 Yu Shu Lien, legendary warrior played by Michelle Yeoh, travels to Peking. On route, her carriage is attacked by mysterious, masked warriors. A horseman joins her in battle, and together they defeat them.

Meanwhile, a young woman named Snow Vase asks to join the ranks of these masked warriors. She attacks Hades Dei, the head warlord, and after a brief battle, she escapes. The horseman, named Wei Fang, encounters a blind enchantress. She Lein arrives in Peking, and an attempt to steal the sword known as The Green Destiny is foiled. Wei Fang is captured, and Snow Vase studies under Shu Lein. Four warriors are recruits to protect the House Of Te and The Green Destiny, and many battles are fought.

features the ballet-like choreography and imaginative wirework allowing athletic figures to leap across clay tiled rooftops often found in the wuxia films from the Shaw Brothers’ studios which influenced Ang Lee’s film. Unfortunately, this device lacks the magical, unexpected surprise that occurred when it was introduced to western audiences in the first film, which I attribute to both viewer expectation and a slightly mundane presentation.

With more action and less poetry, Sword Of Destiny is still a lovely, concise film with elements of humor, particularly the scene of a falling vase kept from crashing to the ground by a strategically placed foot, and an extended fight scene in a tavern utilizing a ladle of hot soup as a weapon.

The unfortunate use of CGI to cut corners, i.e., a phony chair breaking apart, and obvious, distracting green-screened panoramas, give a budget look to the film, although I enjoyed the CGI-assisted scene as Yeoh trains her new student in a walled, sunlit, golden garden using a pink-flowered branch from a cherry tree as a weapon, mirroring a key scene from Ang Lee’s masterwork, and a spectacular night-time fight scene on a partially frozen lake with a deep blue filter, substituting for the iconic bamboo treetop fight scene of the first film.

Regal, dignified, and powerful, veteran actor Michelle Yeoh brings the sage gravity she displayed in Ang Lee’s film, and she commands the screen whenever she appears. Donnie Yen goes toe-to-toe with Michelle Yeoh for sheer magnetism, and sadly the abruptly-introduced, and obviously disposable supporting characters, are less than memorable.

With its beautiful cinematography, impressive overhead crane shots, and sweeping, circular dolly shots, director Yuen Wo Ping does an admirable job trying to fill the shoes of Ang Lee. It’s somewhat unfair to say this film pales in comparison to a masterpiece. It’s still an entertaining, worthwhile view, and stands on its own if you haven’t seen the first film.