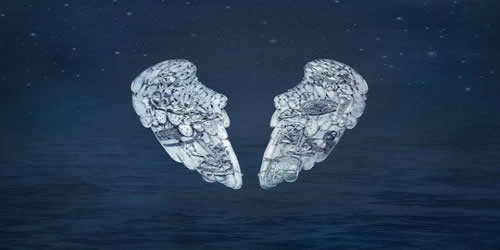 A new Coldplay album is always highly anticipated by the bands’ fans and peers alike.

Myself being one of those fans, I had the album on reserve for some weeks on iTunes. I had not been one of the fortunate few to attain tickets for the pre-launch Ghost Stories tour so had to wait patiently for May 16th to listen to the new long awaited tracks.

The album is 9 songs long and 43 minutes in total play time, including the hidden track “O” which has caused some fans to be disappointed from the offset, complaining about the expense for such a short play time of music, with the average Coldplay album listing being at the fourteen track mark, I can understand their point of view.

So musical hopes where raised even higher with the “quality not quantity” promises of Chris Martin & the gang. Melodically, the album is haunting and most definitely lives up to the Coldplay standard of lyrical polish. But they have taken such a different approach from the last album, Mylo Xyloto, that you could say that if Chris’s vocals were replaced you would not think it was it was Coldplay.

This again has given some critics the chance to complain that it’s too much of a contrast to where Coldplay have been heading, I personally feel they have stripped back the music to its purest form, and found not so much a new direction, even though it’s been described as a transitional album, but have returned full circle to where they first began.

Opening with the stunning and ethereal ‘Always in My Head’, I’m taken back to the very first time I heard ‘Yellow‘. Its simple, clean lyrics and gently building rhythms introduce the listener to the feel of the album.

Onto track two and recently released single ‘Magic’, you soon begin to realise this is a slow burner. It is the first song contributed by the band’s bass player Guy Berryman who has always been the least forthcoming of the group with musical offerings. And this has been one of the two most acclaimed tracks on there so he must be rather pleased with the response.

‘Ink’ takes a slightly more uplifting approach and the lyrics are simple, verging on juvenile: “got a tattoo and the pain’s alright”. Saying that though, it’s one of my favourite tracks and is hard to get out of your head once heard.

Tracks four to seven really all plod along in the same vein. Melodic, haunting and somewhat sad, verging on depressing, but equally pretty and unmistakably well crafted.

You soon begin to understand the title of the album; Chris has taken his own ‘Ghost Stories‘ of his marriage and is allowing the listener to follow him on his journey from the first realisation a relationship is ending to the pain and loss of the breakup.

As Mr Martin himself said:

“The idea of Ghost Stories, for me, was “how do you let the things that happen to you in the past – your ghosts – how do you let them affect your present and your future?” Because there was a time when I was feeling like they were going to drag me down and ruin my life, and the lives of those around me. I was very lucky to meet a very good sufi teacher who started to introduce the idea of “if you sit with your experiences and the things you’ve been through, they alchemize.” At the time he said that, I didn’t really know what that meant, but I trusted that it would work, and the more that I was learning about that, the more music just started flowing through”.

When you first listen to the final track ‘Sky Full of Stars’, you could be forgiven for feeling it is like a square peg in a round hole but after the sadness and almost hypnotic tracks before it, you find it lifts you to a euphoric place and for which you are grateful to Chris for insisting that this track was put on the album. My sources tell me he had to twist his other band member’s arms to get in on there! He knew it would fit and he was not wrong, it’s a classic Coldplay anthem which goes a long way to redeem the melancholia of ‘Ghost Stories’.

In all, I would say it does not create anywhere near the musical impact that ‘2000 Parachutes’ did but Ghost stories most definitely has its place in the Coldplay archives as the album which marked the band’s change towards biographical lyrics and in turn, gave us an almost voyeuristic look into Chris’s marriage and conscious uncoupling.