I’ve been to a lot of live events and seen and heard some fairly unique things. I’ve been in the front row at Fortune Theatre as a woman in black with a wasted face crept down the aisle towards the stage, I’ve watched a cartoon caricature of Simon Cowell caress his nipples as he begrudgingly introduced Rage Against the Machine to the stage at Finsbury Park and I’ve been part of a bustling chorus of Robot Wars quotes being hurled at Craig Charles while he desperately tried to DJ. Nothing could prepare me for Orchestra of Samples though.

I’d spoken to Addictive TV’s Graham Daniels a few weeks prior and he had certainly sewn the seeds of excitement in my mind, but I’d never really been to a dedicated AV gig before so even having watched live footage and seen the YouTube version of Orchestra of Samples, I still wasn’t entirely sure what to expect. That atmosphere of excited trepidation seemed to be fairly universal when we arrived. I brought another Vulture, none other than Stacey Warner, along with me to see the show (that might not seem like a big deal, but I must emphasise that CV staff very, very rarely actually get to see each other in person, it felt like some kind of coven) and she was equally unsure of what we were about to witness, but the presence of several obscure, archaic looking instruments on the stage alongside the laptops and projector screen only made it all that much more enticing. 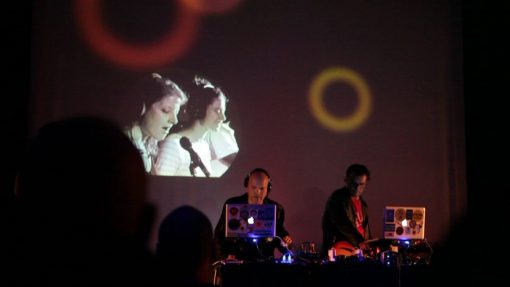 In the most direct terms, Orchestra of Samples is a live-mixing AV show which has Addictive TV using an archive of video samples they’ve recorded over the past half-decade all over the world of musicians ranging from singers to sitarists to beatboxers to far more obscure fare like hang players and fundamental, esoteric things like groups of children clapping in time. In a live context, the duo will bring other musicians with them to phase in and out of the show at intervals depending on as and when they’re needed. If your mind is having trouble making sense of all that, don’t worry, mine was too. We got a bit more time to ponder once we got there though, as the night was opened with a short, haunting set by the immensely talented Welsh singer/songwriter Kizzy Crawford. Putting aside for moment the fact that she’s 18 (yes, 18), her constant switching up between English and Welsh, neo-soul, jazz and traditional singing styles, guitar playing and violin playing and inventive pedal-looping made for a fascinating, engrossing performance. Did I mention that she’s 18? When I was 18, I learnt how to make an apple bong, not sing in two languages in the same song.

Once Kizzy (who is fucking 18) was finished and after a bit of a lull, Addictive TV took to the stage and the fun began. Immediately they broke into it and began intermingling clips of singers, guitarists, flutists and whatever else and my brain nearly went into short-circuit. What was this? Was it hip-hop? Folk? IDM? I didn’t know; nobody knew, but it didn’t seem like anyone really cared once thing got going. Bass6 (of Beatbox Collective fame) eventually turned up on stage and added his stylings to the proceedings, accompanied by violinist Shona Mooney. Stacey pointed out that everyone in the crowd was kind of going at their own pace, dancing in different ways, at different speeds, or not at all, it didn’t matter, there was no wrong answer. So many different kinds of instrument and style were being thrown into this ongoing, consistent mix that it was impossible to isolate one particular through line and after a while you just stopped looking and ran with it. At one stage during a distinctly Indian-sounding segment a set of bagpipes suddenly appeared and fit so perfectly that I threw my hands up in elation and yelled some conjunction of ‘WHAT’ and ‘HOW’ that probably sounded like a cow sneezing. 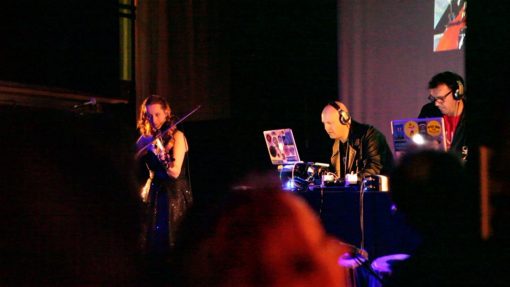 Speaking of cows, Graham and Mark wisely took the time between tracks to provide some context and anecdotes to go along with everything else, at one point showing footage of a cow they’d happened upon in Bhutan that had been contentedly snacking on the marijuana that grew naturally on the rolling hills. It made the whole thing feel a lot more personal and intimate, which given the relative small size of the Rich Mix stage, made a lot of sense. It was around this time that they brought on their third guest, Indian sitarist and percussionist Baluji Shrivastav. He had to be guided to his place on the stage, but once he got there he injected a really potent catalyst into the show. As well as playing the drums and sitar, Shrivastav would periodically break into bouts of traditional Konnakkol vocal percussion, which is stunning enough when you hear it recorded but to see it live was a rare treat, especially given everything else that was going on. Eventually, all three musicians appeared on stage together, and the show rounded out, leaving the audience staggered, satisfied and exhausted.

It really was like witnessing a kind of live history lesson, a glimpse into the very essence of music, it was confusing, exciting and inspiring all at the same time and nobody quite seemed to know how to react to it, half the fun just came from watching the people around you, but again there was no sense of anyone feeling uncomfortable or perturbed, just gloriously befuddled. After Addictive TV were done Howie B hit the stage and clearly reading the room, threw out a rippling, but mellow electronic set that was mobile enough to dance to but not overwhelming, since so much of the crowd was still so bewildered and eager to vocally unfurl everything they’d just absorbed. Addictive TV have hit something very special with Orchestra of Samples; they are appreciators as much as artists, and they’ve found a near-perfect means to communicate that passion.