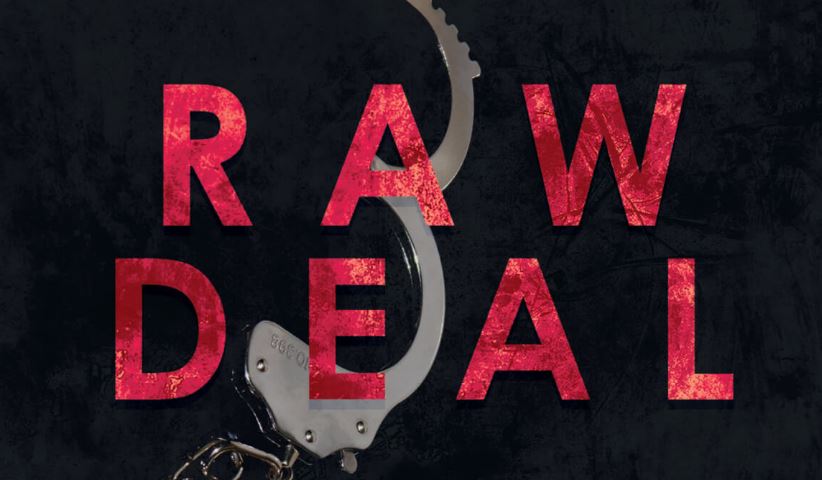 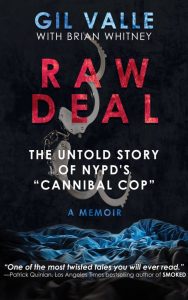 In 2012, New York police officer Gil Valle was arrested on a charge of conspiracy to commit kidnapping.

His wife had discovered that Valle was a member of Dark Fetish Net, a website dedicated to extreme fetishes involving rape, murder, torture, and cannibalism. Gil had been chatting with several members about kidnapping, murdering, and cannibalizing multiple women. While Gil was initially convicted, the ruling was overturned shortly thereafter on appeal. The judge had determined that there was no sufficient evidence that Valle’s chats were anything beyond fantasy roleplays. This memoir, Raw Deal, co-authored with Brian Whitney, is Gil Valle’s side of the story.

“I think we would all agree that people should not be jailed for thoughts. But when, if ever, does a thought cross the line and become a crime? There needs to be some action, obviously, but how much action? I am not sure what the answer is.”

While it’s obvious how uncomfortable the subject matter will be from the beginning, the prologue hits us with it full force. We get a sample of what Valle’s online chats were like with a story describing kidnapping a woman, taking her to a secluded cabin, torturing her, and cooking her alive. In the first chapter, we immediately see the contrast with Valle describing his rather average childhood in Queens, New York.

While Gil describes his life, he contrasts it with his discovery of his cannibal fetish, explaining how he discovered bondage websites as a teenager and soon found himself attracted to darker types of pornography. He portrays his love life as average and unsatisfactory, not even losing his virginity until the age of 25 to the woman who would become his wife, but satisfying his dark fantasies through his internet browsing and chats.

While he hides his fantasies from the people in his life for the longest time, eventually his wife Kathleen discovers the chats and leaves him, taking their daughter with her. The FBI arrest him after his wife reports him. He goes on to describe his frustrations with the legal system. He’s denied bail, the prosecutor painting him to be a danger and a flight risk, and facing manipulation from the US Attorney’s office who seem to have it out for him.

I once read that the most difficult part of writing an autobiography is avoiding painting yourself as a hero or a victim. Valle is very solidly painted as the latter is this memoir. Still, I couldn’t help but sympathize with him. As someone who knows people who’ve had deal with the legal system, and who’s had bullshit legal problems of my own, it’s something I wouldn’t wish on anyone. Especially considering Valle was facing down life in prison even though he never harmed anyone.

Valle was using pictures of his wife and of other women he knew in real life in several of his chats as aides. Obviously, this is incredibly creepy and Valle admits as much. Still, it’s not illegal. The photos were publicly available on social media. The prosecutor attempted to use this as evidence. However, they found that little to none of the information he gave on the women during his roleplays was accurate.

A big part of what makes this book fascinating is seeing the contrast between Valle’s extreme interests and his normal life. He notes that the two in his mind were completely separate. Even when his wife discovered his more softcore bondage porn on the computer and offered to help him indulge it, he couldn’t bring himself to go to the sex shop to pick up the handcuffs. It seemed inconceivable to him that he could act out even the softest of his fantasies. This kind of divide is something that many of us probably feel online, especially when we’re behind a screen name. Many people treat their online personas as something completely different from who they are in their everyday life.

I couldn’t confirm every fact in this memoir, but from what I was able to find, Valle’s recounting is accurate. One is tempted to question why the FBI wasted time on a case that didn’t even have any victims. My own paranoid speculation is that it would set a precedent on what the FBI could arrest people for in regards to their online activity. While Valle’s conviction was overturned, there’s speculation that the case could be appealed to the Supreme Court. I can only hope that this doesn’t happen. Not only has Valle suffered enough for committing what is at worst a victimless crime, but the last thing we need is broader power to law enforcement over what people say on the internet.

We often hear of police who are protected by their departments for committing murder, domestic violence, and assault. Valle received none of this. The book doesn’t get much into this, only noting that he received no support from the NYPD, either legal or moral. I can only assume that the lurid nature of the accusations was a big part of this. A cop outright murdering an unarmed man can get off with a paid vacation, but a one who is arrested for indulging in online fantasies off the clock gets dragged through the legal system and nearly faced life in prison.

Of course, it’s still possible that Valle will still end up killing someone and co-author Brian Whitney will end up being Norman Mailer to Valle’s Jack Abbott. But based on everything I can find on this case, this memoir included, that seems highly unlikely.

Verdict
Raw Deal is a fascinating read about a strange but important case. It brings up several important questions. Where does free speech end and intent to commit a crime begin? Where does the internet and real life intertwine, if they're even separate at all? What powers should law enforcement have over the internet? I highly recommend this book and I encourage anyone who reads it to look further into the “Cannibal Cop” case.
8.5
Cultured Vultures is a pop culture website established in 2013 covering all things gaming, movies, and more. We eat your words.
All The News On The Biggest Games