Pokémon Scarlet and Violet: How To Level Pokémon Up Quickly 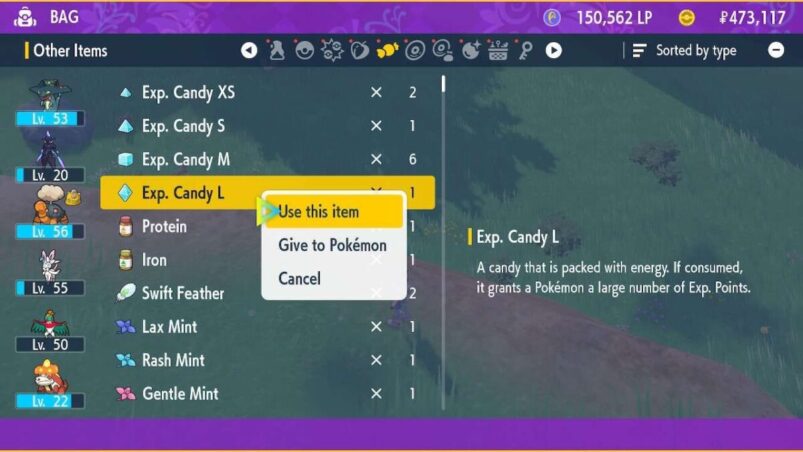 With three main storylines and plentiful extra content in the game, trainers in Pokémon Scarlet and Violet may need to rely on a large number of Pokémon to face everything thrown at them. Having a solid team as well as reserves in case of unexpected scenarios is one of the most valuable things to achieve in the region of Paldea. Here’s how to level your Pokémon up quickly and farm as much EXP as possible in Scarlet and Violet.

Taking part in Tera Raid battles is one of the fastest ways to level up in Pokémon Scarlet and Violet. Entering the higher-star raids rewards a lot of Exp. Candies which you can use as you please on whichever Pokémon you’re looking to level up fast. The five-star and six-star raids are the most efficient for this, but they aren’t unlocked until after the main story. Before then you can access four-star raids which still provide a respectable number of rewards.

To fight in Tera Raid battles, you can seek out Tera Crystals in the overworld which are marked by a star-shaped icon which includes the Pokémon’s Tera typing. Interacting with the crystal will launch the raid. The Pokémon’s sillhouette will be visible on the main screen as well as the options to challenge solo or as a group.

Another way to level up your Pokémon quickly is to hunt down Pokémon that are more powerful than yours. Due to the games being open world, areas with high-level Pokémon are easily accessible from quite early in the game. The battles will be tougher, but using a Pokémon with a type advantage against the one you’re battling will be invaluable. Defeating these strong Pokémon will reward a high about of EXP. This is much more effective when a Mass Outbreak is taking place. These indicate an unusually high number of a certain Pokémon in one area and are marked by Pokémon icons with red symbols behind them on the overworld.

Another way to gain EXP is by eating sandwiches with Exp. Point Power as a benefit.

This increases the number of EXP gained from defeating Pokémon of a certain type. For example, a Cheese Sandwich gives Exp. Point Power against Steel, meaning defeating Steel-type Pokémon will give the most EXP. Another sandwich benefit is Encounter Power which increases the chances of encountering Pokémon of a certain type in the world. If your Pokémon has a type-advantage against those Pokémon, it can be a very quick method of levelling up.

Catching Pokémon in order to fill the Pokédex also gives EXP, so kill two birds with one stone and level up while achieving rewards for unlocking more of the Pokédex.

As is the case with previous Pokémon games, defeating Chansey or Blissey gives more EXP than any other Pokémon. Catching them will also yield the same effect. Similarly, make sure that you battle all the available Pokémon trainers on your travels across the Paldea region. They reward more EXP than wild Pokémon but also hand over money and other rewards for beating them.

Auto-battling is a feature included in Pokémon Scarlet and Violet, and it does enable Pokémon to earn EXP passively while you’re traversing the world. However, it doesn’t give as much EXP as if you’d fought the Pokémon manually, and the remainder of your party will earn less than half. The feature therefore isn’t recommended for quickly levelling Pokémon.