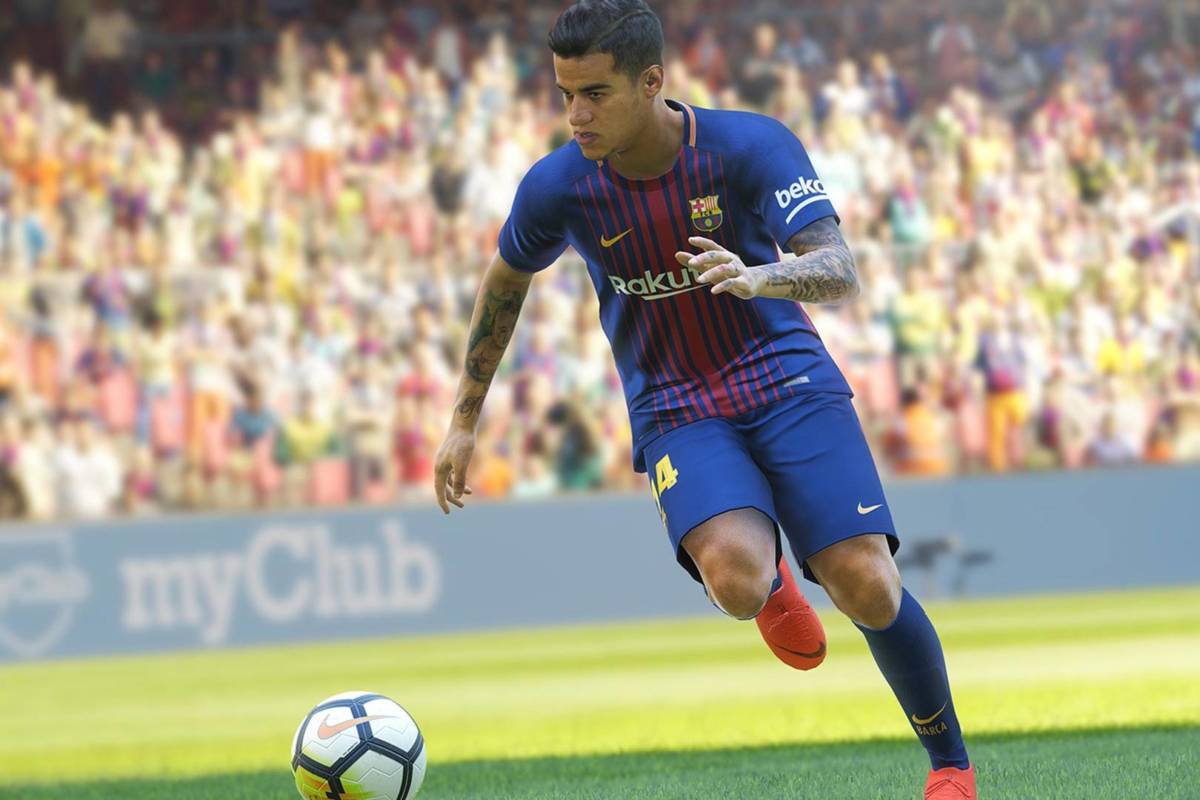 Pro Evolution Soccer has always been the ugly sister to FIFA’s annual juggernaut, but regularly had far more substance underneath. Year on year, it seems they’re getting better at finally marrying great gameplay and great looks, recalling those glory years on the PS2. So have they done it this year? Well, yes and no. PES 2019 is very good, but it definitely has some flaws.

Ignoring FIFA for a minute, PES has always done its talking where it should always matter when it comes to football – on the pitch, and this year it is again superb. As previously mentioned in the demo reaction a few weeks back, it plays like real football. Players’ runs feel natural. Shooting is fair depending on who has the ball at their feet. Long passing feels glorious when achieved. Even your simple short passing is, while very loose, fluid and fair. If you hold down the pass button for too long too close to a teammate, it won’t come off. You won’t be able to pick up and play, especially if you’re new to the series, but if you spend some time to learn the mechanics, you’ll be a deserving league winner in the end. 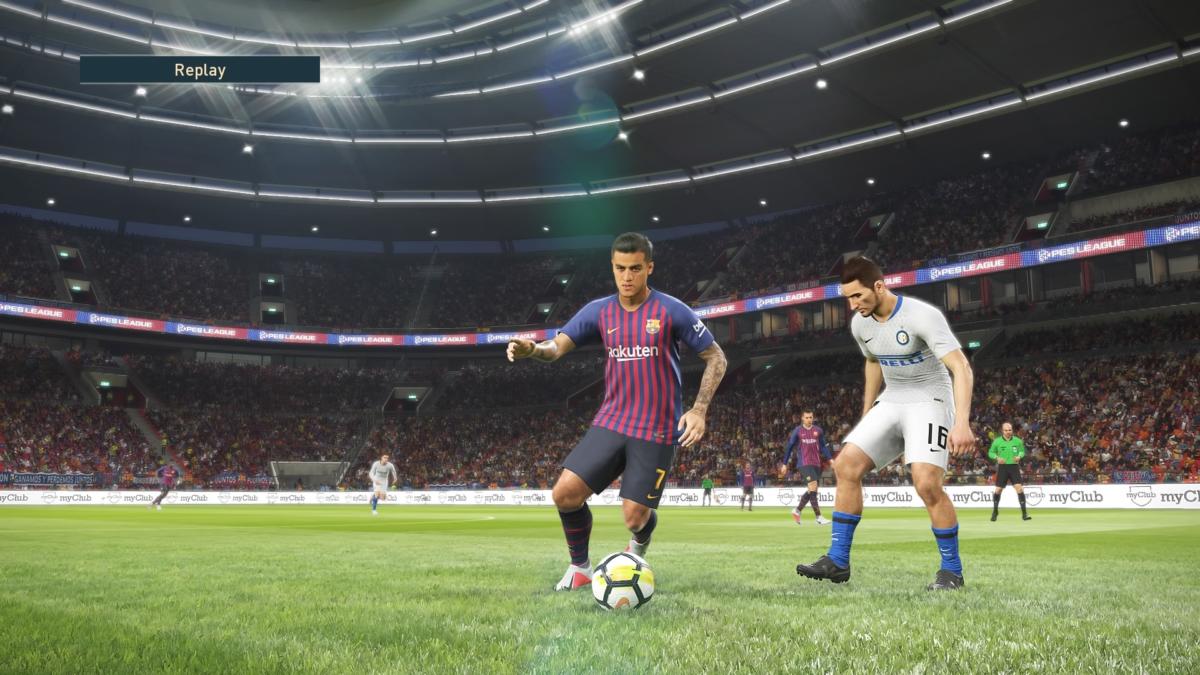 Tactics, and your knowledge and willingness to embrace them, will ultimately be the barometer as to whether you’ll be successful or not against teams, particularly your Barcelonas and Reals of this world. Advanced tactics do seemingly make a difference this year. Playing one game as my beloved Man Red (more on that later) in a Manchester derby, I deliberately set up my team to counter-attack playing with a counter target of Romelu Lukaku, who would always stay high up the pitch regardless of what was going on elsewhere. City, by default, play a pressing game, so knowing this, as soon as I had the ball, it went straight up to Lukaku who could usually run with only minimal defenders blocking his path. Seeing the sight of Lukaku bringing the ball down from a 30 yard, over the top through ball from Jesse Lingard, running on to goal and smashing it in at the keeper’s near post was a joy to behold. Advanced tactics like this have been in the game a while now, but they’ve incrementally been getting better at influencing games. This year they’re better than ever and its where PES shines brightest.

In-game, however, goalkeepers are still hit and miss. David De Gea is the best goalkeeper in the world, but in PES 2019 he still flubs long range efforts if the shot is from a half decent player. Goalkeepers are too often guilty of parrying the ball into dangerous areas of the box where rebound shots frequently happen with too much ease. But then there’s plenty of times where snap-shots are reflex saved, and while very frustrating you can’t help but feel they’re justified. Well, if you’re not losing 2-1 with five minutes left on the clock like I found much to my annoyance in a Eredivisie league game as Ajax vs. ADO Den Haag. It’s exhilaration like this that make up for the lows. 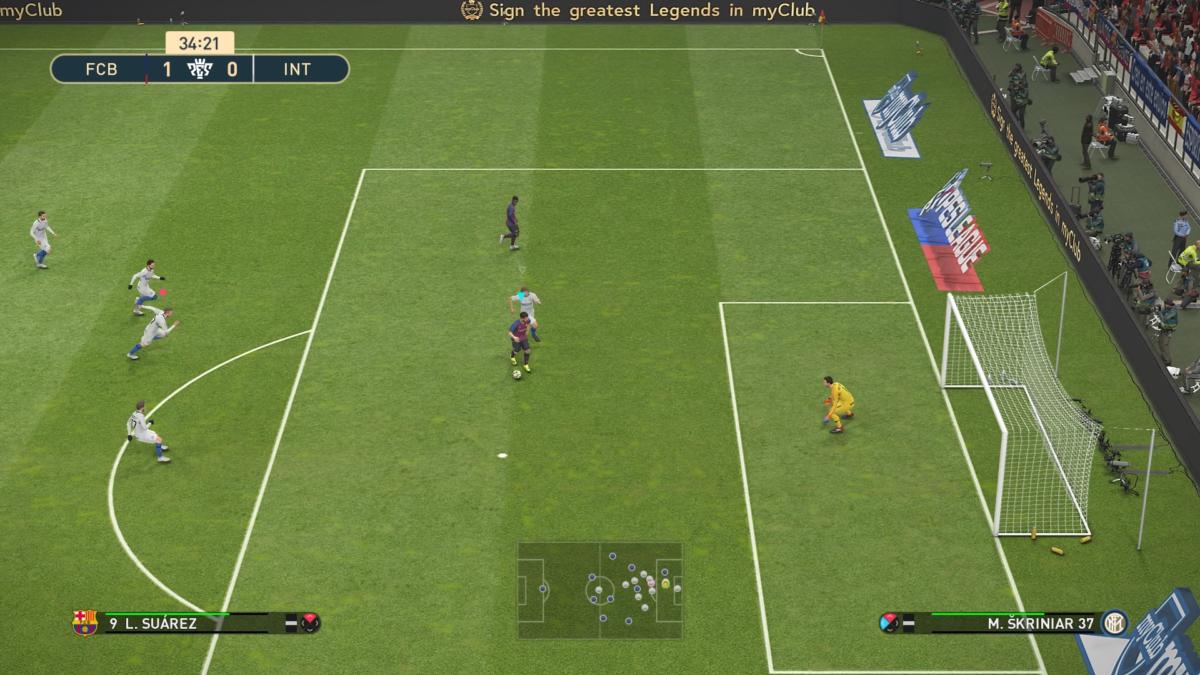 The AI in every other position is top notch, though. Defenders block realistically and can be quite tough to get around, so whether it’s you weathering an attack or doing your damnedest to break a team down, you know you’ll be in safe hands/in need of a good play depending which end of the pitch you’re playing in. Forwards as aforementioned do make good runs if you’re in space behind them. Better players can unlock defences with good passes because smarter forwards make those all important runs. It takes some time getting used to, but if you put the hours in, it will pay off.

Speaking of putting in the hours, football games as we all know need a hefty load of modes to make them worth your money, and PES is no exception this year. There’s your standard modes of leagues and cup competitions, become a legend and the all encompassing Master League mode (I will turn a Championship team into Champions League winners in 5 years, just you see), however it’s in the online “myClub” mode where PES has made the most additions. “Featured Players” is one addition that could change your teams literally on a week-by-week basis. Basically, players who performed well in real life during the weekend’s fixtures are then added to myClub with higher stats than the regular in-game versions of themselves. So in theory you could essentially have Harry Kane twice, but if he’s had a blinder for Spurs at the weekend you would include that “Featured Player” version in your online squads as his stats would be better, giving you that in-form Harry Kane. 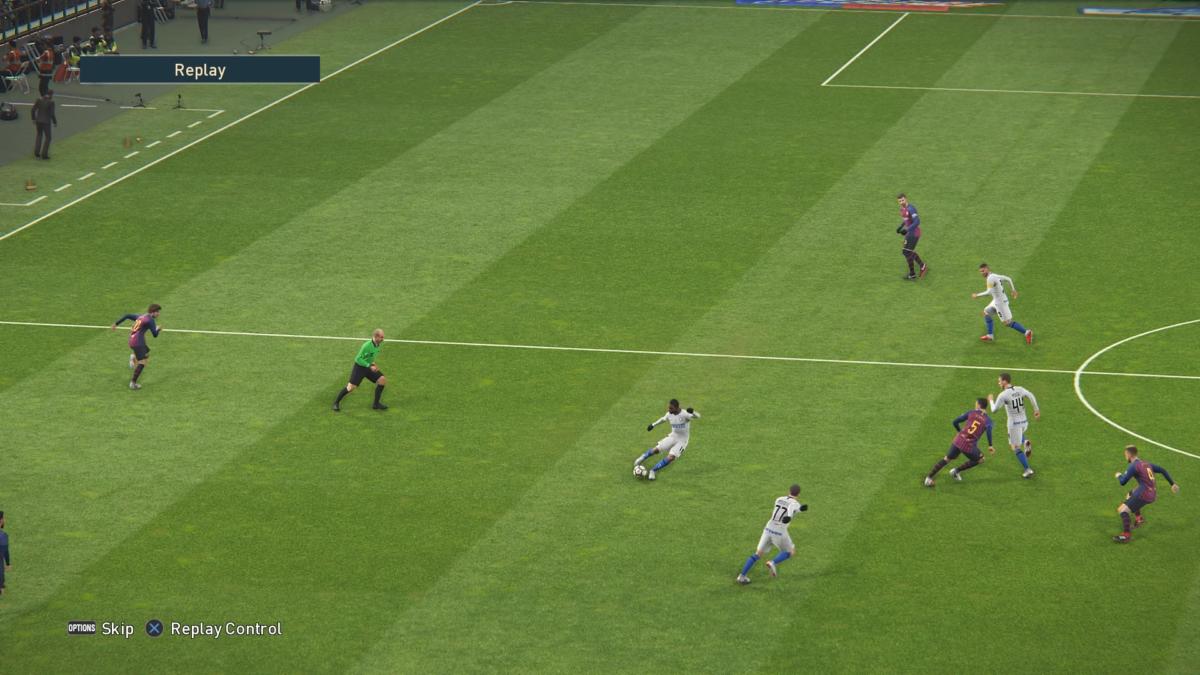 Other new additions to myClub include being to get two new trainers, skill trainer and position trainer in your bac room staff. They’re pretty much self-explanatory in that a skill trainer can help your players learn a new skill depending on the position they play, and a position trainer can improve a player’s suitability for a position they’re not yet great in. As well as these additions with your online play, there’s also added “acclaim” for how well you do in online matches as well as weekly leagues.

Online is where the bulk of the new tweaks and additions have been made, which is definitely a solid, understandable approach, but there are other areas where you feel Konami could have spruced up first and foremost. And it’s the same problems again, it’s the licenses (or lack thereof) and the overall presentation. 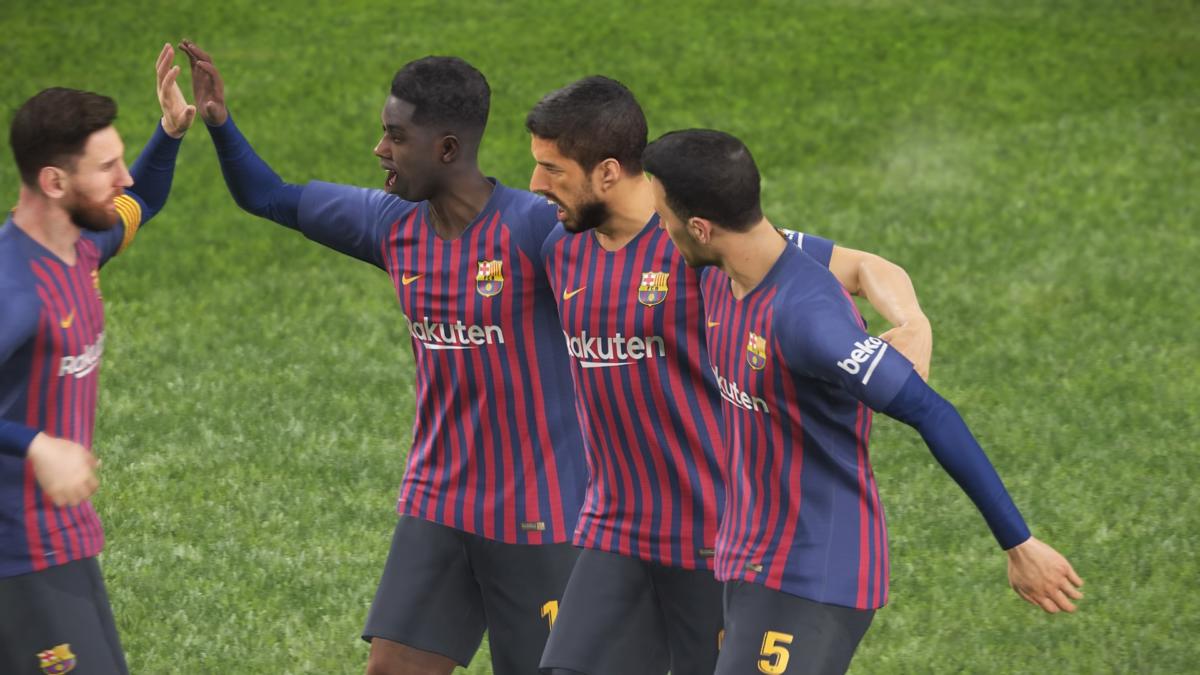 There’s the usual sounding hilarity of Man Red v Merseyside Blue, but this is the first PES in a decade to not feature the Champions League and Europa League licenses, losing them to FIFA once again. Most people could stomach the lack of licensed English teams (only Arsenal and Liverpool are legitimate this year) because hearing that Champions League theme can mask a multitude of sins. Going without it this year is going to be tough for most players. You can always use the numerous fan-made online option files to get the look of the game right once the game has been out a week or two, and while fine for seasoned PES pros, casual fans will be put off with the sheer amount of effort to get the right look which FIFA can offer from the get-go.

The UI is also pretty bog standard again this year. Menus, fonts and the like have barely been updated from previous games. And while the soundtrack is quite good this year, it doesn’t matter when navigating the game’s modes looks particularly uninspired. Add all this with the standard PES commentary nonsense (although no cries of players defending with “flesh and bone” this year) and you have got a package that has gone forward on the pitch, but sideways elsewhere. 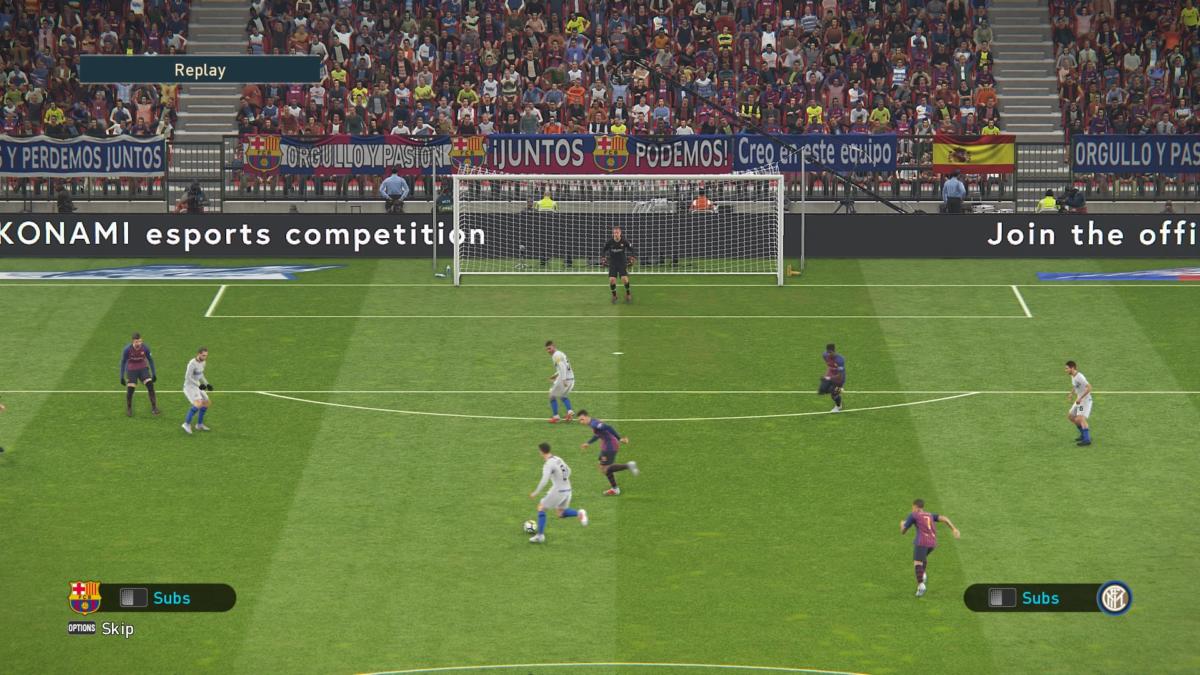 However, with that being said, PES 2019 is still worth your money because it is, for me, the closest you’ll get to playing football without heading to the local park. It’s fluid, feels great to play and is rewarding with practice and patience, which like anything in life, is how you should get better at anything. It’s just whether newbies will be put off by the lack of sheen from the outset.

PES 2019 is the best in terms of pure football realism the series has been since its PS2 heyday. Tactical nous and patience are rewarded while online play has grown and stepped forward brilliantly. However, the age old lack of licenses, but especially losing the Champions League, could seriously hamper PES’ chances of winning over new fans. But that shouldn’t put you off buying it. A fan-made option file makes it almost perfect.

Verdict
PES 2019 is a great addition to the series that should keep veterans happy and enthral new players alike. While not moving forward in areas where it should, it does advance in others to great effect. Microtransactions: you can spend real money within MyClub.
8
Cultured Vultures is a pop culture website established in 2013 covering all things gaming, movies, and more. We eat your words.
All The News On The Biggest Games