Not For Broadcast Is Papers, Please Meets Monty Python

"We could be looking at one of the best FMV titles in a long while."

I haven’t had the smoothest of rides since taking my new job. Well, really, it was foisted upon me by someone who wanted an escape, which should have been a big warning sign. So far, I’ve disgraced a national icon, maybe accidentally showcased fascists in a positive light, and also watched on as a gimp clambered out of a cupboard. Good Morning Britain has nothing on me.

This is Not For Broadcast, an FMV meets simulation game set in the 80s in which you control the broadcast for a news show, due out in Early Access on Steam on January 30th. With only three out of ten episodes currently available, the game’s promise is easy to see, so much so that I can’t wait for the next slice of farcical madness to be released. I wouldn’t be surprised if Chris Morris was a ghostwriter for this one.

Things start off very simply: a pretentious actor is coming on the show for an interview, and you must just switch between cameras to keep the audience invested, visible as a bar at the top of the screen. The basics are that you shouldn’t linger on one shot for too long and that whoever’s speaking should be the focus of the broadcast with a keen eye getting bonus points for swapping to reaction shots. You are given two screens with the first happening live and the second, the broadcast itself, on a delay, which helps you to catch swear words to censor before they go out. The interview went fairly smoothly for me, though the actor treated himself to a little temper tantrum as we went to an ad break. I hope I can destroy him.

You can pick up to three ads to queue for a broadcast with each ad usually a funny sketch as your presenters quibble amongst themselves in the interim. Early on, you can choose to play an ad for a new, possibly dangerous toy that turns into a news story soon after. Whether or not you choose to run the ad or not will have an effect on how the story plays out. In fact, there’s a lot of little ethical decisions to make in Not For Broadcast, you basically being able to shape the news as you see fit.

At the start of a show, you get to go through a bunch of headlines with two images usually showing the stories in a positive or negative light. A shady partnership called Advance are the new government and will pop up often — how you present them will impact how they are received by your audience, though I couldn’t really tell how deep this potentially goes with just three episodes available during the Early Access build. I did manage to turn a sports star into a alcoholic in need of rehab, so I’ve definitely been busy.

There’s a surprising amount of depth to a broadcast beyond the simple act of cutting between screens. To avoid signal interference, you must use your mouse wheel to navigate a little obstacle course down in the bottom right of the screen or your rating will suffer. I’m a little mixed on this mechanic: while it does keep you on your toes, it’s a bit of a distraction from the enjoyable chaos that’s really just a nuisance. A later level will also introduce a power surge, meaning that you can only take a finite amount of damage while pressing buttons before dying. It’s good that NotGames have embraced the variety, though I was surprised that they would throw such a major spanner in the works so early when you’re still getting used to the ins and outs. 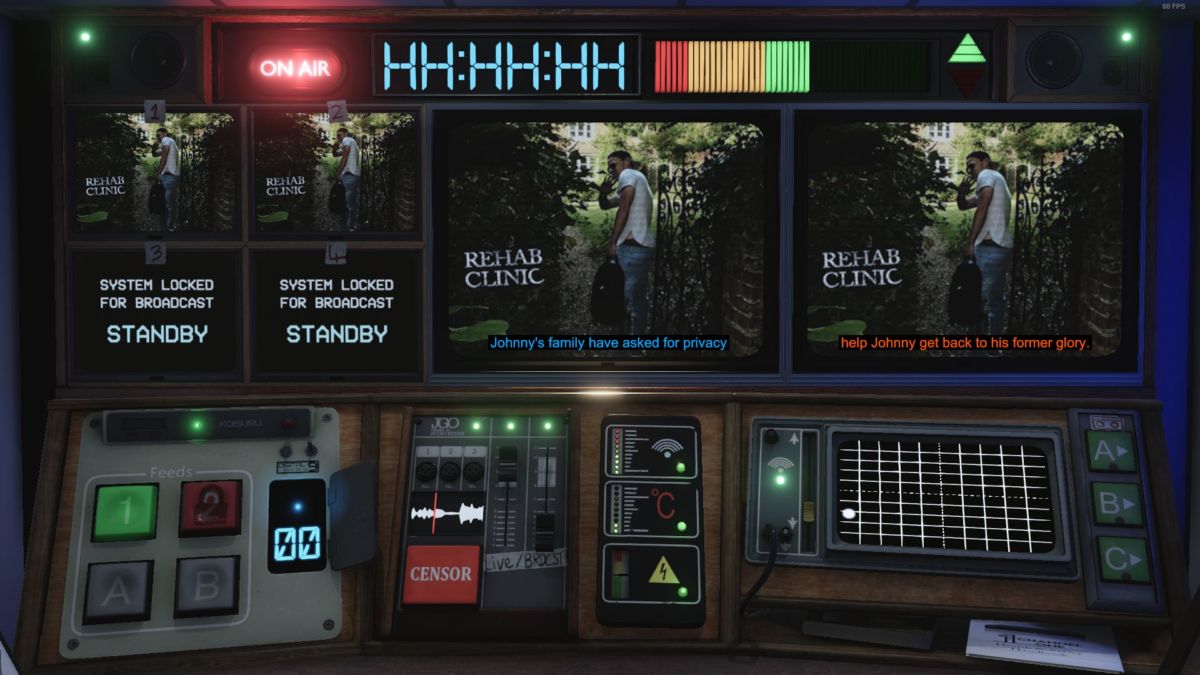 In terms of tone, Not For Broadcast doesn’t take itself or anything too seriously, bordering on the slapstick often. From a fake sport involving a bin and streakers to toffs struggling to adapt to their wealth being taken (and then getting naked), it’s an irreverent time that doesn’t mind ripping the piss out of everybody. Whichever side of the fence you find yourself on, Not For Broadcast will likely elicit a chuckle regardless thanks to how much its developers appreciate that we’ll all be dead soon anyway.

At the end of each broadcast, you are assigned a rating, which will affect the currency you have to spend on upgrade and trinkets. There’s not much you can really do in the Early Access build with your upgrades as they are introduced right at the end, though this will likely become more important the more episodes are added. After each broadcast, you can also look back on your work in full, though I’d hope the ability to fast forward and rewind to specific sections is added at some point — unless I am being dim and just totally missing the function.

Not For Broadcast does also get rather serious at points, typically in the interludes between broadcasts when you have to make choices regarding your family. Worried that Advance are taking the country in the wrong direction, a family member asks to borrow your passport to flee. Whether you choose to or not will later change the mood at Christmas dinner and your relationship with your wife — it’ll be fascinating to see how this illegal act will affect you down the line when the authorities catch up with you.

Not For Broadcast is a barmy time with much more to come in the future, though there’s a tonne of replayability with different paths to take each time and a scoring system to master. If NotGames keep up the game’s early promise, we could be looking at one of the best FMV titles in a long while.