Home
Gaming
Will We Ever See TimeSplitters 4?
Gaming
·9 min read

Will We Ever See TimeSplitters 4?

It's time to split!

Gamers who were around in the early to mid-2000s will likely have a lot of fond memories when it comes to the TimeSplitters series, whether that’s from inviting your mates around to play the four-player split screen multiplayer, or just from experiencing the weird and wonderful campaign and challenge missions the series had to offer. That, or you’ll know it as the game that Ed loves playing in Shaun of the Dead.

Quickly becoming one of the most successful and celebrated FPS franchises of the 2000s, TimeSplitters seemed to disappear as quickly as it arrived, dropping a trilogy of absolute bangers before disappearing into the night. Fans have been hoping to see the series return in some form or fashion over the past decade and a half, but an official release is still nowhere to be found. Let’s ask the question: when will it be time to split again, and will we ever see TimeSplitters 4?

The History of TimeSplitters

Their first game, TimeSplitters, was developed in the space of 18 months, with a studio comprising 18 employees. Launching in October 2000 in time for the release of the PS2, TimeSplitters quickly became a household sensation with its enjoyable, if a little disposable, single-player campaign and focus on multiplayer that had been refined by the team’s experience working on both GoldenEye and Perfect Dark. There was even a Mapmaker that let players recreate their favourite multiplayer maps from other games too. A knock-off version of Facility is still just as good as the regular version, right?

TimeSplitters sold over one million copies, which Eidos were certainly pleased with, but Free Radical felt like they could do better, as GoldenEye sold a lot more. They swore that the sequel, TimeSplitters 2, would be world-beating, and they certainly weren’t wrong. Development began the day after the first game went gold, with Free Radical given twice the development time and employees to turn around a successful follow-up.

TimeSplitters 2 launched in October 2002 for the PS2, Xbox and GameCube, and introduced a heavier focus on the single-player campaign, which was widely criticised in the first game. The multiplayer and arcade challenges were also bolstered, making the sequel a more complete game as a whole. This reflected in both critical and commercial success, with the game receiving glowing reviews from critics across the board and reaching two million sales. It was also featured in Shaun of the Dead, which, you know, is something I guess.

Before development started on TS3, which would come to be known as Future Perfect, Free Radical devoted some time to developing Second Sight, an idea the team had since Free Radical started. However, the concept of someone with psionic powers killing dudes happened to coincide with the game Psi-Ops: The Mindgate Conspiracy, which had a bigger budget and more marketing behind it, meaning Second Sight felt lost in the shuffle. It’s a bit of a cult hit now though.

After a two game partnership with Eidos, Electronic Arts partnered with Free Radical for TimeSplitters: Future Perfect, with the belief that EA would deliver proper marketing and sales for the TimeSplitters series. Unfortunately for Free Radical, EA had also commissioned a development team to work on GoldenEye: Rogue Agent, which proved to be a bit of a flop, maybe due to the fact you play as the bad guy who happened to have a Golden Eye. It’s a bit of a shameless cash grab on the GoldenEye license, if nothing else, but either way, Free Radical believed it negatively affected Future Perfect.

When speaking to Eurogamer in 2012, Steve Eliis had this to say:

“We had quite a frank conversation with EA, where they told us they weren’t going to bother trying to market [Future Perfect] very much. Because at the time they had their GoldenEye game [GoldenEye: Rogue Agent], and they said that for every dollar they spent on marketing that game they would get more dollars back. It didn’t match up with their original promises.”

“Throughout the development of Future Perfect we had EA people all the time coming to us saying ‘yeah your game’s alright, but not as good as this GoldenEye we’re making.’ Continuously! ‘Yeah I saw GoldenEye, it’s awesome, you Brits had better raise your game!’ And we asked to see it. ‘No, no, you can’t see it’.

“We killed ourselves getting Future Perfect done, only to find that they had made a total balls of GoldenEye to the extent they had to throw more money at it to market it, the money that they might have spent on Future Perfect. I mean, it’s like fiction that it’s a GoldenEye game, isn’t it? I don’t think the irony of what they were doing ever occurred to EA.”

TimeSplitters: Future Perfect would go on to launch in March 2005 for PS2, Xbox and GameCube, and while it still managed to earn quite a lot of glowing reviews, the reception just never matched up to the success of TimeSplitters 2, which many still regard as the pinnacle of the series. Personally, I love Future Perfect, but largely because it was my introduction to the franchise as a whole.

What Happened To Free Radical?

After the release of Future Perfect, Free Radical ran into difficulties trying to exist in a gaming industry that seemed to trend more towards brown and grey military shooters. In that same interview with Eurogamer, Doak remarked: “People were telling us, ‘We don’t like your cartoony styles, they don’t sell. Can you do something more serious for a shooter, something more military?’ They wanted us to pitch stuff to them, but they were directing us down these narrow paths saying, ‘Pitch us something a bit like this’. And what we should have said was ‘fuck off, no. I’d rather go out and get run over by a car!'”

Free Radical did manage to find a partnership though, working with Ubisoft on the development of Haze, but that game would end up being a huge pain in the neck for Free Radical, in no small part due to Ubisoft. Ubisoft would shoot down the creative vision of Haze, with Doak remembering “we wanted to do this thing about the horrors of war, and Ubisoft were saying, ‘Yeah go for it, something really horrific – but it’s got to get a 15 rating.’”

The age rating was the least of Haze’s issues however, as Free Radical wanted to continue creating new technology to aid the development of the game, but that would come back to bite the team in the ass. Steve Eliis notes: “We made the decision to continue developing our own technology. Because that had worked well in the past, and we had a new generation of programmers who wanted to do away with our previous engine, which was C-based, and replace it with a C++ one. It sounded like a good idea. It sounded like we were going to solve a bunch of problems we might run into as things scale up. It didn’t, and that was the start of our problems.”

Couple all that with the fact that Haze was announced to be a PS3 exclusive by Ubisoft, with the PC and Xbox 360 versions cancelled, despite the fact that, at the time, the game wouldn’t even run on the console, and you’ve got a recipe for disaster. Haze released in 2008 to a reception that can only be described as middling at best, and would be one of a few factors that led to the team at Free Radical eventually going into administration. Deals with LucasArts to develop Battlefront 3 and Activision to create a new GoldenEye ultimately fell through, which also played a huge role in Free Radical’s descent.

TimeSplitters 4 was in the early stages of development when Free Radical went into administration, with a playable demo being shown to publishers in 2008. Unfortunately, publishers were reluctant to invest in the idea of TimeSplitters 4. In an interview with GamesTM, Crytek UK Managing Director Karl Hilton had the following to say:

“Firstly, they would ask what happened with Haze. We were the company that made a series of high-rated shooters and then we had released Haze, which wasn’t as well received. This worried them. Secondly, their marketing person would say something along the lines of, ‘I don’t know how to sell this.’ The unanimous opinion among all publishers that we pitched TimeSplitters 4 to is that you can’t market a game that is based around a diverse set of characters and environments – you need a clear and easily communicated marketing message, and TimeSplitters doesn’t have one.”

As for TimeSplitters 2 HD, Steve Ellis explained in an interview with NES (which has since been shut down but the quote has been archived by Eurogamer) that the game was in development, but he’s unsure what happened to it: “We had an ‘HD’ downloadable version of TimeSplitters 2 in development at Free Radical in 2008. I don’t know what happened to that but yes, I’d love to see it released at some point. Maybe it could be the catalyst that is required in order to raise enough interest in TimeSplitters 4 that a publisher might want to fund it.”

Will We Ever See A New TimeSplitters? 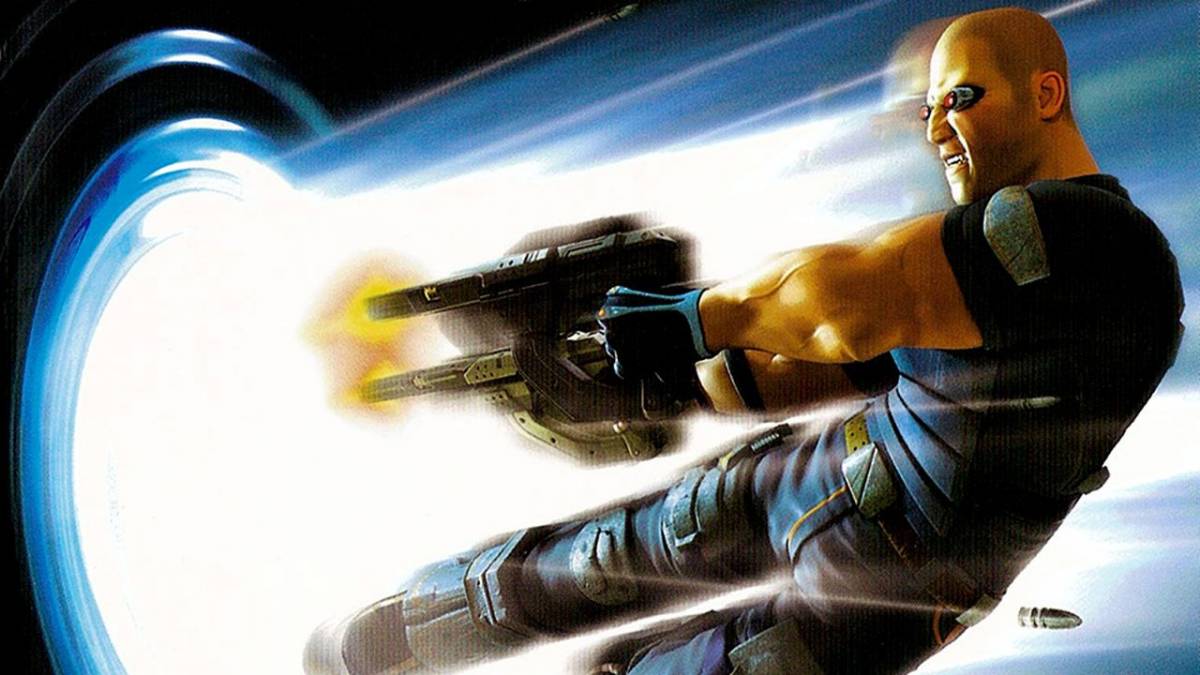 Yes, more than likely in fact. Koch Media, a THQ Nordic AB subsidiary, announced in 2018 that they’d acquired the TimeSplitters license. A year later, they revealed that Steve Eliis had joined the company with a view to shepherding the franchise into the next-generation. When speaking to Video Games Chronicle, Eliis said: “Personally, I always saw TimeSplitters as ‘unfinished business’. It was a series that was ahead of its time, from the days when shooters were all brown and games weren’t online. It feels like its time has now come, so the opportunity to work on it was hard to ignore.”

THQ Nordic themselves have become somewhat known as the gatekeepers of nostalgia in the gaming industry, taking beloved franchises and bringing them back from the dead. We’ve seen the likes of Darksiders 1 & 2 brought to modern consoles, before the release of Darksiders 3 and Darksiders: Genesis. The conglomerate and its various subsidiaries also revived Destroy All Humans, are actively working on a new Saints Row, released Kingdoms of Amalur: Re-Reckoning and more. Clearly, they have plans to do the same to TimeSplitters.

Of course, if THQ Nordic don’t get it finished, the fans will beat them to it. Various fan projects have been kicking around, though perhaps the most notable is TimeSplitters Rewind, which formed off the back of the 100,000 Strong For TimeSplitters 4 Facebook group. Crytek UK even gave their blessing for fans to create their own remake in 2012, so long as they didn’t use any existing assets, which has meant the project has been stuck in development since then.

It’s not clear yet what form a new TimeSplitters will take, whether it’ll return in the form of some kind remake or HD port, or if THQ Nordic will just head straight to TimeSplitters 4. Still, if THQ Nordic can get out of bed for a SpongeBob SquarePants: Battle For Bikini Bottom remake, then let’s see a TimeSplitters remake, please.

READ MORE: Will Respawn Ever Make Titanfall 3 A Reality?