Spongebob SquarePants: Battle for Bikini Bottom - Rehydrated offers enough variety to still be as F.U.N as it was in 2003. 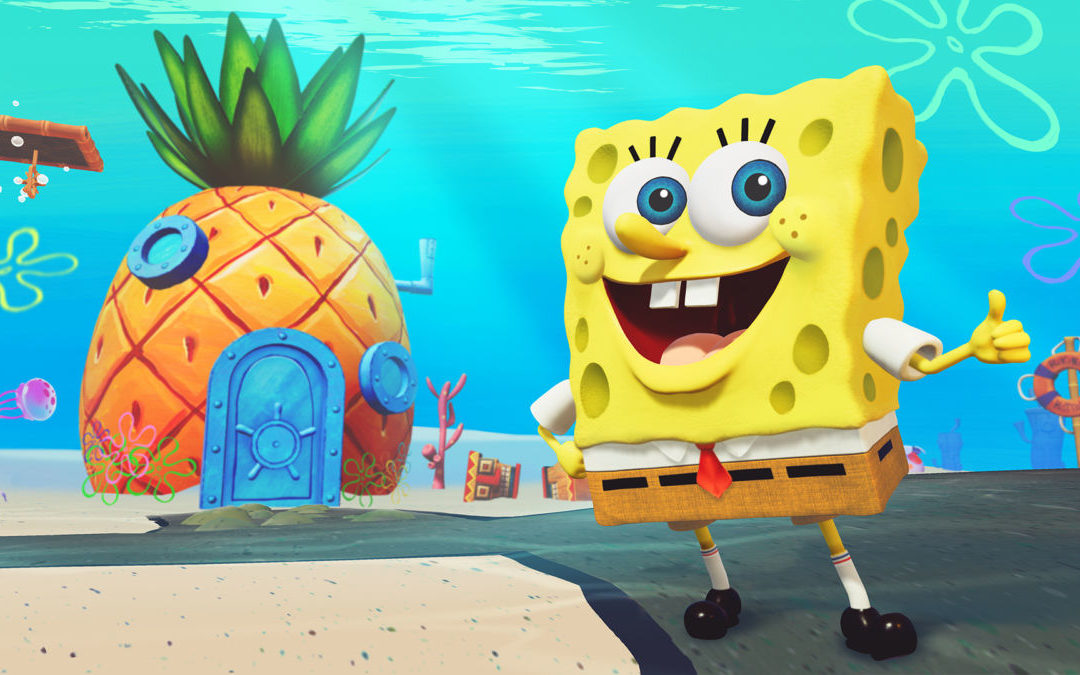 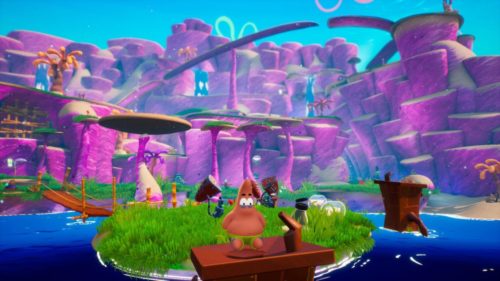 For just over 20 years, Spongebob Squarepants has been TV’s most energetic and happy-go-lucky sea sponge, with a career spanning films, a Broadway musical and even theme park rides. In that time, the fifth-longest-running American animated series has won a multitude of awards and generated well over $1 billion in revenue for Nickelodeon. Back in 2003, the franchise would see the launch of the 8th Spongebob-centric game, Battle for Bikini Bottom, which would go on to be considered something of a cult classic, as well as one of the best in the series history.

The story of Rehydrated remains exactly the same, with regular series antagonist, Plankton, scheming to once again steal the Krabby Patty secret formula. Building the aptly named ‘Duplicatotron 3000’, Plankton creates an army of robots but forgets to turn the ‘obey me’ setting on, leading the robots to kick him out of the Chum Bucket and run rampant across Bikini Bottom. Just another day at the office, then.

Spongebob, while playing with Patrick at the same time, just so happens to wish robots were real and is soon wrapped up in Plankton’s ploy to regain control of the Chum Bucket by setting the gullible sponge off on an adventure across Bikini Bottom to reclaim Golden Spatulas.

The story isn’t really any more complicated than that and, for better or worse, neither is the gameplay. Across a number of iconic locations in Bikini Bottom, it’s a simple case of getting yourself from point A to point B, jumping and attacking robots and other such enemies along the way. The geography of Bikini Bottom is as colourful as it is in the cartoon and, while fairly linear, it’s still a treat to navigate through the eye-catching and vibrant underwater world.

You take control of Spongebob, as well as Patrick Star and Sandy Cheeks, who all control pretty similarly while having their own quirks to help make them feel unique to play as. Spongebob attacks with his spatula and can sneak around, while Patrick can belly-flop enemies to stun them and Sandy can use her lasso to reach enemies further away and glide across long distances. There are also some environmental advantages to each character, such as Sandy being able to lasso between Texas-shaped grapple hook points and Patrick throwing watermelons to either attack or stack to reach higher ledges (although it did often feel a little clunky trying to jump on top of these).

Credit to the animation, also, for capturing the nuances of how the three move – Spongebob prances, Patrick lumbers about and Sandy moves like a squirrel in an underwater suit ready to karate chop through anything she sees. Not to mention the character’s idle animations, which admittedly did get a laugh out of me on more than one occasion.

You can swap between the three at bus stops which are scattered across the levels but I did find myself having to keep note of where character-specific puzzles were, as the only common indication was a hint sign I would read beforehand. Fortunately, it’s easy to figure out which character is needed for what task, though.

While each level is more or less an elongated fetch quest with platforming, there felt like just enough variety throughout them all to keep things fresh and entertaining, including random mini-games, like turning Spongebob into a spongeball (SquarePants) to pass through smaller gaps and having him bungee jump from a fishing hook. It is the quirky side pieces like this that are sure to keep you smiling during your time in Bikini Bottom.

Across the world, you will also collect aptly named Shiny Things, Rehydrated’s form of currency. Thankfully, though, these are not in short supply and are very easy to amass hundreds in a single area as every enemy defeated and tiki box broken will reward you with plenty. Not to mention that the enemies and boxes will respawn should you die and return to an area, so you can farm a whole bunch. Shiny Things can be exchanged to unlock certain areas of a level or with characters for a Golden Spatula, so it’s always worth exploring to grab them where you can, especially when seeking Patrick’s lost socks. The socks are the only collectable which require you to search vigorously for, as these too can be exchanged for Golden Spatulas.

You’ll invariably encounter a number of familiar faces throughout Battle for Bikini Bottom, like Squidward, Mrs. Puff and Bubble Buddy, who will set you the task for that area, such as retrieving King Jellyfish Jelly, replacing an antenna or finding missing steering wheels. The cast is also brought to life thanks to the stellar voice acting which holds up after 17 years. It was great to hear so many familiar voices I had spent many, many hours of my childhood with.

The one exception to this, however, is Mr Krabs. Original voice actor Clancy Brown’s replacement, Joe Whyte, takes over and, frankly, his Mr. Krabs impersonation is bad. Like, really bad and not even in the “so bad, it’s good sense”, making it one of the few things to really throw me out of the experience. It was a massive shame THQ Nordic couldn’t get Clancy to re-dub Mr. Jeans for this remaster.

The only new dialogue recorded was for content added into Rehydrated that had been previously cut in the 2003 original, including a robo-Squidward and new boss battle phases.
The remastered soundtrack is also a delight and, although it does soon become repetitive, I’d be lying if the first few rotations weren’t a joy to listen to.

Despite the platforming and voice acting still being solid and the graphics having a welcomed upgrade, the one major downside of Battle for Bikini Bottom remains: it just isn’t that challenging.

It isn’t hard to figure out how to overcome any given puzzle or obstacles, only ever requiring a few seconds of thought. You are never penalised for dying, just sent back to the last checkpoint and, thanks to teleport boxes, you can go back to your previous position quickly enough. The only major frustration I found was the speed in which certain ‘hammer’ robots were respawned by machines when trying to solve a puzzle, as they tend to attack quicker than you can perform an action. In one instance, I was killed a few times while playing as Patrick, as these robotic annoyances kept smacking me about faster than his ability to throw a watermelon at a switch would allow, which did feel cheap.

Spongebob SquarePants: Battle for Bikini Bottom – Rehydrated still feels as much of an organic extension of the Spongebob universe now as it did close to 20 years ago. It is undoubtedly still the best Spongebob game out there and the love for the show remains apparent in every pore of its being. While it isn’t the most challenging platformer in the world and is clearly aimed at a younger, Spongebob-centric audience, it presents enough variety for fun to be found for an audience both old and new. The 4K graphics upheaval gives Rehydrated a fresh lick of paint and the voice acting helps make you feel like you’re involved in an interactive episode, Imposter Krabs’ unforgivable voice aside.

A PS4 key was provided by Sony for the purposes of this review. 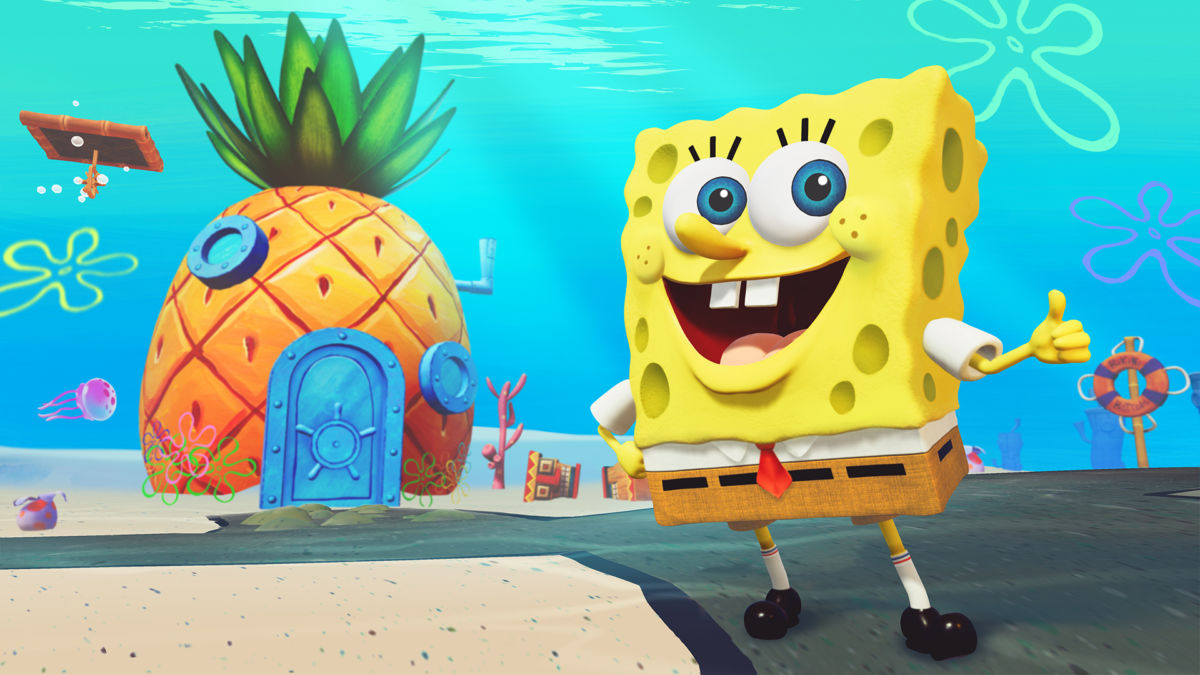 Verdict
Spongebob SquarePants: Battle for Bikini Bottom - Rehydrated isn’t the most complex or challenging platformer in existence but offers enough variety to still be as F.U.N as it was in 2003.
7.5