Will We Ever See A New Sly Cooper Game?

Someone pilfer Sly from Sony's vaults. 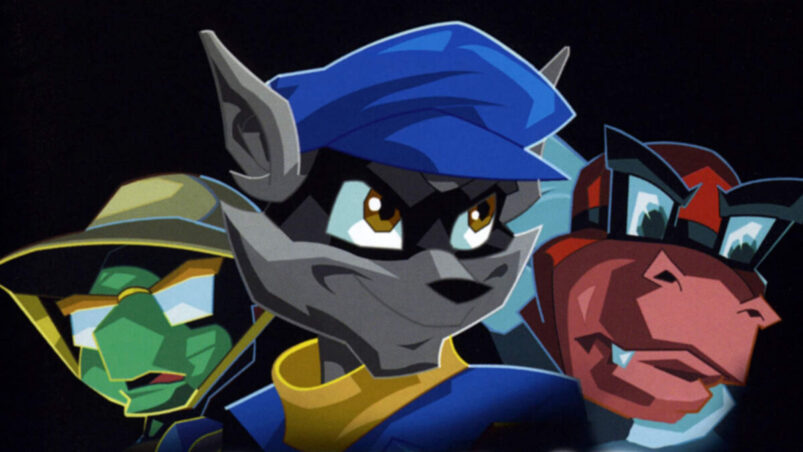 For a period of time, the PlayStation wasn’t struggling for colourful mascots that could help sell the vibrancy and variety of games on Sony’s consoles. Instead of the more realistic protagonists that have come to define PlayStation’s current catalogue, PlayStation used to be filled with the likes of Crash Bandicoot, Ratchet & Clank, Jak & Daxter, Spyro and the subject of today’s article, Sly Cooper.

An action-adventure/platformer from Sucker Punch, Sly Cooper captured the hearts of gamers with its initial trilogy on the PS2, along with a fourth installment later on. However, the series has been dormant for the past eight years, with no real signs of a comeback. Will there ever be a new Sly Cooper game? We’d love to know.

The History of Sly Cooper

The first game in the series, Sly Cooper and the Thievius Raccoonus, which was known as Sly Raccoon in Europe, launched on PS2 in 2002 and was developed by Sucker Punch. Sly Cooper was the second game from the developers, following on from the release of Rocket: Robot on Wheels for the N64 a few years earlier. While Rocket was pretty well received, Sly Cooper was even more of a success.

Sly Cooper turned heads when it was initially revealed due to its cartoonish art style, which was referred to as “Toon-Shading” by Sucker Punch’s Brian Fleming in an interview with Official PlayStation Magazine. The reason it’s not called cel-shading, according to Brian, is because they wanted to create “painterly backgrounds” with highlighted characters in the foreground like an animated movie: “Typical ‘cel-shaded’ games will use a consistent look for foregrounds and backgrounds, which we really like, but it’s just different than the approach we took.”

The development team also noted that they went through a number of iterations to create the game’s characters, particularly the main character of Sly Cooper. According to the dev team in an interview with The Armchair Empire, Sly looked a lot different from his iconic appearance early on: “Sly went through many incarnations. He was originally more like a real raccoon; somewhat pudgy. He went through six or eight major revisions before we settled on the lithe and agile raccoon you see today.”

While Sly Cooper and the Thievius Raccoonus reviewed well at launch, earning a fantastic 86 average on Metacritic, it didn’t quite do so well commercially. Sly Cooper launched around the same time as the first Ratchet & Clank, along with Jak and Daxter: The Precursor’s Legacy. Both of those games became huge mascots for the PlayStation 2, meaning Sly Cooper was left to pick up the scraps. However, the game still managed to shift at least 400k copies in the first year as it was added to the PS2’s Greatest Hits library, earning a reprint in 2003 with a lower price point.

Due to the game’s modest success, Sucker Punch quickly got to work on a new game in the Sly Cooper series, Sly 2: Band of Thieves. Launched in 2004, the second game built on the formula introduced in the original game with more levels, more playable characters, skills to buy and ultimately more ways to interact with the levels. There was also the ability to plug an optional USB microphone into the PS2 as a way to distract enemies mid-level, or to refrain from making noise during stealth sections. It’s one of the many early to mid-2000s gaming gimmicks that did the rounds back then.

The improvements to the game’s length and overall amount of content would pay off critically, with Sly 2 earning an 88 average on Metacritic, and has been considered among one of the best PS2 games of all time. VGChartz lists Sly 2 as having sold 1.81 million copies worldwide, but a leaked presentation for Sly 4 puts the second game’s sales at 965,793 units. What is known is that Sly 2 was still overshadowed by Ratchet & Clank, as Sly 2 was nominated for GameSpot’s 2004 Best Platformer Award category, but lost out to Ratchet & Clank: Up Your Arsenal.

Sucker Punch would close out the trilogy in 2005 with Sly 3: Honor Among Thieves, which introduced more new characters and other gameplay features, and while the Metacritic average of 83 was a tad lower than the previous two games in the series, it was still regarded as a brilliant PS2 platformer. With three fantastic games under their belt, would Sucker Punch continue to ride the Sly Cooper train into the PS3 era? Nope.

So, What Happened To Sly Cooper?

Well, for lack of a better term, Sucker Punch just wanted to do something new. After developing three games in the Sly Cooper series, Sucker Punch began workshopping ideas for a brand new game franchise, eventually settling on the idea of Infamous. The open world superhero game, which immediately earned some comparisons to Prototype, would go on to be a big hit for Sony and the PS3, and Sucker Punch haven’t really looked back since.

That isn’t to say that Sly Cooper was forgotten about by any stretch of the imagination. Sanzaru Games, a fledgling development studio at the time, pitched a prototype for Sly Cooper 4 directly to Sony. At the time, Sanzaru had only worked on a Wii title called Ninja Reflex, but it was the PS2 port of Secret Agent Clank that was their foot in the door at Sony, which allowed them to successfully pitch their plans. Glen Egan, a lead producer at Sanzaru has stated that they pitched to develop Sly Cooper 4 because “I really want to play another Sly Cooper game.” You have to admire the passion, honestly.

Whether it was to gauge the popularity of the series or to ensure that Sanzaru’s developers were sufficiently skilled enough to live up to the legacy of previous Sly Cooper games, Sony tasked the developers with porting the original trilogy of games to the PS3 in the form of The Sly Collection, which bundled all three games together and upgraded them to run in high definition. The collection pretty much split the difference on the three games’ Metacritic score, earning an 85 in total, but crucially, the collection included a teaser trailer for Sly 4.

Despite being formally announced in 2011, it would take until February 2013 for Sly 4, titled Sly Cooper: Thieves In Time, to see the light of day. Thieves In Time was a direct continuation of the third game in the series, seeing the Cooper gang band together once again to try to stop a villain from causing issues in the timeline. While it’s the worst reviewed game in the series, sitting at a 75 on Metacritic, with reviews citing that the game plays it too safe and feels too much like a PS2 throwback at a time when games were evolving, it’s still a decently loved entry. Even Sucker Punch stated on Twitter around the game’s launch that they enjoyed it.

However, that’d be the last that players would see of Sly Cooper, which still annoys fans of the series to this day. Sly 4 ended with a cliffhanger of Sly stuck in the past, while his team were searching for a way to bring him back. Unfortunately, there’s been no resolution on that whatsoever, though according to Sanzaru lead developer Mat Kraemer when speaking on the Kinda Funny Games Daily Show, the cliff-hanger was set to be resolved in a DLC episode, but it was strangely cancelled by Sony:

“Egypt was going to be a DLC episode. That was always the intention, then we never got to finish that out. The team at Sanzaru, we have the story, the whole episode done on paper form, but we would love to come back to that world. I hate leaving him there. It’s the question we get the most.”

Kraemer would then encourage Sly Cooper fans to let Sony know if they’re interested in a new game in the series, saying: “All I can say is if you guys want more Sly Cooper let Sony know. We’re always ready to dig into that. It was a great franchise to work on and we really miss it.” For whatever reason, however, it’s been all quiet on the Sly Cooper front ever since, which either means nothing is happening or Sly’s sneaking in the shadows to steal something.

Will We Ever See A New Sly Cooper?

If there’s a new Sly Cooper on the cards, it’s hard to see it coming from any of the original developers. Sucker Punch has achieved brand new levels of success by pivoting away from Sly Cooper games and moving more towards open world experiences. The Infamous series allowed Sucker Punch to become much more of a household name, while the juggernaut that is Ghost of Tsushima appears to have become the studio’s main focus going forward, with a potential sequel on the horizon.

As for Sanzaru Games, their hands are tied with regards to making a new Sly Cooper game. Sanzaru had already pivoted more towards VR gaming over the past few years, releasing Asgard’s Wrath as a Oculus Rift exclusive back in 2019. One year later, the development team was purchased by Facebook/Oculus to become part of the VR company’s growing fleet of studios. With Sanzaru tied up with specifically not PSVR games, they won’t be returning to Sly Cooper for a long time, if ever.

The rights to Sly Cooper lie with Sony, ultimately, so it’s up to them more than anything if they want to do anything with it. At the moment, the conception is that Sony are enjoying plenty of first-party success offering bombastic, third person, narrative focused action adventure games, the likes of which include Horizon, The Last of Us, Uncharted, Spider-Man and more. However, the publisher has been diversifying recently by offering more in the way of 3D platformers. Ratchet & Clank: Rift Apart is the most recent example on PS5, where Sly made a cameo alongside Jak & Daxter, but there’s also Astro’s Playroom and Sackboy.

Sony have also called upon developers in the past to remake their past games on new hardware, with Bluepoint responsible for the incredibly well received Shadow of the Colossus and Demon’s Souls remakes for PS4 and PS5. While the “toon-shading” style of Sly Cooper might be outside Bluepoint’s traditional graphical style, favouring stunningly realistic graphics instead, it could be a chance for the team to challenge themselves with something new.

Regardless of if Sony decides to do something with the franchise, there’s a clear groundswell of support from both regular gamers and the press themselves to see the franchise return. While the odds are highly unlikely that any of the original developers will be making a potential new game, the industry’s recent wave of stellar remakes might prove to be too much for Sony to ignore. Maybe we’ll see the Raccoon back plundering his little heart out sometime soon.

Until then, you can play the old ones through PS Now.

READ MORE: Will We Ever See A New Dead Rising Game?