10 New Comics of September 2022 You Should Read 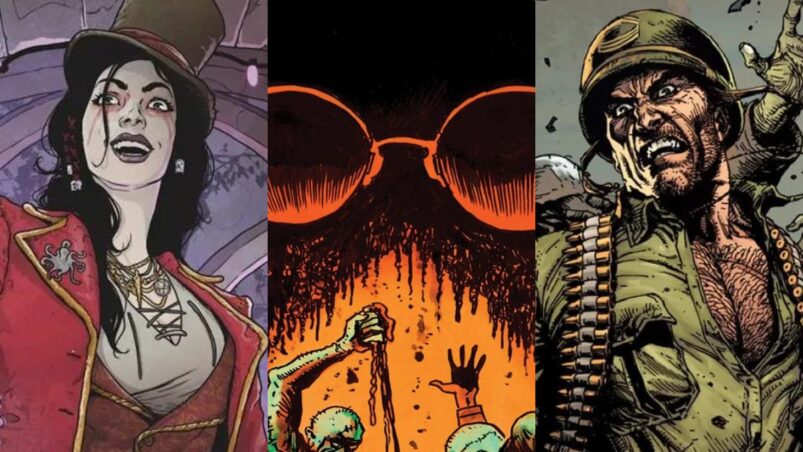 September may as well count as part of October as far as capturing the spirit of spooky season goes. Halloween and fall seasonal merchandise even began appearing on the shelves in August. Add to the profuse amount of horror comics released at any given time these days, but especially in the next couple of months, horror-lovers can celebrate year-round.

Though not every comic on this list is a horror title, you may as well insert (horror) into the title. There are a few sci-fi, music, and superhero genre entries here, but horror comics comprise over half of this list. Whether you’re a fan of creepy comics or not, here are 10 new comics of September 2022 you should check out — if you dare.

The Archie Horror Comics imprint from the classic Archie Comics publisher launches a new spooky initiative this fall. Several creepy titles are on the horizon, beginning with the September comic release of Chilling Adventures Presents…Weirder Mysteries #1.

The one-shot anthology title centres on paranormal happenings in the town of Riverdale. Betty Cooper from the Jughead: The Hunger comic series headlines her own story in a UFO tale. Other shorts include appearances from rarer comic characters within the Archie universe, such as Alexandra Cabot from Josie and the Pussycats. Coming out in late September, this comic will help kick off the Halloween season with some delightful tales of terror.

Spooky season is definitely on the horizon, as plenty of horror comics start appearing on the stands this month. Horror-writer master Cullen Bunn unites with a talented group of creators for the first issue in Shock Shop.

The horror anthology flip comic published by Dark Horse Comics is set in a haunted comic book shop of horrors. Two frightening tales take place in Shock Shop. One follows a man who rents a house seeming to prey on his angry emotions. In the second story, a disgruntled husband and wife find themselves stalked by something in the woods during a camping trip.

Each short features a different artistic team in true anthology fashion. From the art previews and solicit information available, Shock Shop #1 appears like it will live up to its promise to shock.

An upcoming debut issue from AfterShock Comics wraps several genres into one with Last Line #1.

In the September comic release, tube driver Sally Hazzard watches in horror as someone pushes a man to his death in front of her train. After the incident, Sally realizes she’s the only one who saw a figure physically shoving the man instead of CCTV footage and other witnesses showing the man falling all by himself. Distressed, Sally teams up with MI6 agent Edward Tarn to further investigate the accident.

Although I’m not certain if this first issue will get into it, the solicit mentions an alien invasion and an interplanetary travel system underneath London. There’s always room for an X-Files-type comic about an unexplained assassination and a potential alien invasion on a list of enticing new comic releases.

One of the few non-horror comics on the list, the superhero comic Crashing debuts the first installment of its 5-issue miniseries in September.

Specialist Rose Osler works at a hospital treating only Patients with Powers in the first issue of IDW Comics. Any patients without powers are strictly prohibited from entering the hospital. But when Boston’s greatest protectors and destroyers plunge the city into chaos, Rose begins treating the city’s most beloved hero in the daytime…and its greatest villain under the cover of darkness.

The colors, compositions, and lettering craft on the preview pages will catch your eye immediately. Crashing #1 appears and sounds like a special comic about vulnerability, morality, and duty in a unique hospital setting.

British comic magazine 2000 AD was first launched back in 1977 with a focus on groundbreaking science-fiction comic tales. Popular character Judge Dredd made his first appearance in the second issue of 2000 AD. Since then, he has become the longest-running character in the magazine. Such a storied history means readers new to 2000 AD may not know where to start reading.

Look no further than the Best of 2000 AD anthology graphic novel series. The first of the quarterly six-volume series releases in September. In this first volume, audiences can read seminal vintage comics about Judge Dredd, Judge Cassandra Anderson, Halo Jones, and more. Best of 2000 AD collections also include a foreword essay on one of the comics by a pop culture writer.

Having already read Best of 2000 AD Vol. 1 as someone who knew nothing about the magazine beforehand, this beautiful collection is guaranteed to draw in a new 2000 AD fanbase.

In this neon-soaked jungle of misanthropes and vampire billionaires, First Born vampire Atticus Sloane is disillusioned with his aristocratic cabal. Instead, he opts to turn anyone who will pay him well into a vamp with a swift bite. But the elite secret society of vampires isn’t happy with their rogue criminal member.

Blood-Stained Teeth pulses with psychedelic art and a fast-paced narrative. It’s a comic where you can’t wait to open it up and first take in the vibrant display of colors exploding on the interiors. And you get a satiric vampire story on top of the decadent illustrations. Bite Me serves you issues #1-5 of the neo-noir vampire saga from Image Comics on a silver platter.

Legendary Goosebumps and Fear Street author R.L. Stine has teamed up with comic greats in his first comic-writing venture, Stuff of Nightmares.

The premiere issue of the four-issue limited comic series from BOOM! Studios reimagines iconic monsters. Stuff of Nightmares #1 centres on two demented brothers who want to create life in a twist on the classic Frankenstein tale. However, what they conjure is something unspeakable.

We can only imagine what new nightmares will torment us as a product of reading the words of R.L. Stine, brought to life with hauntingly ghoulish and gruesome sequential art.

Highball #1 is touted as Guardians of the Galaxy meets The Hitchhiker’s Guide to the Galaxy. Highball pilots spaceships for a living and has a level of fame as the best shot in the entire galaxy. However, there’s a major caveat to his expert marksmanship: He has to be completely drunk to hit his target. The first issue follows Highball as he comes head to head with an intriguing bird warrior, among other unusual foes.

Stuart Moore also wrote Captain Ginger for AHOY Comics about cats in space, so I am delighted to see him returning to the stars for this new outrageous space adventure series. Paired with Fred Harper’s energetic and expressive illustrations and the talented Lee Loughridge and Rob Steen, Highball seems high on fun.

If you’re a fan of Sam Raimi films like the Evil Dead franchise, the 2000s Spider-Man films, or the recent Doctor Strange Marvel movie, you probably recognize actor Bruce Campbell’s name and face. A man of many talents, Campbell has dabbled in comic writing. He returns to the comics sphere again this September as the writer of Sgt. Rock vs. The Army of the Dead.

Campbell and artist Eduardo Risso revive an ancient DC character, Sgt. Rock, in this six-issue miniseries from the DC Horror Presents imprint. Set in 1944 Berlin, World War II soldier Sgt. Rock and his Easy Company are dispatched into enemy territory. Unknown to them, Adolf Hitler has amassed a team of evil scientists who have discovered how to resurrect the dead.

Sgt. Rock and his team must battle Nazi Zombies in this clever action-horror comic you’ll want to fight your way to the front of the line to buy.

Upcoming graphic novel Enter the Blue from Z2 Comics is my most anticipated September comic release for several reasons. First, all of Dave Chisholm’s work is astounding and you should read his previous comics. Second, this book has been delayed all year. My pre-order finally arrives in the mail next month and it will be an occasion meant to be celebrated with triumphant background music.

Enter the Blue follows reluctant jazz musician Jessie Choi. After entering an enigmatic space entitled “The Blue” after playing her trumpet, Jessie abandoned her craft. But when her beloved mentor collapses onstage, Jessie reenters the Blue in a search to save her comatose teacher.

Music and comics combined are a genre quite unlike any other art form. Chisholm crafts diegetic sound in his art in a way that defies reality. Read this transcendent graphic novel yourself to experience the wondrous world of Chisholm comics.