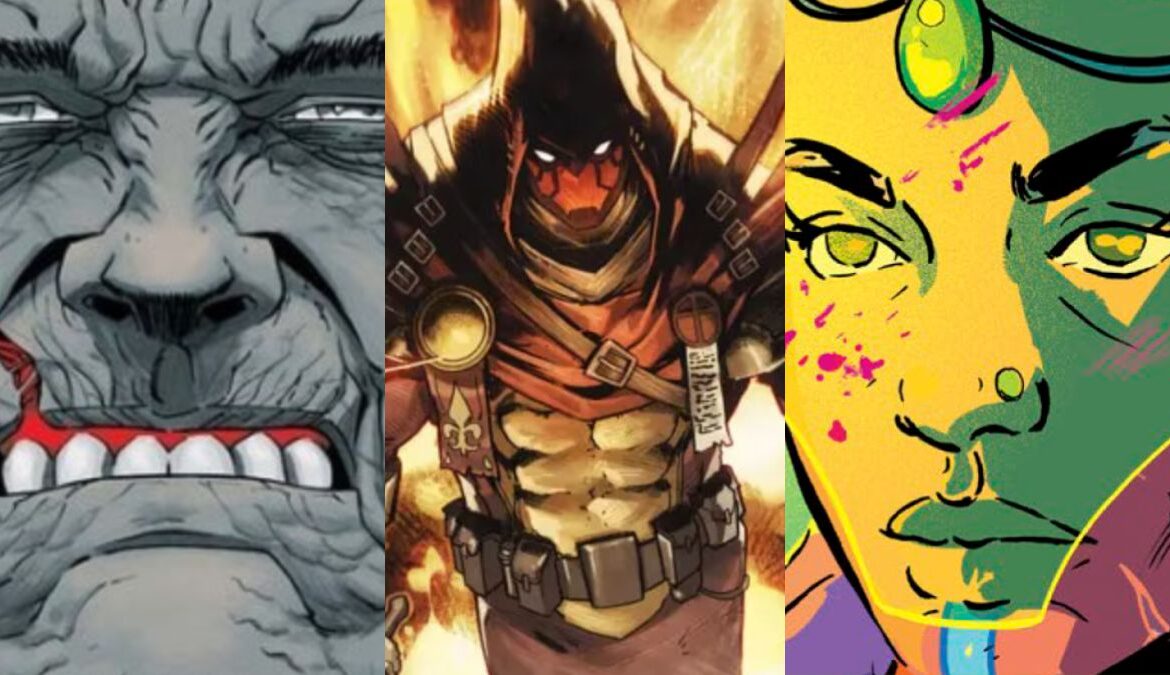 Summer may be winding down soon, but comics are still bringing the heat. There’s a common genre theme across the board with the upcoming August comic releases which will likely draw much interest from sci-fi fans. Whether intentional or not, time travel seems to be the hot topic of the month in the comic industry.

August 2022 will see comics featuring superheroes and supervillains of varying heroic degrees. You’ll see popular comic creators such as Michael Moreci, Dan Watters, Zack Kaplan, Hassan Otsmane-Elhou, and even Patton Oswalt’s names attached to these releases. Without further ado, here are 10 new comics of August 2022 that you should read.

Golden Rage #1 adds to the recent theme of spotlighting older women in action-packed comic series this year, and I am a fan of the trend.

The five-issue miniseries from Image Comics is slated as “Battle Royale meets The Golden Girls.” Grannies are out to fight against their perceived obsolescence in a reality where they have been abandoned on an island to live out the rest of their days. However, some of these women want to spend their golden years fighting to the death rather than sitting around and baking all day.

Writer Chrissy Williams makes her writing debut with Golden Rage #1. With a premise and cover art guaranteeing some bloody action between tough old ladies, how can you not want to pick up this comic?

If you’re not familiar with the intense saga over publication rights this comic has gone through, don’t worry about it. The important news is this: Crash & Troy has finally found a home at A Wave Blue World Inc. and will release the first issue in print this August through the new publisher.

Crash & Troy #1 follows intergalactic mercenaries Rex “Crash” Ballard and Troy. 3.0 in a buddy-action heist comedy tale. After breaking a dictator out of a maximum security prison, the two are too quick to rest on their laurels. Suddenly, they find themselves thrown in prison. Scrambling, they make a deal to recapture an escaped Supreme Leader before he starts an interplanetary war.

Crash & Troy fans and newcomers alike can finally buy this epic comic when it comes to comic shops soon.

Publishing delays aligned the stars, gifting readers with three new #1 Vault Comics releases in August. It’s subjective which Vault comic audiences are most looking forward to, but it’s safe to say we’ve been waiting a long time for more Barbaric.

Barbaric: Axe to Grind #1 launches the new arc of one of 2021’s breakout comic series. After three witches cursed barbarian Owen to perform good deeds back in Barbaric #1, he teamed up with his talking Axe to accomplish his quest of spreading hope and punishing the bad guys. Now, Owen and his magical Axe who thirsts for the blood of wrong-doers, return to settle a score.

Barbaric is rowdy, irreverent, and bloody brilliant in its execution. We can expect the series’ trademark sarcastic banter and bloodshed in the series’ return.

After feeling like the wait for this book would never end, Vault Comics’ End After End #1 finally hits shelves in August.

The story begins with the untimely death of ordinary man Walter Willem. Walter wakes up in a strange version of the afterlife where evil runs amok and everyone he meets is dressed in battle garb. For Walter, this is not the end, but a destiny to end an eternal war if he doesn’t want to meet another end after the end.

Originally set for early 2022 publication, the comic saw a few delays. However, the high fantasy adventure story set in a sort of purgatory promises to be well worth the wait.

It’s top-tier supervillains versus C-list villains in Minor Threats. Twilight City is falling apart, with savage supervillain Stickman on the rampage and the murder of main crime-fighter Insomniac’s beloved sidekick. Meanwhile, the jewelry store robbers and the other costumed baddies trying to create minor chaos are sick of the harassment from the heroes. But when Twilight City begins devolving into a police-state desperate to capture Stickman, these minor threat villains may be just the guys who stop Stickman in his tracks.

I was a huge fan of Head Games and the analogous M.O.D.O.K. show from Oswalt, Blum, and the team. Their trademark humor and affinity for the little guys in comics will surely breathe the same berserk life into Minor Threats as their previous collaborations.

Once working for the sacred Order of St. Dumas as the warrior protectorate Angel of Death, Jean-Paul wants to distance himself from the Azrael mantle. He hides in a European monastery seeking peace. But the life of an avenging angel calls him again when a young woman requires Jean-Paul’s protection from deadly assassins.

In the capable writing hands of Dan Watters and featuring spellbinding illustrations from Nikola Čižmešija and Marissa Louise, Sword of Azrael #1 should be an instant buy for any Batman fan when it releases this August.

The apocalypse arrives at Image Comics this August with the extra-length premiere issue of the 20th Century Men comic miniseries from popular creators Deniz Camp, S. Morian, and Aditya Bidikar.

Supersoldiers, Soviets, and scorched earth politics clash in a comic set in an alternate 20th century. The first issue lays the foundation for a speculative fiction story about a group of activists, geniuses, madmen, cyborg soldiers, and superheroes fighting against imperialism.

20th Century Men #1 is said to shine a reflective light on history and politics where nuanced storytelling paves the way for introspection. The preview pages are intense, flashing back to the Vietnam War and Moscow, Russia in hues of burning orange and green. The best alternate-history comics blend reality and fiction, intending to help readers gain insight into real history, and 20th Century Men looks to fit that bill.

Monsters snuff out humanity in Heart Eyes, leaving only a few survivors at the end of a ravaged world. The enigmatic Lupe somehow has wandered through the apocalypse unscathed and bearing an unusual smile through it all. Lupe stumbles into Rico, a dweller beneath the San Antonio River Walk, as they form an instant connection during the isolated, monstrous end of the world.

I had a chance to read an advanced review of this romantic, creepy story intertwined with good old-fashioned Lovecraftian horror. The detailed interiors and mysterious narrative fire on all cylinders in Heart Eyes #1.

The first issue of the Image Comics series follows once-promising CIA operative, Jack Lynch. One night before his upcoming retirement after an ineffective career in the field, Lynch takes on his final mission. Somehow, he wakes up in a future where the world has changed. A shadowy group offers Lynch a second chance, but the old dog will have to adjust if he wants to succeed this time around.

Shalvey is no stranger to time-travel stories since his ongoing Time Before Time series also tackles time displacement. I’m thrilled to see Shalvey let loose, pulling double duty on both the scripts and the interiors for Old Dog in this crime-thriller solo series.

Another month, another first series issue from sci-fi comic-writing machine Zack Kaplan and an acclaimed creative team. Readers can go back to the future in August with the time-traveling adventure comic Forever Forward #1 from publisher Scout Comics.

Forever Forward #1 has been kept well under wraps, which is great considering time-travel stories are best read without too much information going in. But the solicit preview tells us how brilliant scientist Dr. Lewis Moody uses a time machine and accidentally launches himself 33 years forward into the future. Along with his crush and three best friends, Moody and the crew must continue jumping forward in time to find the key to going back to the past.

On a list including several time-travel adventures, Forever Forward just edges out its contenders for my most anticipated new comic of August 2922. Kaplan is the current king of sci-fi comic writing, producing science fiction stories accessible to mass audiences. Pair his fast-paced scripts with the artistic genius of the artists and letterers he works with, and any comic from Kaplan and company will only amass a larger fanbase as time passes.

READ NEXT: 15 Best Sports Manga You Should Read