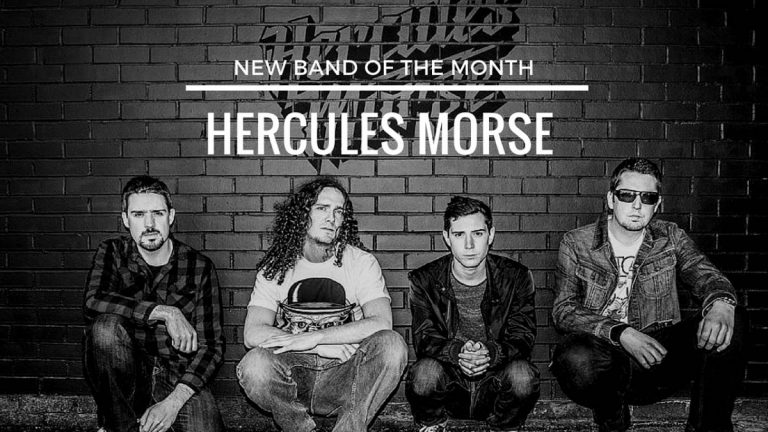 It was a tough little group we’d gathered together for your New Band of the Month vote for March. Well, it had seemed so until you lot unequivocally voted like fevered hordes in favour of Hercules Morse, our and your New Band masters and overlords for the month of March. I hope your happy!

I imagine you are though, because you know, you voted for them and because Hercules Morse’s main manifesto is to provide big muscular rock songs that pack as many mammoth riffs as they do ever so moreish melodies. Weirdly, I’ve just made myself hungry with that analogy. Protein!

Anyway, as is the tradition, having been named your New Band of the Month, we track Hercules Morse for a quick chat to let you all get to know them a little better, and to introduce them outright to anyone who missed the vote. It’s a great interview that mainly thrives on the band having a great sense of humour. Including possibly one of the best responses to the now traditional cultured vulture question so far.

First and foremost, congratulations on being named New Band of the Month by our readers. Pleased?

Immensely so.  This was more deserved than Leo’s Oscar.

We are insufferable megalomaniacs and are relishing being the overlords of March.  Expect to see some pretty big changes during our reign.

On a serious note (don’t expect many of these), we are very grateful to you for the opportunity, and all the awesome people who decided to vote for us.  Love you.

Now then, for the readers that voted for you to get to know you a little better and those that aren’t familiar with you, could introduce yourselves, and tell us how the band came to be? I’ve also got to ask, is the name from Hairy Maclary?

The band were formed after a series of failed medical experiments conducted by the American army in the late 1950s.  That’s all that’s known about their origin.

Yes, it is indeed a reference to the rather lovely book ‘Hairy Maclary’ (for those that don’t know; it’s a story about a motley crew of dogs that go on an adventure together).  Hercules Morse is “as big as a horse” and is some kind of large dog (the Internet tells me he’s a mastiff).

All the best bands are named after fictional canines.

We liked the idea of a literature reference because it’s high brow (just like us), but also the fact that it’s a children’s book, so is inherently a little bit silly (just like us).

Plus there’s the association with Greek mythology and Inspector Morse which are both cool (just like us).

The name works on so many levels.  Just like us…

Listening to your music, there seems to be a definite crossover between a more classic rock inclined hard rock and then a heavier, groovier stoner rock sound. Do you feel those styles blend quite well? That is, if you feel those genres actually apply to your music. How would you describe your sound and main influences?

I hope those genres blend well, because you’ve pretty well summed up what we sound like!

We often draw comparisons to QOTSA and Foo Fighters, which is fine by us.  Our influences are wide and numerous.  From Radiohead to The Hold Steady through to Metallica and Red Hot Chili Peppers. Of course, we also draw quite a lot of influence from the world of stoner rock including, but not limited to Kyuss (obvs) and Hermano.

Outside of the band, and music, what else are you guys into? Any other big passions or creative outlets you pursue? Any shameful hobbies you’d like to share with us?

Shameful hobbies?  I think Steve has a drinking problem.  Does that count?

It’s been a couple of months since you released your EP, Edge of Life, how has the reception been to it? Any plans for a follow up yet, or maybe even a full length album?

The reception has been better than we’d imagined.  It turns out we’re really good.

We’ve been working with Garry at SaN PR, who’s been a total lord and helped us to get some great features that we probably couldn’t have obtained ourselves.

We got some ace reviews in Kerrang! magazine and Rock Sound magazine, plus 5 of the 6 tracks on the EP have been played on national radio courtesy of BBC Introducing, Kerrang! Radio and BBC 6music.

Then, to top it all off; in March 2016 we were elected ‘new band of the month’ on Cultured Vultures.

As much as we’d love to do a full length album, we  simply can’t afford it.  Making music costs a bum-load of money, and we’re all poor.

In a bid to raise funds for recording, Steve tried to sell his kidneys (plural), but no-one would buy them due to all the alcohol damage.

HOWEVER, we have (killer) new material, and will be releasing a new EP (around about summer time), so watch this space!

On record is all well and good, but you sound like a band you need to see live. Are you on tour at the moment? Any gigs coming up that our readers can come catch you live? Festival plans?

You are correct!  You do need to see us live!  We wear amazing costumes and perform hair-raising acrobatic feats.  Last gig our bassist Paul wore a Spandex onesie and did 18 backflips in a row.

We have applied to play at lots of festivals, so we’ll see what happens there.

We have a few smashing gigs booked.  Details below and/or on our splendid website:

Not to steer attention away from our New Band of the Month winners for March, but aside from yourselves, who else would you recommend we check out? Any up and coming bands? Anybody you’ve gigged with? Friends of the band?

One of the (few) joys of playing in a band is discovering new music and making new friends along the way through playing shows.

Check out Freeway Mad.  They spit out ball-busting classic rock and turn everything up to 11.  They epitomise everything that was great about British rock in the 70s, but also add their own flavour.  They’re off to tour in the States in May, which is an incredible achievement.  I believe they’re also laying down an album which will definitely be worth a listen.

White Picket Fence are a brand new band on the Southampton scene, who, from the snippets I’ve heard sound pretty exciting and worth looking out for.

I was impressed by Decapod when we played a gig with them recently.  They shred out mosh-worthy prog metal, which (I don’t know if they will appreciate me saying this) I think is pretty ‘accessible’.  By that I mean there’s a strong sense of melody throughout and a solid smattering of groove thrown in for good measure.  The closest comparison I could come up with would probably be ‘Karnivool’.

Lastly, we’ve got to give a shout out to the most excellent ‘Paves’ who were rightly crowned your new band of 2015.  Expect HUGE things from them this year.

Lastly, but obviously most importantly, we here at Cultured Vultures are represented by a vulture by the name of Voltaire. If you had a vulture who was particularly cultured, what would you call it?

Why do you automatically assume that we don’t have a vulture who is particularly cultured?

We, as a band, adopted a fledgling vulture last year.  We have cared for and nurtured him and provided him with opportunities that most Vultures could only dream of.  We took him to Centre Parcs.   He loves Harold Pinter, writes Haiku and only drinks wine if it costs more than a tenner for the bottle.  He is so very cultured.  His name is Tarquin Victor Archibald the third.