10 Unforgettable Moments in Netflix’s You: Season 3

This show has taken us to dark places. 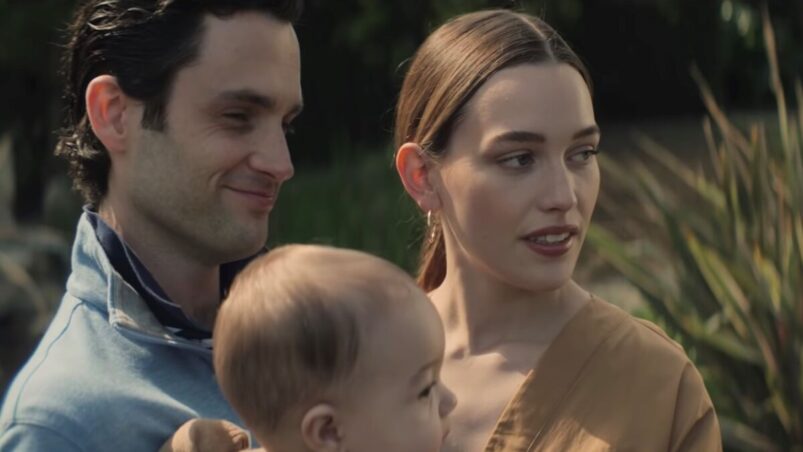 Heavy spoilers for You: Season 3 to follow. You have been warned.

After two seasons of watching Joe go through similar patterns, You changed it up a little this season. There is still the obsessive stalking and infatuation, as well as Joe proving at every single turn how irredeemable he is, however, the dark comedy aspects of a murdering couple was a refreshing turn of pace. Penn Badgley and Victoria Pedretti play these characters with such mischievous glee, and it was fun watching them act with and against each other.

Each season involves Joe moving to a whole new city and location, so the supporting cast changes every time. What You is so adept at doing is giving us characters we assume we will hate (we see them through Joe’s lens after all), and then growing to love them as the series unfolds. I enjoyed most of the new characters, but unfortunately for you Theo stans, you will not find him on this list. I’m sorry, but the way he ate cupcakes has scarred me for life – there are better methods of seduction. I will also not forgive the show for the playback of that moment in Love’s fantasies. I thought nothing could top the cringe-level of “I wolf you”, but Theo and the cupcake really takes the cake.

Here are 10 unforgettable moments from Season 3 of You.

I’m cheating since this isn’t technically a moment, but does it count if I look at it as a series of moments?

Regardless, Love’s wardrobe this season is epic. She slays each look – from blazers to jean jackets, to off the shoulder blouses and high waisted jeans – I love them all. But if I had to pick a favourite, it would be the misa blouse and pants pairing from episode 7’s ‘We’re All Mad Here’. Also, a special shoutout to the gorgeous version of Alice’s dress (i.e Alice in Wonderland) that Love wore to the library function.

This elevation in her wardrobe is intentional, since most of Season 2 involved Love being an ideal in Joe’s mind, thus her outfit choices were safer, so this season we truly get to see her come into her own.

There’s been debate online as to whether Joe and Marienne even have chemistry, seeing as how his fixation with her happened later into the season than we’re used to. Whatever the discourse or opinion, I have to say that the moment I saw this kiss, it was plain as day how much effort had gone into the staging of it.

The sprinklers in the library have gone rogue, which is why Marienne calls Joe down to the library in the first place. Much like Chekhov’s gun, I had a feeling the sprinklers were going to come into play again. And I was right. This time, it only rained down on the pair, and unable to bear it any longer, the two share an extensive first kiss. The numerous angles, the intense slow-mos, I didn’t know whether to cringe or applaud.

The actors did a good job of building anticipation for that scene, so kudos to them for that.

Even though Forty had his annoying moments, James Scully did such a great job with the character that it’s kind of sad he’s dead. So it was really nice to have him come back as a hallucination. Love has gotten herself drunk and is lying wasted in the tub, and before we know it, Forty’s in there with her as well. It’s not the most normal situation, since the two are siblings, but I understand where marthey were trying to go with regard to the staging of it.

After all, the title of the episode is ‘Womb’, and being twins, they were each other’s companions long before they were even born. This is also the episode where we get narration from Love, and it’s nice to take a break from Joe’s extensive monologues. This sneak peek into Love’s mind shows us how much she misses Forty, and the guilt she feels in the part she played in his death. She believed that Joe was her future, and she had to do whatever it took to cement that. Forty was a sacrifice for her to live out her vision of her white picket fence dreams.

It’s such a sad moment, since she doesn’t even have a measure of anything with Joe, who is unable to love anyone.

Like I said, I really enjoyed the dark comedy aspects the show grappled with this season, compared to the usual thriller tropes of past seasons.

Joe and Love as a murdering couple are just hilarious to watch. This particular moment involves the pair having to move Natalie’s body, and they argue as to whether or not to bring Henry. The sight of cute Henry juxtaposed against the horror of Natalie Engler’s dead body is such a darkly funny moment.

Sadly, this aspect isn’t maintained, since we retreat back into familiar tropes later in the season, but it was fun while it lasted.

Love’s murder of Natalie Engler forces the couple to go to therapy to work out their problems. It’s entertaining to see the pair of them speak in metaphors – since they can’t mention the murder – and the best thing is that this therapist is actually good. She helps them see the problems in their marriage, and is spot-on in her observations, well, except for the bit when she says they aren’t murderers.

Just as we think Joe has developed some self-awareness, he regresses again. The problem is, the pair of them are too destructive to make things work between them. Like Joe says, their love language is violence, and they don’t trust each other since they each know what the other is capable of. We all know it was never going to end well.

Joe spent most of Love’s pregnancy thinking he was going to have a daughter. The thought comforted him, since this meant he would have someone to protect. When Love gives birth to a boy – Henry, Joe feels shock and dread. There is fear here, since he never had a proper father figure in his life, and has always sought solace in female relationships. Joe doesn’t feel a connection to Henry, and this is in part due to his worry that Henry will become like him.

The turning point to this is the end of episode 1: Joe is reading to Henry in the library, and eventually this blossoms into conversation. Even though it isn’t possible, Henry seems to be responding to him, with his various baby coos and expressions. The back and forth shots between Henry’s face and Joe’s intense expressions is just too funny and cute.

All these Henry moments are dropped as we go further into the season – since the tension is amping up – so it was nice to have these moments that are much more innocent in comparison.

4. Bromance in the Wilderness

Joe hasn’t really had many male friends. His main point of interest is his love interest, and nothing else outside that. So when he is invited to go camping with Cary and the gang, of course his instinct is to refuse. But he goes to please his wife. Cary’s logic is that this trip gives them an outlet to just be men, and Joe is eye-rolling his way through everything.

However, much like the acupuncture ritual Joe experienced in Season 2, he experiences something similar here – a moment of catharsis where he cries and releases all the pent-up emotions he’s been keeping inside. It’s a nice moment, and Cary’s embrace of Joe shows us what kind of man he is too.

Let me just say, the swingers party is the funniest part of the entire season. I was half cringing, half laughing out loud as I watched the four of them prepare for whatever it is they were going to do.

The hilarious warm-up (watch Joe during this scene and you will surely cry-laugh), Cary’s seduction of himself, the use of hakuna matata as the safe word – you will laugh so hard at the awkward nature of it all. The show loves to do subversive things like this – you’d expect a party like this to be sexy, but instead, you perish from second hand embarrassment.

Also, it takes a turn so quickly – one moment it’s all ha-ha hee-hee, the next moment things have escalated to a full-on battle, arrows and all. I respect the show for taking risks like this, and keeping us on our toes at all times.

When we started the season, Sherry and Cary were an annoying couple – well, Sherry more than Cary. We heard her badmouthing Love at a party, and she got involved with the Natalie search party for clout more than any real concern. But after she and Love become friends, she shows that she is smart and could be a loyal friend. She actually gives Love good advice, and beneath all that posturing, she loves her family very much.

The stakes are high as Sherry and Cary find themselves trapped in the cage. Cary is injured, and when Love adds a gun into the mix, tensions are high as the two bicker with each other. The cage allows us to see the true nature of their relationship, that despite the illusiveness of social media and how the two seem to be so appearance driven, we note that they genuinely love one another. They have arguments just like any couple, but they have methods to work things out, and they are sincere in their use of these strategies.

In some ways, their relationship is a foil to Joe and Love’s, because they truly love and trust one another, while Joe and Love only have obsession and distrust.

As mad as she was, Love Quinn was a great character, and Pedretti’s performance is just outstanding. The moment when Joe drags Love’s dead body and Taylor Swift’s ‘Exile’ starts playing, really made me feel for Love. All she ever wanted was to love and be loved in turn, and instead she got a man who could burn photo albums of their lives together without flinching. It was the perfect song choice, and there is a certain anger felt in watching Joe escape it all once again.

I also wanted to highlight the moment before that, when Love uses Joe’s phone to invite Marienne over with the intention to kill her, before changing her mind when she sees Marienne’s daughter. Instead of playing out the scene as rivals, what we see instead is a sense of empathy, from one woman to another. Marienne advises Love to not ignore the little voice in her head, because that voice is her partner in life.

It’s such a strong message, as we’re often taught that we need to chase love to be complete. Love didn’t need that — all she needed was herself. But she realises this far too late, and is too far gone to ever come back.