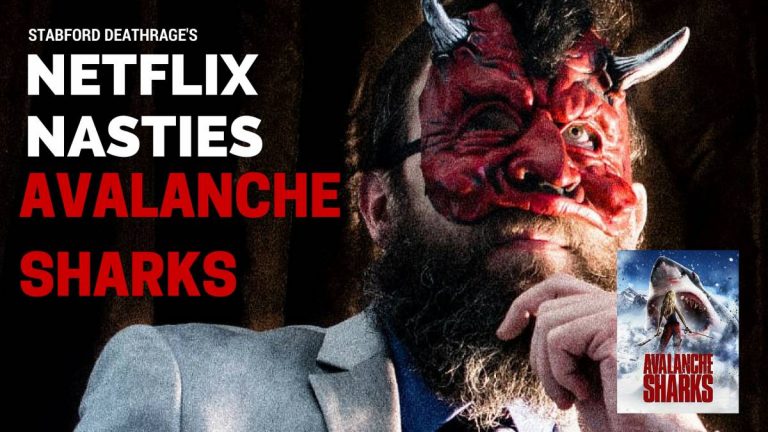 After Native American totems are disturbed, the vengeful spirits of snow-swimming sharks attack hapless skiers because why wouldn’t they in this nonsensical horror film.

Suddenly, someone brings up the Legend of Skookum, the Native American Mountain God, which is a real thing. What does this have to do with sharks? After checking Wikipedia, I’m still not sure. Thankfully, the local coot in overalls shows up at the prerequisite Spring Break shindig and begins pointing at partying young people and screaming, ‘They’re all gonna die!’ and ‘Snow’s gonna run red with your blood’, which is an epic party foul and ruins everyone’s unconvincing Spring Break. In an effort to further character development, Avalanche Shark’s dialogue averages about 4 words per sentence, 5 letters per word, and consists mostly of the words, ‘Whoo’, ‘Hoo’, or ‘Go’.

During a dramatic breakup where someone doesn’t get a ‘sex treat’, a shark inexplicably eats a chick standing in about 2″ of melting snow, leaving half her gooey, quivering carcass. After checking a handily available 25-year old police file filled with a child’s crayoned drawing which qualifies as evidence for the existence of poorly-rendered CGI snow sharks, the coot says, ‘They love people meat’. A dude embraces sobriety and has an existential epiphany about love before being unconvincingly eaten by sharks. A guy shoots a snow shark by stealing the sheriff’s gun right out of his holster, which is totally fine and gets him promoted to deputy, then they drive around hoisting shotguns in the air while riding on a snowmobile. The sheriff gets fired, and a guy inexplicably using a snowblower in the woods near a fallen log gets devoured. I’m not sure why any of this happens.

Friends and loved ones of missing skiers are told they didn’t survive the shark attacks, and it doesn’t seem to bother anyone too much, then there’s a guitar-solo-laden snowmobile race for nookie. The coot recognizes his shark-eaten sled dog from its lung, or liver, or some other plastic-looking organ, then two chicks are inexplicably eaten by a shark attacking them through the bottom of a jacuzzi, while the water inexplicably still contained within becomes stained by their blood. Why spirit sharks can chew through people but teleport through jacuzzi bottoms is never adequately explained, but I’m certain I don’t really want to know because that would add more footage and dialogue to an already tedious film. Finally, the shark attacks are casually thwarted by a tourist eating a granola bar in a moment of mild, arguable racism and extreme anti-climax.

Featuring a terrible script, terrible effects, and nearly two dozen interchangeable and disposable minor characters, Avalanche Sharks is totally boring and makes almost no sense. However, it’s slightly recommended if you like stuff that sucks.