Home
TV
Why Does So Much Kid’s TV Resonate with Adult Audiences?
TV
·4 min read

Why Does So Much Kid’s TV Resonate with Adult Audiences? 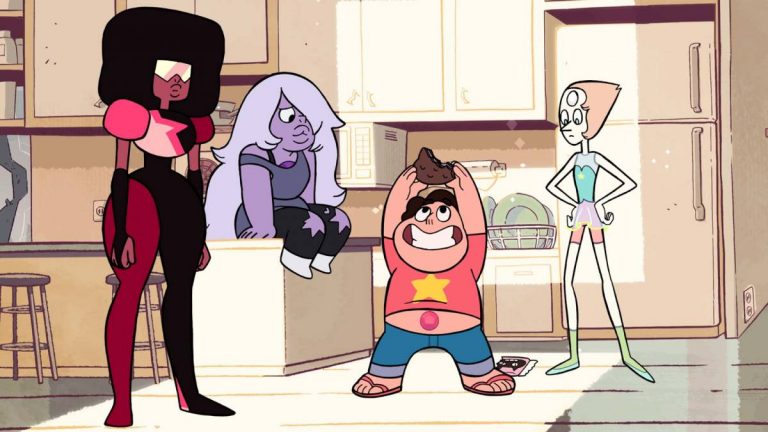 I have always been a child at heart. I still like the same games, I still like children’s movies, and most notably, I am more than happy, if not happier, to watch children’s TV a lot of the time. It has come to my attention that I am far from alone in this. Most recenty, the topic of Steven Universe has been unofficially banned from conversation in one of my major friend-groups, by those who don’t watch the series, simply because we talk about it so much more than anything else, given the chance.

This isn’t just restricted to my own group of friends though. Such a trend towards children’s TV has been seen across the internet. Briefly going back to the example of Steven Universe, a current favourite, we can see the show has an 8.1 score on IMDB, a score that would see it in the top 250 if it were a film. Other ‘kid’s’ TV shows have scores similar, if not higher. Similar evidence of an adult audience for various children’s shows can seen seen everywhere, which begs the question, why?

There seems to be a number of interlinking reasons as to why kid’s TV is so popular amongst an audience well beyond the intended age range. In it’s most simplest form, it seems that children’s TV is just better now. The plot and backgrounds are often much more complex than they were, and this is not lost on an older audience.

The worlds in which these shows take place are infinitely more complex in a variety of ways. The world of Avatar (The Last Airbender and Legend of Korra) is a more realistic take, with toned down colours, and realistic looking protagonists, but it has an in-depth and ever expanding plot and history. A world like Adventure Time thus might seem infinitely more colourful and simplistic with its lack of continuity, but the show is riddled with undertones of a post-nuclear apocalypse, and is haunted with a level of sadness that comes with that kind of imagery. The best shows ideally combine the two, which, again, brings me back to Steven Universe. A show that has gorgeous background and colours, and with each episode clocking in at ten minutes, you’re never far from a satisfactory conclusion. However, as the first series ended, it suddenly became clear that the show was more than just pretty colours and filler. Nothing in that show is coincidental, and the sudden expansion of the plot showed that, as many small details that went unnoticed, were suddenly grappled with.

Other shows prefer to play on what we already know and love, under the guise of refreshing things for a new and younger audience. First to spring to mind would be the semi-recent Scooby Doo: Mystery Incorporated. Another rehash of the same old franchise, it would seem, but it merely uses nostalgia as a basis to go onto more. The entire show is childish and silly, and this makes it great fun to watch. However, there are constant, subtle nods to potentially older audience members, shaped as sly references to the previous series and jokes that go far above the head of the younger viewers. Similar to this is the endless stream of DC shows that refresh and give old favourites a new lease of life, or in my case whilst watching Young Justice, a new whole-hearted respect for characters previously deemed too silly (Aquaman/Aqualad, Kid Flash, Robin).

A unifying feature of these shows, whether it be shows with brand new worlds, or old ones re-imagined, are the characters themselves. One would think that a show aimed at children would have simple, very two dimensional characters, largely divided into ‘good’ and ‘evil’. This is far from the case. Most shows do still like to have the ‘good guys’ and the ‘bad guys’, which is not necessarily different from a lot of adult TV shows, but more often than not the characters themselves are given depth beyond this simple dichotomy.

Again I highlight Steven Universe as the prime example. As the series goes on, we learn that Steven’s caregivers, the Crystal Gems, are flawed and multifaceted, leaving some to believe they are fairly solid representations of various mental illnesses. This in turn leads them to rely on the titular characters as much as he does them, which makes for an endlessly interesting and complex dynamic. What’s more is the endless array of side character who are constantly fleshed out and focused upon themselves, making the world feel that much more alive, and almost real, despite the colours and the magic and everything else.

Last, but certainly not least, is the relative maturity. When people think mature, they tend not to think of children’s TV. As I have hopefully highlighted before, the plot and the characters of these shows are no less than their adult-targeted counterparts. So the one last glaring difference is what children’s TV is allowed to show. And that is anything that would give it a higher rating: blood, sex, violence, gore. You get the idea. These are often associated with maturity, you have to be a certain age to watch these things happen on a screen.

I would argue the opposite. These are very basic, and often overused, tropes. What is easier than showing how ‘dark and gritty’ something is than having these tropes littered throughout a show. Easiest way to highlight the bad guy? Make him swear. Easiest way to cause shock? Gore scene. These tropes are so easy to use, and children’s TV, for the sake of being children’s TV, cannot use them. This forces the creators to be more inventive. They can’t fall on the easy to display these things, and thus the ways they use are infinitely more complex. And it because of this that I’d argue children’s TV can be more mature than a lot of elder stuff.

So my conclusion is children’s TV is popular with an older audience because it’s good. It really is that simple.