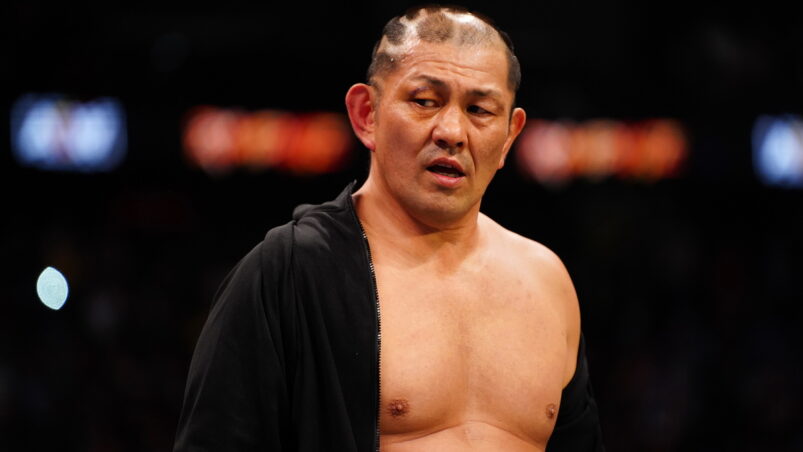 When ‘The King of Pro Wrestling’ stepped through the tunnel at AEW All Out 2021, wrestling fans around the world rejoiced at the idea of having Minoru Suzuki competing on a regular basis against some of the very best in the world on American soil. With the Forbidden Door well and truly kicked down, Suzuki was a perfect star for AEW to exploit as part of their ever-improving roster. Fans of New Japan Pro Wrestling are more than clued in on how great murder grandpa can be, the hard-hitting, in-ring style he innovated has transcended borders, leading him to success in both the US and the UK. With so many dream matches left to tick off Suzuki’s list, and the potential for a championship run in AEW, made for one of the most exciting debuts of the year.

Suzuki wasn’t hanging around, as he immediately jumped into the ring and traded stiff forearms with AEW headliner, Jon Moxley. Wrestling fans have been waiting for a rematch between Mox and Suzuki, ever since their first spat when Moxley made the transition into NJPW before the pandemic. Both brawlers have a natural chemistry with one another and fans have been sitting on their hands waiting for a true spectacle between the two since Moxley first left WWE. This match could have easily been saved for the Full Gear PPV, but Tony Khan pushed for the match to take place less than a week after Suzuki’s debut. Moxley and Minoru headlined the following Dynamite in Cincinnati, a perfect homecoming for the former AEW World Champion and a real treat for those in attendance. It felt like a huge deal!

Suzuki continued his mini-feud with Moxley and even called upon his Suzuki-Gun compatriot, Lance Archer, to aide in delivering some savage violence. Suzuki and Archer battled Mox and Eddie Kingston once again in a Lights Out match on Rampage, another ridiculously hype match that could have been placed on any major card. You wouldn’t be wrong if at this point you were wondering why TK would want to give away not just one but two stacked, marketable matches on free TV, something was telling me at the time that Minoru wasn’t hanging about for long before heading off elsewhere, alas another dream match was soon to be unveiled.

Bryan Danielson vs. Minoru Suzuki, a match that could easily fit the bill of a pay-per-view main event. A little known fact is that both Suzuki and Danielson did meet prior to their AEW clash, albeit back in 2004, but this particular encounter in 2021 felt like it could have rumbled the very foundations of the Tokyo Dome. Suzuki and Danielson were a perfect match in the eyes of the fans, with both wrestlers favouring a hybrid MMA style, focusing on holds and hard strikes. Watching the match unfold, you knew there was something special taking place in the squared circle and the buzz didn’t subside for almost half an hour. The forearm spots, the nasty submissions and the fast and furious finale were all worthy components of a potential MOTY candidate in my books.

Yet once again, this match was given away for free, although this time it wasn’t even on the main card of a show. You heard correctly, Bryan Danielson vs Minoru Suzuki, a potential 5* classic, was in fact given away on the Buy In of Rampage, the unofficial second show of the promotion. Now, don’t get me wrong, I’m all for must-see wrestling taking place on pre-shows, but there comes a time when you have to recognise that there are certain matches that you need to exploit for business reasons. This match should have been saved for Full Gear, in my opinion. Minoru Suzuki is a big enough star that he warrants that pay-per-view slot, especially when he’s doing what he does best with one of the best in the world.

I was very glad to see that the live audience treated it like the dream match it was, and not just a throwaway prelude to the fight between Danielson and Bobby Fish later on in the show. Minoru Suzuki looked like a wrestling celebrity throughout that match and the fans gave him the respect he deserved. This felt like it could have been Suzuki’s last dance in All Elite Wrestling, at least for now anyway. With the Moxley feud wrapped up and the Danielson match ticked off the proverbial bucket list, it now leaves the question of whether Suzuki can be better used elsewhere. Rumours seem to point towards ‘The King’ taking his business to Impact Wrestling, a promotion synonymous with importing Japanese wrestlers to help boost their credibility. Suzuki could be a great asset to Impact and should see them through to the spotlight over the course of the next few months.

Needless to say, the few matches Minoru had in AEW were all worth the watch. He might not get the due credit for it, but I personally see him as an unsung hero of AEW’s roster this year, even if he was only sticking around for these three matches. He brought with him a buzz like no other and commanded respect from audiences that may not have all been familiar with his work. When you’re sharing cards with the likes of CM Punk, Kenny Omega, Adam Cole, Sting and Bryan Danielson, you need to bring something special with you, and that’s precisely what ‘The King’ did.

READ NEXT: 5 Matches That Should Be Booked Following The WWE Draft 2021