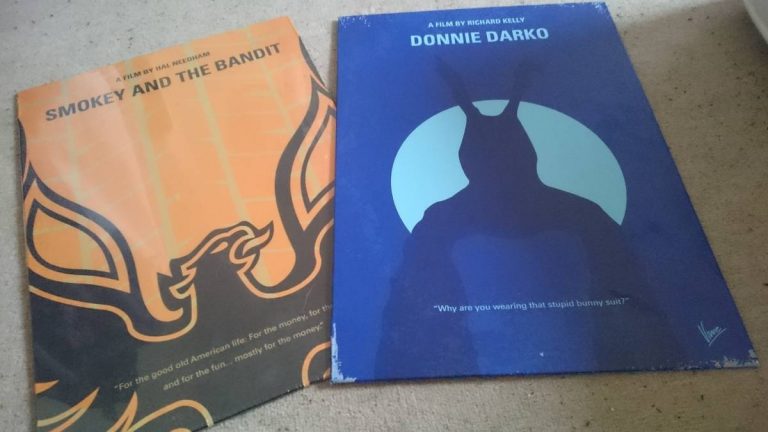 Working part-time at a cinema certainly has its perks. Being an avid collector of all things nerdy, I take any opportunity to pick up a free movie poster whenever I can. So when the guys at Displate said they were interested in sending me some of their unique metal posters, you can bet that I was more than a little excited.

After browsing through their wide variety of different categories, I opted for film posters. Displate also offer posters inspired by television, architecture, pop art, video games and many, many more. It’s an impressive selection and one that you can spend far too long browsing when you should be doing work, as I quickly found out.

Once the posters arrived, I was pleased to see that the photos were a fair reflection of the finished product. I received three in total: one based on Donnie Darko, one on The Godfather and the third on Smokey and the Bandit. I wasn’t too familiar with the latter, but I guess it’s given me a reminder to tick another film off of my watchlist. The quality of the posters, both in texture and sturdiness was pretty obvious as soon as I unwrapped them – there was no flimsiness to them at all. They would all last me years and not suffer from the annoying rips and signs of wear that regular posters do, very handy for someone like myself who doesn’t know how to look after anything!

The design of the posters were minimalistic, something I adore, and abstract. They all draw on themes from their respective movies and have a quote at the bottom of them. The Donnie Darko poster is possibly my favourite as Frank is such an iconic character and the the design is so eye-catching that it’s hard not to be immediately drawn to it.

When it came to applying the posters to the wall, they all came with easy instructions that were straight to the point and easy to understand. I simply had to peel a sticker off a magnet, stick said magnet on the back of a poster and place it on the wall, easy as that. Although mine stuck to the wall with no problems, you might want to check that the paint on your wall won’t be affected by the adhesive on the magnet. This could be a problem for some people, but there aren’t many limits to where the posters can be placed – I even have one on my radiator!

If you’re looking for quality posters that are sturdier and something slightly different from the norm, Displate have you covered. What’s even better is that they are environmentally viable – buying one of them helps to plant ten trees! You have no excuse to not at least check them out over at displate.com.