Marvel’s Guardians of the Galaxy Has MCU Outfits 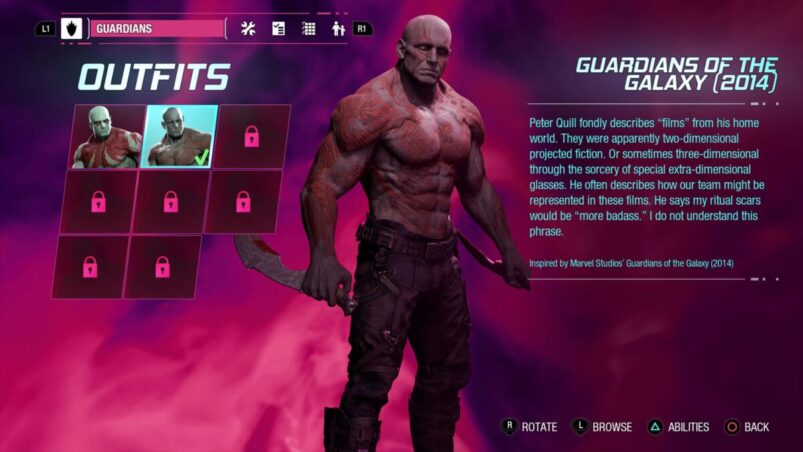 If you saw Marvel’s Guardians of the Galaxy and felt a bit disappointed that it wasn’t in the same canon as the movie universe, the game has a compromise for you: there are MCU outfits for the Guardians that you can unlock.

We first encountered an MCU outfit for Drax in Chapter 4 of the game, though you can actually find one for Rocket and Groot on Chapter 1 as well. Gamora’s MCU outfit is available in Chapter 3, and then Star-Lord’s can be found in Chapter 6 on Knowhere.

Here’s where you can find the Drax skin in Chapter 4:

Check out a full showcase of the MCU outfits below.

To change your outfits in Marvel’s Guardians of the Galaxy, go to your Guardians menu and then hit triangle or Y on your controller. Changing outfit one time will give you a trophy/achievement.

It’s worth bearing in mind here that these outfits aren’t fully the same as the MCU versions as they obviously can’t get the licenses for Chris Pratt etc, so the outfits still have their game faces.

However, it’s definitely better than in Marvel’s Avengers, which took forever and a day to add their movie counterparts. The MCU is inseparable from all things Marvel for a lot of fans, so it’s nice to see those fans have been catered to with these collectibles.

Marvel’s Guardians of the Galaxy is available now on PC, PS4, PS5, Xbox One, and Xbox Series X | S.

READ NEXT: Is Marvel’s Guardians of the Galaxy Open World?