‘Writer and Broadcaster Mark Ellen was born at the wrong time. Five years older and he would have seen The Beatles and The Byrds; five years younger and he’d have been plunged into punk rock’.

Growing up, Mark Ellen believed that he was born out of time, with the blurb of his book, published earlier this year, offering a great example of that idea. Rock Stars Stole My Life: My Big Bad Love Affair With Music, is a perfect memoir of one of Britain’s best music journalists and his 50-year love affair. Ellen has worked at NME, Smash Hits, Q, The Word and on shows such as Old Grey Whistle Test, Live Aid and much more. The list of musicians he has interviewed is also seemingly endless, featuring everyone from Jimmy Page whilst ‘fell-walking’ to a rather naked Lady Gaga. 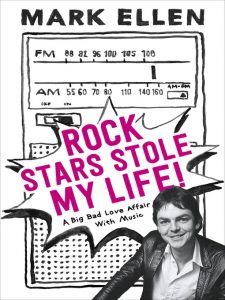 I was lucky enough to be invited along to hear Mark Ellen talk about his book at the Chester Literature Festival, as well as getting the chance to talk to him myself. Ellen had already made an appearance at this years festival, interviewing legendary punk rocker John Lydon earlier in the programme. However, he still had a great turn out of people wanting to meet the man who is truly one of the loveliest people in the music press.

As a youngster, Ellen was an aspiring rock star, forming the band Ugly Rumours with his fellow Oxford students, which included none other than Tony Blair as the vocalist. As a teenager, Ellen began reviewing gigs and hounding the music press, hand delivering his articles on a daily basis. Eventually he was offered the chance to review Elvis Costello, which didn’t go quite as planned. He arrived at the show to find his name not on the guest list, but made it into the show anyway. Whilst backstage with Elvis and co, he was asked which publication he had been sent from, the answer to which was met with Ellen being kicked out as the magazine had slated Costello’s most recent work and his management had vowed to kill anyone they sent over. However, things soon picked up and Ellen soon became one of the most well-known music journalists of his time, kicking off his career as a staff writer for NME before becoming editor of Smash Hits and later co-founder of Q. Whilst Ellen enjoyed his time at NME, he felt that he wasn’t quite as cool as his co-workers, whereas Smash Hits (which was directly across the road from the NME offices) was a much more relaxed and fun place to work.

During his talk at Lit Fest, the audience were offered plenty of hilarious anecdotes from throughout his career, some of which have brought him into a little trouble as of late. From tales of co-workers not turning up for work because they’ve overdosed and an impression of Tony Blair on stage in a little half-shirt, to interviewing Jimmy Page in his forties whilst on a fell-walking holiday with Roy Harper, a couple of 18-year old girls and plenty of drugs. In fact, on his train journey to Chester, Ellen had received a call about interviewing Page live in Paris, to which Ellen replied ‘er, has Jimmy read my book? Probably not the wisest idea’.

Along with writing and editing the biggest and best-known music publications in Britain, Ellen occasionally stood in for the legendary John Peel on Radio 1 (who compared watching someone present his own show to watching them sleep with his wife) and eventually became a presenter on the Old Grey Whistle Test, an all time favourite of mine. One of the biggest moments of Ellen’s career however, was being the frontman for 1985’s charity event, Live Aid. In the past few years he’s interviewed Lady Gaga in her dressing room whilst totally naked and spent a week on Rihanna’s jet, which was part of a shambolic tour in which she was supposed to play seven gigs in seven days across the world.

Apparently Ellen was rooting for the Rihanna tour to fail from the offset, so as to be an example of the ridiculousness of the music industry and obscene expense involved. He was not disappointed, as after receiving a plastic cup of champagne from Rihanna, she didn’t emerge from her quarters for the duration of the trip and turned up late for most of her shows due to being rather stoned. Spending much of their time on the plane due to delays and being pressured by their editors for interviews, the press eventually began to riot, chanting ‘just one quote’, before someone eventually streaked to diffuse the situation.

With a love affair with music that has spanned over 50 years, Mark Ellen is still well and truly in the game. He finished up his talk with a debate about the best song ever written, which he declared as being ‘Sunny Afternoon’ by The Kinks, with The Smiths’ ‘This Charming Man’ as a close second. After the talk, I was given the time to talk to the man myself, during which he offered me advice as an aspiring music journalist.

Ellen remarked on how much the music press has changed over the years, now more than ever with the impact that the internet and social media has had on the industry. He explained how difficult it was to get into music journalism when he was young, as there were only four main outlets in the form of the big magazines at the time. To catch a break, Ellen paid for gigs out of his own pocket and hand delivered his reviews on a daily basis. His persistence paid off and as a result, he has become one of the most influential and recognisable music journalists in Britain.

The internet has become a platform for everyone to be a critic, from writing for websites to writing their own blogs or simply using social networking to get their views across. However, whilst the internet makes it much easier to get your work out there, it brings about plenty of new problems and difficulties. The fact that anyone can produce content online has made it harder for those with talent to catch their break and to stand out amongst thousands. Ellen commented that whilst he was limited with his outlets as an aspiring journalist, it meant that everyone that had a job within the press was of the highest quality, because jobs were so scarce.

After talking to me about my experiences trying to further my work in the industry, shows I’d reviewed and folk I’d interviewed, Ellen urged me to continue writing and advises others to do the same. He recommended his approach of reviewing every show, album and single that you can get your hands on, before continually shoving it in the faces of anyone that will read it. Hearing Ellen reminisce so happily about his career, offering sound advice and finishing off by signing some lovely words in my copy of his book made for an excellent and inspirational evening. Rock Stars Stole My Life! really is a fabulous and hilarious read as well and I’d like to urge anyone interested in the music industry to grab a copy and give it a read. Even if just to hear about Jimmy Page’s fell-walking shenanigans, Bob Dylan’s smashed Live Aid performance, or Tony Blair strutting around stage in a half-shirt.