Mae Young Classic: 5 Best Losers Of Round One 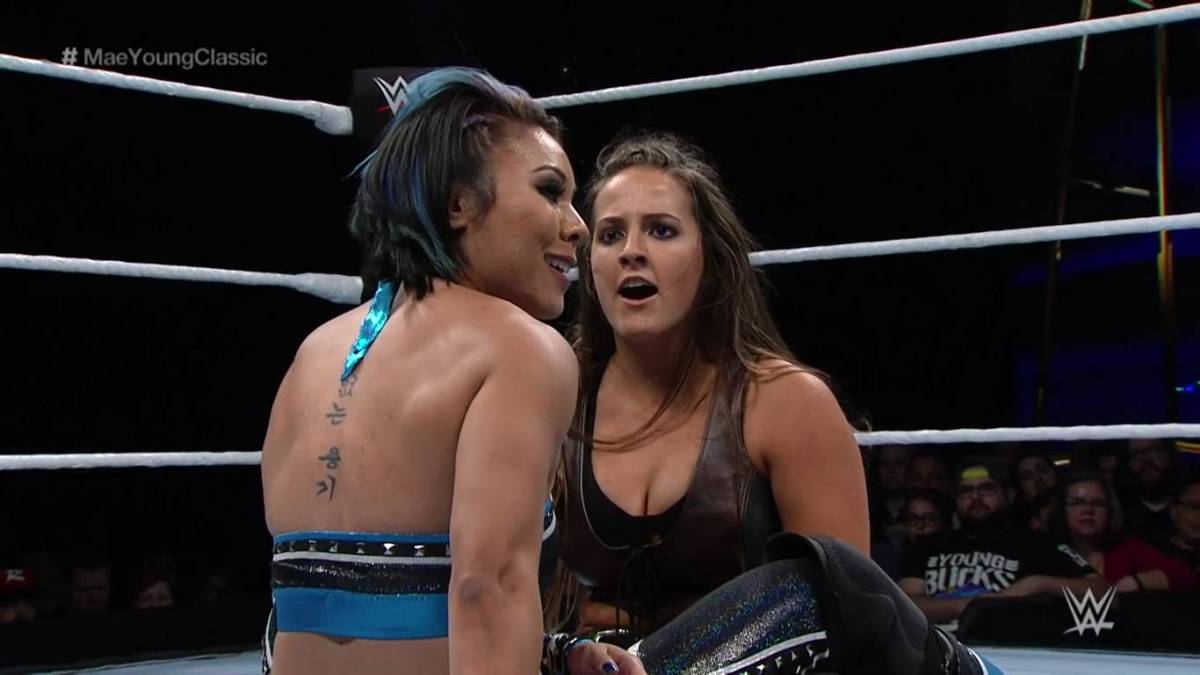 The last three-count of the Mae Young Classic’s first round has been counted. After a mixed bag of matches, sixteen women roll on to the quarterfinals, hinting at who WWE has cherry picked for big things.

But, as Jim Ross repeatedly revealed to us in revelatory tones, the Mae Young Classic is a single elimination tournament. For some reason, this was treated as a major departure from previous wrestling tournaments, but it does mean sixteen wrestlers are heading home after only one match. Not all of the losers need be disappointed, though. A few will return to their indie roots, or NXT, having grabbed our attention.

Who, you ask? Here are the top five losers from round one of the Mae Young Classic.

It probably didn’t hurt Kay Lee Ray that her Mae Young Classic outing was opposite a twenty year veteran in Princesa Sugehit. Even so, Ray managed to squeeze in some pretty innovative offence inside such a short match, acquitting herself well with some unique strikes and fresh submissions.

Ray has the size and look to do well in WWE, if she at any point decides to put pen to paper and sign on as an NXT developmental talent. Right now the UK indie scene is probably still hot enough for this not to be a necessity, however. At twenty five Ray still has time to flesh out her adrenalin junkie gimmick before stepping up to the big leagues.

The word that comes to mind when I think of Santana Garrett is “polish”. She’s athletic, fast and always delivers a solid WWE-style match. That she had someone as unique and talented as Piper Niven (Viper on the indies) to work with in round one probably didn’t hurt either. Garrett’s shown up on NXT from time to time in recent years without ever actually signing with WWE – probably because she’s been working with the likes of Io Shirai, Toni Storm and Kairi Sane in Stardom over in Japan.

In the Mae Young Classic she looked like a veteran. Her babyface work was somewhat lost in the shuffle with the crowd so hot for Niven (despite her working heel for the match), but she bought just as much to this bout as her opponent. Whether she chooses to sign with WWE after the tournament or keeps plugging away in Stardom and Shine, Garrett has definitely boosted her profile.

If Jazzy Gabert wanted to, she could have a very solid monster heel run on WWE main. But this probably won’t surprise fans who know her by her indie name, Alpha Female. What’s most striking about Gabert from her Mae Young performance is how well she has the small details of her performance down to perfection. We’re unlikely to see her go to the top rope or attempt a suicide dive, but her power moves and facial expressions are flawless.

And, just for a moment, I’d like to talk about Gabert’s selling against Abbey Laithe. Not only can Gabert sell incredibly well, she knows when and where to do it. Her no-selling early on against Laithe was the perfect set up for her eventual downfall at the hands of her opponent’s quicker, more precise offence. When you’ve been wrestling in Europe and Japan for fifteen years that’s probably not surprising. I’m left wanting to see more of Gabert, if only to see how she’d play a Raw crowd when thrown in the ring with Bayley or Sasha Banks.

I’m going to tell you something now which is going to make you cry. Tessa Blanchard is twenty two years old. Tessa Blanchard is five years my junior and can deliver a flawless top rope senton like it’s no big swig. Perhaps it partly came down to being in the ring with someone as legitimately great as Kairi Sane, but Blanchard displayed a scary amount of improvement here compared to the last time we glimpsed her on NXT. Developing at that kind of speed can only mean one thing: the daughter of Tully Blanchard has a shot at being indisputably great.

While the Full Sail crowd had clearly gone all in on Kairi’s pirate princess thing (and who wouldn’t? Putting the words Pirate and Princess together is the best gimmick idea since King of the Ring ‘96) Tessa played a major part in making this the best match of the first round. If she’s good on the mic, we could be looking at the next Charlotte.

Your’s truly has become something of a mark for strong style in the last twelve months, so you can imagine my slack jawed disbelief watching Sarah Logan throw down with Mia Yim (A.K.A Jade in TNA) like that in a WWE ring. We’ll be talking more about Mia Yim here at Cultured Vultures as the Mae Young Classic continues, but right now allow me a moment to geek out over Sarah Logan.

Sarah Logan, formerly known as Crazy Mary Dobson out on the indies, has apparently been signed to NXT for a little while without me having noticed. Because if I had noticed Sarah Logan before, I would not be marking out quite this hard over her cool southern girl gimmick and her strikes and her knees and her badass fisherman buster and stop me before I run out of breath. For about seven minutes it was like I was back in July watching the G1.

In defeat, Logan comes out of the Mae Young Classic with momentum. If rumours are right and the tournament’s first four episodes were the most watched content on the WWE Network last week, Logan has done a lot to boost her NXT profile. Next time she walks out at Full Sail, she’s getting a real pop. In fact, along with Mia Yim, Logan is the perfect wrestler to elevate to the NXT women’s division right now. As a fresh opponent for the likes of Nicki Cross, Ember Moon, Ruby Riot and the Iconic Duo she might be second only to Kairi Sane herself.

Basically, I think we need a second hour on NXT you guys.