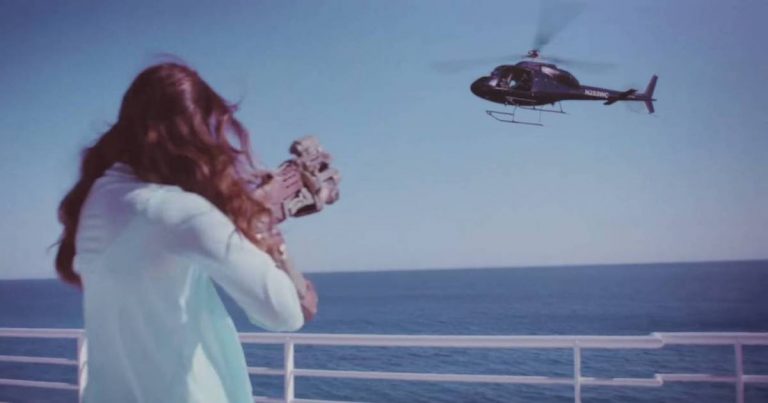 Lana Del Rey has always been that slightly obscene member in the world of fame and Hollywood, supported with her music being promoted and used in fitting scenarios within “obscene” TV shows, such as
American Horror Story

, which featured one of Del Rey’s most controversial song, Gods and Monsters, being performed by Jessica Lange. She’s networked well into the world of Hollywood as her friendship group contains an irregular array of stars from Kanye West to James Franco, who is the soon to be author of her biography. Consequently, her involvement with these celebrities has taken a toll on her private life.

She has always seemed to have an independent train of thought, with no influence from the external world around her, her only influence being her internal world and what she’s been exposed to. Throughout the years her albums have been very true to herself and her story, unravelling the true Lana Del Ray that is Elizabeth Grant. Dealing with the issues she’s had to face herself as an adolescent such as alcoholism and men with a “cocaine heart”, which doesn’t sound all that great. She opens up about her past in her songs, but is somewhat mute about it in interviews and on social media.

Her most recent song, High by the Beach, is a giant fuck you to the media and paparazzi. The music video carries Del Rey’s typical vintage style, some parts similar to that of Video Games: elegance, ambient scenery, and, unlike the rest, this has a hint of satire. With some strange features, we’ll never understand the true purpose of the repetitive movements; however the whole moment is ruined with a helicopter, which will not fuck off to put it in the politest of manners. So seeing as they ruined her perfect, peaceful time at her beach house, she simply blew them up, until they become nothing more than their false words. Feeding people what they wanted to hear rather than what they needed to hear, with the possibility that she believes there are more important things that needs coverage rather than her.

The song itself can be interpreted with several meanings that Del Rey wanted to put across; the first being that her privacy is a valued asset to her. It’s a right that’s been breached to an extent where she can’t even get high by the beach, the simplest of requests from an artist with 11 awards. Furthermore, she makes it very clear that money is not the motive for her success.

She worked for it, and she states in the bridge of the song she can do it on her own, the independence becoming something that’s more noticeable within her music rather than the dependency on the unknown “Daddy” character in her previous albums. Within the song, there’s reference to her earlier days as Lizzy Grant with her song Put me in a Movie, featuring the exact same lyrics in High by the Beach, “Lights, camera action”, the dream’s still the same but the fuel for it has changed. Petrol to diesel maybe?

Lana Del Rey is a respectable artist that some may not understand, but her new song could not be any clearer. Although it can branch off into several interoperations, it still has that backbone and the ideology that the media is too involved in what famous people are doing, even if it is nothing, and that not all of them will sell their soul along with a fake over dramatic story all in the name of money. So next time you try take a picture of Lana Del Rey while she’s chilling at her beach house, be warned, she may blow you up.

Do you think Lana was right in blowing up the helicopter? Lets us know what you think and comment below!