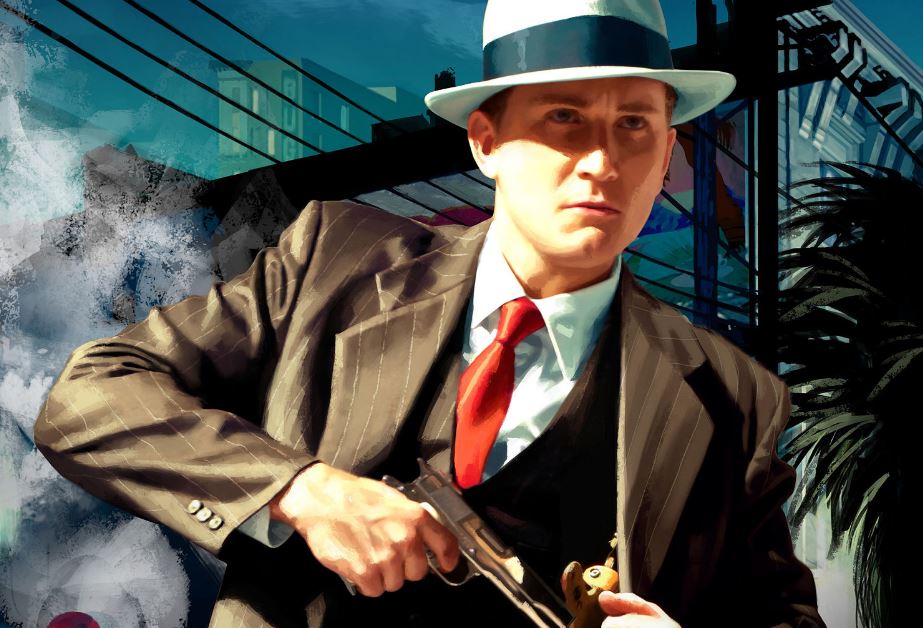 LA Noire is one of the many games that have seen a fresh lick of paint recently, having been remastered and re-released onto the PS4 and Xbox One, as well as the Switch. When L.A Noire was first released back in 2011, it was very well received by the gaming community, with some going as far as saying that the game really did take storytelling to the next level. These days, we have Telltale et al, who have really raised the bar of storytelling in games, but I can remember working in a game shop at the time, and everybody was raving about it. I never actually got the chance to play the game when it was first released, so I was genuinely looking forward to reviewing it for Cultured Vultures.

Set in a corrupt LA in 1947, we are thrust into the shoes of Cole Phelps, a returning veteran from the war in the Pacific as he steps into the boots of a police officer and trades one enemy for another. As the game progresses, we are assigned four different departments: Traffic, Homicide, Arson and Vice, each with an average of 5 cases to solve. Homicide were by far the best cases to solve, with the overall story of each case petering out as we started our stint with Vice, something I found to be a shame. The remaster also includes those cases that were previously only available through DLC. 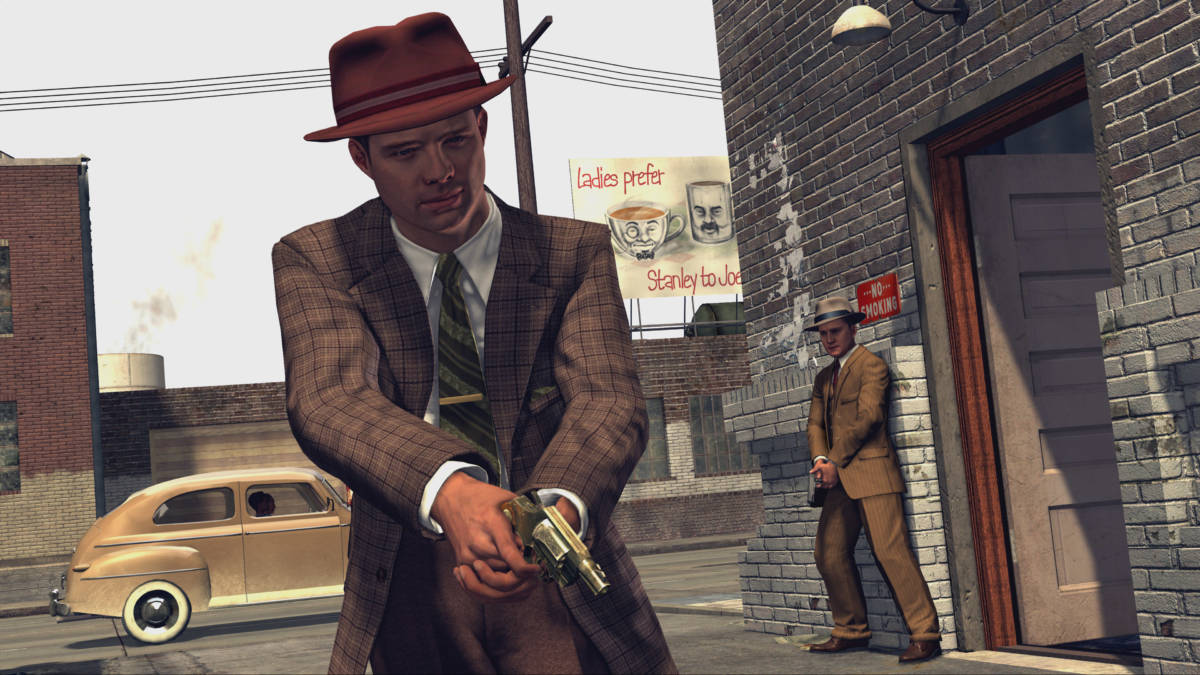 One thing LA Noire does, and does well, is tell a story with each case giving you the impression that you are watching a crime show on daytime TV. As you push on to solve the case, discovering clues and interviewing suspects, the plot around each crime thickens and you must really be on your toes to snag a conviction. What LA Noire did was keep me playing, something that I find rare in games of this genre (crime games usually aren’t my thing), with each completed case giving us a little more backstory of Phelps and his time during the war.

But where LA Noire really does go above and beyond is gameplay. I’ll admit straight off that some aspects of gameplay were really irritating and felt outdated. Driving around in the open world felt more like a chore than anything else as I found the driving controls to be clunky and sometimes it felt like I was trying to steer my Nan around the streets of LA. There is an option to allow your partner to drive to each location, and this is the route I usually went down, except for when the game forced me to drive in car chases to apprehend suspects. Combat is also a little bit awkward as the auto-aim system usually forces you to take on the closest threat, but it can sometimes take four or five bullets to really finish off an opponent. The combat system now feels slightly antiquated as it utilises the duck and cover technique, something that has been perfected in other games over the years since LA Noire’s release. 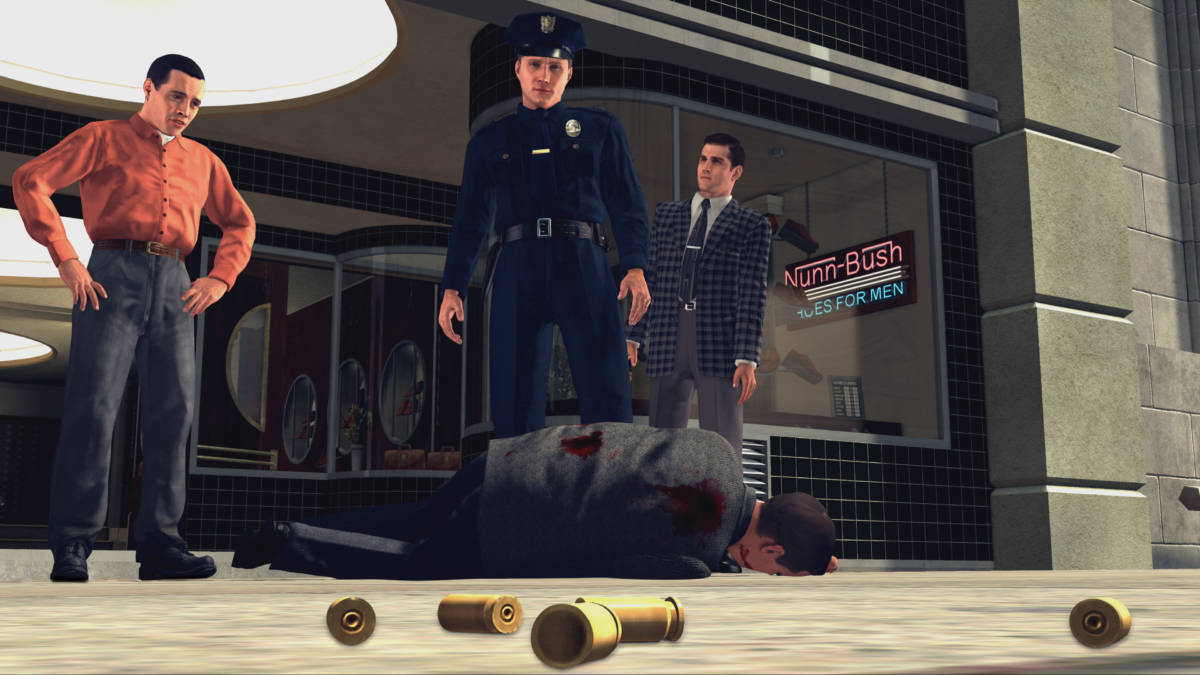 Solving cases in LA Noire is really where this game shines. As you start a new case, you must examine the crime scene for every scrap of evidence you can find, manipulating objects to certain angles so you can really catch those fine details. As you progress through the case and travel to different areas, there are more clues for you to find. There are two ways that the game tells you that you are in an investigative area: The music changes slightly and the game indicates that a clue is nearby by showing a magnifying glass at the bottom of the screen. Once you have found all the clues in the area, then the music will stop and you are free to progress. It is not always essential to find each clue, however, if you miss any, then this could lead to a lower rating at the end of the case, and also impede your chances when you interview a suspect.

LA Noire utilises the MotionScan technology to really take interviewing suspects and solving crimes to the next level. MotionScan works by using 32 cameras in different positions in order to really catch every single facial expression that was made by the actors. It is this technology that proves key to the success or failure of your interrogations. 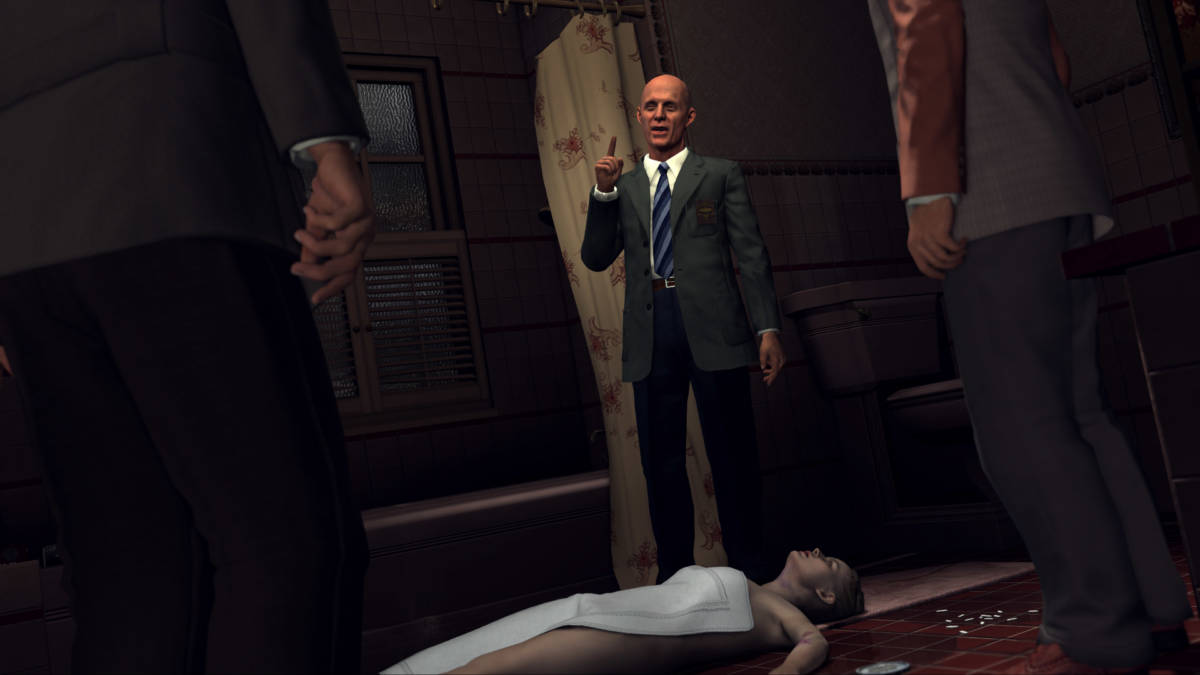 When interrogating suspects and witnesses, you are given three options: Good Cop, Bad Cop or Accuse. As you ask a question, you must wait a few moments to see their facial expression. If they are straight-faced then you can be almost certain that they are telling the truth, but if their eyes move, break eye contact or can’t seem to keep still, then you can either force a response from them or call them out on a lie.

If you do decide to call them out on their lie, then you must be 100% certain that you have the evidence to back that up. If you don’t then this can affect your overall rating at the end of the case, but also cause a conviction to slip away. That is why it is important to ensure you have collected each and every scrap of detail while investigating crime scenes. You are able to backtrack if you think you have made a mistake, with Phelps really coming through so that you don’t look like a fool. 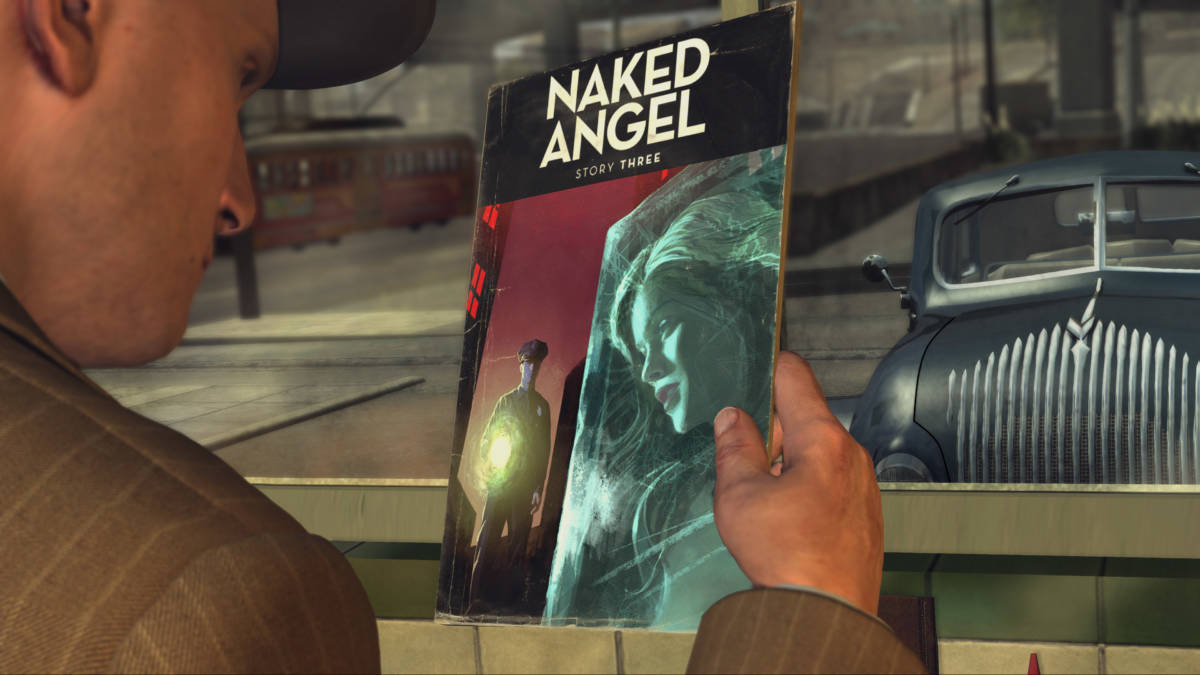 It is here that the developers at Rockstar decided to make a few changes. In the original game, Phelps often tended to go psycho when you called their answers into doubt, something players found to be not only over the top, but a little weird too, so when the time came to remaster the title, they toned down his responses a bit. The game’s producer explained that the reason for this was because the original command was ‘Force’ so the actor really went all out, but they changed the prompts before release, so the actor’s responses came across as a little, well, nuts. But even with the changes in prompts to Good Cop, Bad Cop and Accuse, I still found that Phelps’ dialogue seemed a little out of context.

Rockstar have done a fantastic job of recreating the now defunct Team Bondi’s slice of history, with the game world really giving you not only the look, but the feel of the 1940’s. However, due to the clunky driving controls, I did not really find any overwhelming desire to explore the city, and the sections I did explore felt empty and a little repetitive. When travelling to locations while working a case, you are also able to respond to emergency calls over the radio. These can be anything from hostage situations to armed robberies and it really does add a nice change of pace to the overall style of the game. There are also newspapers to collect as you progress through the story that provide snapshots of the backstory through newspaper headlines and flashbacks. This was a nice touch as it really did fill in the blanks that the main plot sometimes left out. I also felt that the game world lacked any real polish, and the buildings all tended to be the same texture and on one occasion, I drove around a neighbourhood that was an exact copy of one I had driven through a few moments earlier. 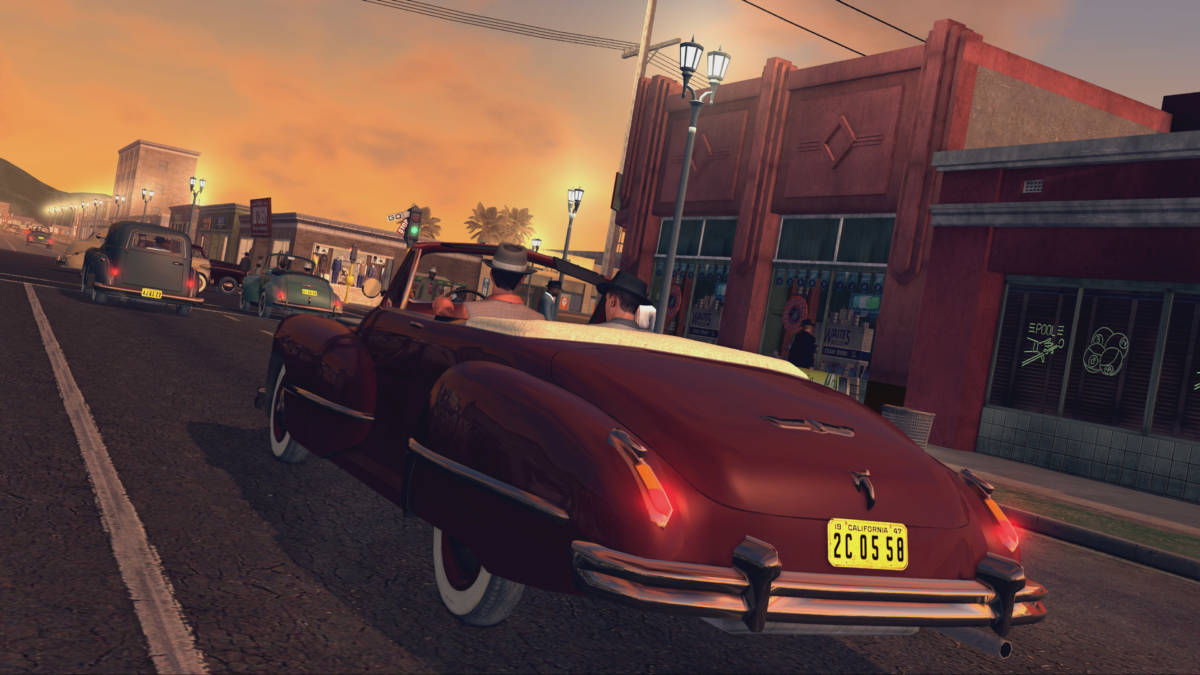 Although solving cases, searching for evidence and interrogating suspects and witnesses is really what this game was built upon, I found that as I was halfway through the Arson cases, I was beginning to lose interest. Make no mistake; although each case is very different from each other, the actual gameplay tends to be repetitive and often felt like hard work.

LA Noire is a fascinating game that still remains ahead of its time. Even now, six years after it was first released, we have still not seen anything on the market that is quite like this game. Although Rockstar have used the MotionScan technology in GTA V and Max Payne, it feels like LA Noire really made best use of this technology. Even though the game is far from perfect, it is still worthy of a place in everyone’s collection.

Verdict
A fantastic return to the seedy, corrupt underbelly of LA in 1947, LA Noire is one of the best crime focused games currently on the market, with unique mechanics that really add to its overall look and feel. However, poor game world graphics, clunky controls and a reliance on MotionScan technology sometimes makes it feel a bit empty.
8
Cultured Vultures is a pop culture website established in 2013 covering all things gaming, movies, and more. We eat your words.
All The News On The Biggest Games