We're Keena on this game. Mostly. 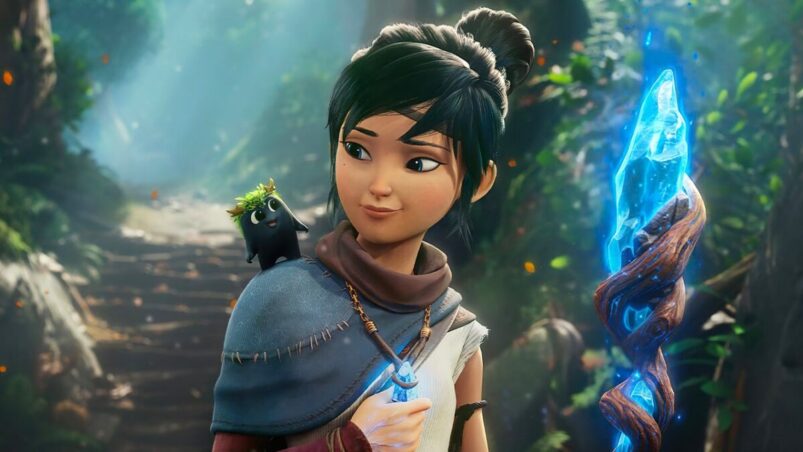 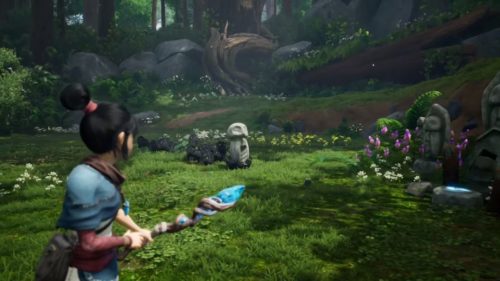 Kena: Bridge of Spirits is the first video game from Ember Lab and they’ve certainly made one hell of an impression. From the instant the game was unveiled last summer, it immediately garnered comparisons to works like Avatar: The Last Airbender and Legend of Korra just based on its aesthetic and promise of a magical adventure heavily inspired by East Asian cultures.

Considering that giving players what was advertised hasn’t been the standard as it should, the game is already off on the right foot for being exactly what was expected. Even so, there’s both a little bit less and a little bit more to the game than some were hoping – myself included.

What I expected was the beauty as advertised, as well as a plot to match. This was given, as the game follows Kena in the footsteps of her family as a Spirit Guide whose job is to assist those souls trapped in the earthly realm to the other side. This psychopomp sort of objective is always ripe for some tear-jerking, which the game certainly does with its story of trying to assist a trio of spirits who are having trouble leaving the mortal realm because they can’t forgive themselves.

The aesthetic that was promised is also gloriously followed up on, as the game’s Pixar or Dreamworks-esque graphics and designs fit superbly with the Japanese, Vietnamese, and Balinese inspired environments and iconography. The gorgeous soundtrack is also full of these inspirations.

Because of these vibes, as well as a core theme being the restoration of nature, the game almost feels something like a spiritual successor to Okami. Reminding me of one of my favorite games of all time is certainly a plus.

Speaking of reminding me of great games of yesteryear, the gameplay itself seems to be a love letter to the 3D action platformers that I and so many others grew up on like Banjo-Kazooie, Ratchet & Clank, and Legend of Zelda. The fact that masks are a crucial plot device and that Ember Lab has previously animated a fan film about LoZ: Majora’s Mask probably gives away any mystique about where their inspirations come from.

While I was prepared for Bridge of Spirits to have some measure of whimsy and charm, I was caught off guard by just how much of it the game has. Whether it’s every cool new power-up for Kena, every time you have to peer through someone’s mask to see their world, or clean up an entire area of the vile energy stifling it, there is magic and whimsy everywhere you turn in the game.

This charm, however, may cause you to overdose thanks to the game’s cute little mascots, the Rot. The Rot are the adorable little black fuzzy creatures that follow Kena around and look like someone took hairy potatoes, Pikmin, and mixed them together with the Studio Ghibli soot sprites. Every single one you collect follows you everywhere and can be interacted with.

And no, there isn’t some number of them on the screen at one time alongside you to represent them all – they all literally get to be there and follow you like the cutest scuttle shadow to ever exist. They’re also not just there to be cute – they can help you out in the world and are a crucial part of not just solving the game’s puzzles, but also being able to restore the land in any way is only possible because of them.

Add to that, one of the game’s collectables are hats to be worn by the Rot sprites. They are purely cosmetic, though it should be noted that despite being someone who is greatly annoyed at purely aesthetic clothing in games, I made it a mission to collect every single hat possible to put on my potato baby heads. To maximize the cuteness factor, all the Rot can wear the hats individually and not as one mass all wearing the same outfit.

So, the game is exactly what it was advertised to be, has great designs, amazing art, sickeningly adorable mascots, gorgeous soundtrack, and a narrative that is designed to tug at the heartstrings with a valiant message about forgiving ourselves and moving on. Hell, it even has solid voice acting and a non-intrusive combat system to boot. Where could any flaws hide? For all the effort the game makes to feel so full, there are a surprising number of things that just make the game feel so empty and that, disappointingly, starts with Kena herself.

Some of the only depth to her character we get, especially in the early goings, is that her father was also a Spirit Guide. We get no other real goals or personality from Kena other than she’s great with kids, the Rot seem to love her, and she wants to get to the Mountain Shrine. Apart from that, she seems to completely identify with her job and nothing else.

This isn’t to say Kena isn’t an endearing character – she certainly is. It’s really hard to want to follow a character whose thing is restoring balance to the world if they’re not kind and friendly. But she just seems to be, I don’t know, a nothing puppet. You can control her and she gives the player the function to interact with the world, but despite her wonderful outer design, she’s not much more than the shape of an engaging, driving protagonist with nothing satisfying to fill it.

I guess it’s not the worst thing considering the game focuses more on gameplay and environment over characters. But everything else in Bridge of Spirits makes me want to know more about her all the time, making it much harder to look past than with someone like, say, Link or Amaterasu (who both can also use the excuse of, depending on the game, having lost their memories).

Despite the focus on the aforementioned gameplay, that can feel pretty empty as well. Outside the platform puzzles which are fun but maybe too simple for some, the only real thing to do in the game is to collect things. Again, you can see the nugget of inspiration from past 3D platformers, some of which were nothing but collect-a-thons, but since this game is much smaller and has less in it – the game is between 10 to 15 hours long – it makes the collecting stick out like a sore thumb. Hat and Rot collecting are fun, but trying to find everything feels less enjoyable and more like tedious filler.

This is highlighted when, in order to advance in your Spirit Guide journey, you have to track down three specific memories attached to each spirit to help them along. This also wouldn’t stick out so badly if Kena herself didn’t just seem to know this complicated extra step without anyone telling her, despite the fact that the game establishes that it isn’t normal. Perhaps Kena does know more than we’re led to believe, but because of the lack of focus on Kena herself, we never know. That sort of thing seems to happen frequently in the game, with magical events just kind of occurring without a lot of explanation.

Jumping off of that, while the narrative has some legs and a great message, the actual story itself is, again, disappointingly lacking. Though you can clearly see the pieces they were playing with in trying to construct a powerful narrative, it all falls a bit flat when key emotional moments are broken up constantly by the game forcing you to go collect more things in order to progress.

All that said, the game is still a real treat. Not every game needs to be a sprawling open world epic and despite its tedium at times, the game is full of enough charm and magic to make up for it most of the time. After the absolutely hellish past eighteen months or so, there are few things more cathartic than getting lost in worlds all about the healing power of moving on. Not bad for a studio’s first time game at all. 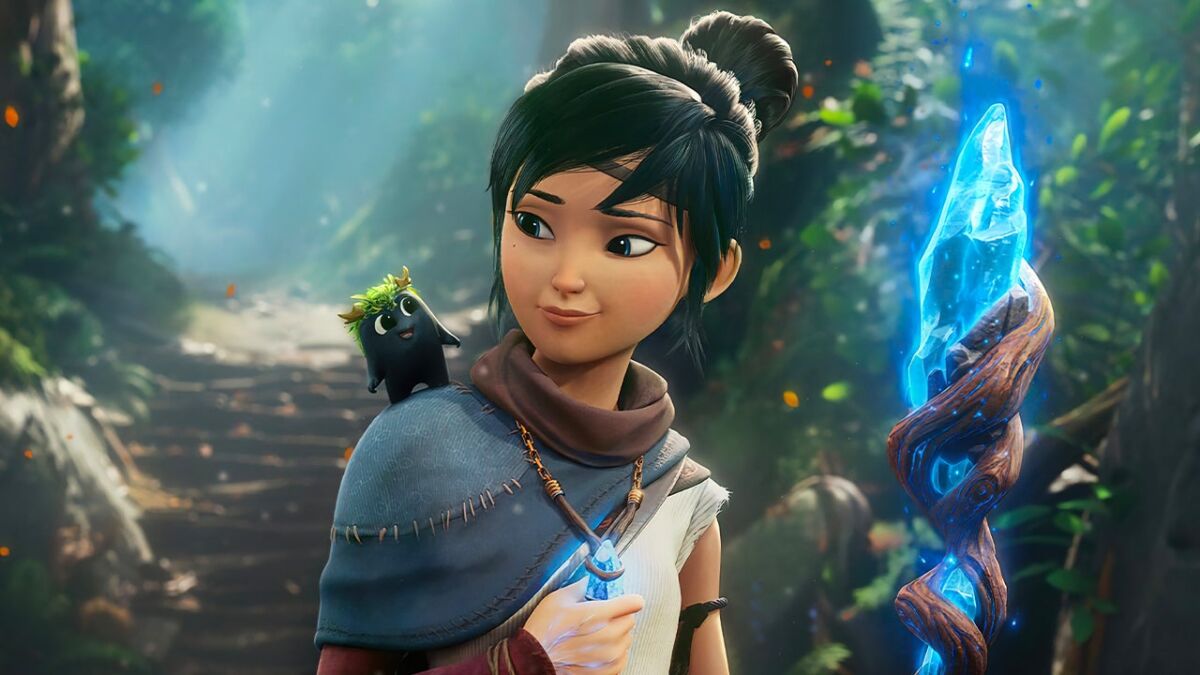 Verdict
Kena: Bridge of Spirits grounds itself on relaxation, healing, and cuteness, getting us to reflect and meditate on the beauty in the world when there is darkness abound. While lacking in several narrative areas, the gameplay and overall peaceful vibe of the title keep it engaging and enjoyable.
8
Cultured Vultures is a pop culture website established in 2013 covering all things gaming, movies, and more. We eat your words.
All The News On The Biggest Games