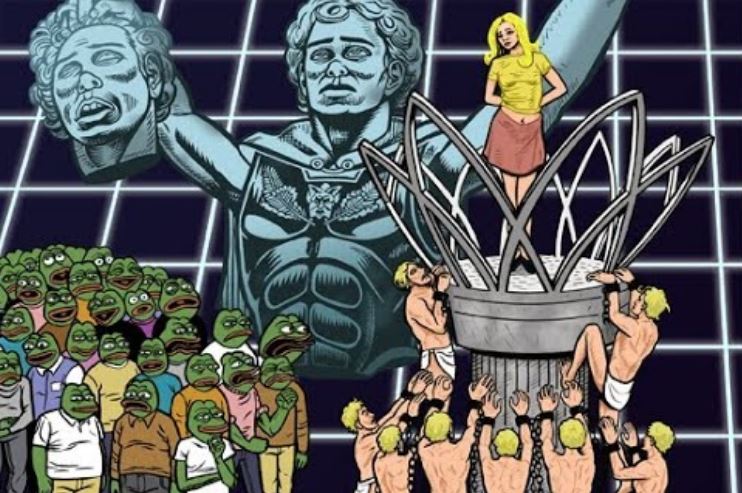 Noam Metzenbaum is a dorky, Jewish 15-year-old boy who believes he’s destined for great things. Even though he’s bullied and rejected by his peers, he believes that he’s descended from aristocrats. He believes he’ll eventually rule the world and punish them all. He spends every day writing about his greatness and revenge fantasies in his journal.

He eventually convinces his mother to transfer him from his inner-city high school to the prestigious Chadsworth Academy. But even there, he’s bullied by the most popular jocks in the school, known as the Chads, who torment him and humiliate him in front of his crush, the rich, blonde, Jewish girl Natalie Bloom. While trying to protect Natalie from the aggressive Chads, he commits an act of violence that he eventually discovers has further reaching consequences than he ever could have imagined.

“Noam decides to pour his guts out. He writes about his years of loneliness, how he was not accepted by the rich kids uptown, and was bullied by the ghetto thugs at his high school. How he will prove to the world how great he is, that he has the best taste in culture, highest philosophical ideas, and grandest aesthetic visions, and how he will remake the world into a utopia for true aristocrats.”

Independent journalist and political commentator Robert Stark’s first book is difficult to describe. The best I can come up with is that it’s like a strange mixture of an Internet Age A Confederacy of Dunces and a twisted parody of coming-of-age films like Clueless, the latter of which is directly referenced in the story.

Stark takes many of the tropes of teen romances and takes them to comical extremes. Noam is not only a nerd, he’s full of himself and unlikable in many ways. Very much like Ignatius Reilly. One hardly finds reasons to root for him. However, his Chad bullies are just as bad, if not worse. They are endlessly tormenting him, culminating in gang raping him in the school shower. His love interest is barely there. We hardly see her outside of Noam’s rants about how they were meant for each other. She’s more an idealized abstraction to Noam than a real person to him. This becomes especially obvious in the second half of the narrative.

Noam’s bullying comes to a head when he crashes a Chad’s house party. When he discovers that they Chads are attempting to gang rape Natalie, he grabs a decorative samurai sword and murders several of them. This gets him put in jail for 16 years. He comes out to discover that he’s become a cult hero like Charles Manson or Eric Harris and Dylan Klebold. He believes that his genius is finally being recognized until he travels to the titular Vapor Island to try to find Natalie. There, he realizes the fantasies he wrote in his journals have been turned into businesses. A sleazy director there wants to tell his life story, but wants to turn it into a smut film that paints him purely as a villain. His ideals have been taken and used against him.

There are several parts of the book which satirize contemporary politics. A major character in the book, whom Noam never sees in person, is Roger Blackstone. Blackstone is an eccentric billionaire who is running for president that many, besides Noam and a few others, dismiss as a fascist loon. Trump is the first thing that comes to mind, however his ideas aren’t very Trumpian and, in fact, don’t fit in most traditional categories. He wants to encourage the widespread psychedelic usage, implement a guaranteed basic income, nationalize the banking system, and base immigration policy on attractiveness.

At one point, Noam and his classmates take part in a mock debate based on the candidates running for president. Stark doesn’t hold back in mocking the Democrat, the Republican, and the Libertarian parties. Noam tries to advocate for Blackstone, but is quickly shouted down by his bullying classmates. When Noam gets out of prison, Blackstone has become president and is implementing his promised policies. Once again, Trump comes to mind in how he ran as a third party candidate in 2000 but wasn’t elected until he ran again in 2016. Noam’s faith in Blackstone seems confirmed at first, but he soon becomes disappointed by what he finds on the Vapor Island constructed by Blackstone’s company.

Internet culture plays a major role in the book. The titular Vapor Island is a reference to the music genre of vaporwave, a genre which was born and proliferated on the internet and is sometimes dismissed as little more than a meme. The aesthetics of the island, as well as Noam’s sense of aesthetics in general, are heavily influenced from those of vaporwave art. Several other internet memes play a role in the narrative as well. “Chad” itself is an internet slang term for stereotypical jocks and here they’re played up in contrast to the virginal Noam, a popular meme in itself being exaggerating the differences between “Chads” and “virgins” to an absurd degree. The popular Pepe the Frog meme comes into play as well. In one of his dreams, Noam comes into contact with a guardian spirit named Shadilay and on Vapor Island, he meets a frog mask wearing cult who worship the ancient Egyptian god Kek. Interestingly, despite all the references to internet culture, the internet plays almost no role in the story.

My biggest complaint about the book is that the copy editing in the book does leave something to be desired. I’ve seen much worse, especially considering the book is self-published, but there’s still quite a few typos in the text. There are no chapter breaks in the book either. This isn’t a problem for the most part, but it does make it a bit jarring when the narrative jumps ahead 16 years. A break there would have been welcome.