Still the standard for music in film. 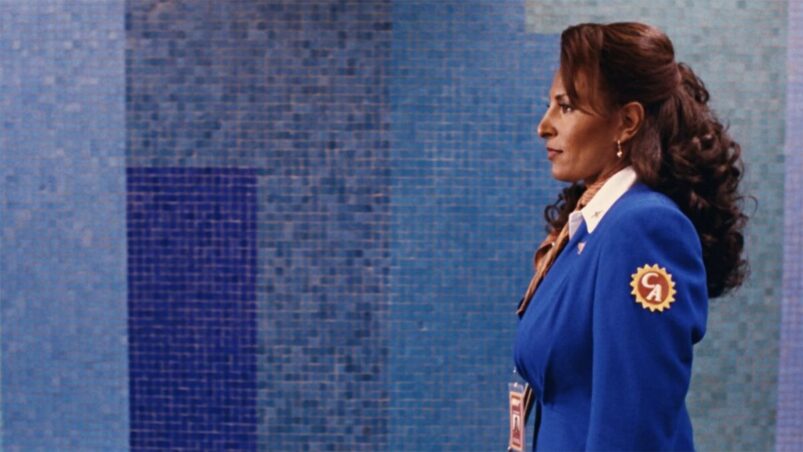 The marriage between song and scene is a delicate one. Inserting the wrong tune at the wrong time can destroy an otherwise flawless sequence. Conversely, the correct audio accoutrement can emote things that actors and actions cannot. In a 2007 interview, Quentin Tarantino was asked about the importance of music in film. He said this: “If you do it right, if you use the right song, in the right scene…it’s about as cinematic a thing as you can do”. 25 years ago, Tarantino delivered this cinematic achievement in film with his underrated film Jackie Brown.

Written in 1992, Rum Punch is a stylish crime caper by literary legend Elmore Leonard. The book features a slew of plot twists along with a stable of twisted characters. In 1997, Tarantino brought Rum Punch to the big screen and renamed it Jackie Brown. The film boasts an impressive cast that includes Pam Grier in the title role, as well as Samuel L. Jackson, Michael Keaton, and Robert De Niro. It tells the story of an airline stewardess (Grier) who smuggles money for a sadistic gun dealer (Jackson).

When Jackie is busted by the Bureau of Alcohol, Tobacco, Firearms and Explosives (ATF), she is forced to work with law enforcement to bring down her merciless boss. At the same time, she concocts a scheme to play both sides against the middle and escape with her freedom and a large sum of money. It’s a good plan and it just might work, if she can stay alive.

Although the source material is from Leonard’s novel, Tarantino puts his unmistakable imprint on the material. Music is his most potent weapon in accomplishing this, renowned for his superb utilization of diegetic sound (music implemented into the scene itself). This technique lets the audience hear the music as the players would hear it. By including the viewer in the same auditory experience, this allows the viewer to occupy the same space as the character. The film’s diverse diegetic soundtrack includes artists such as The Delfonics, The Supremes, The Grass Roots, Minnie Riperton, Foxy Brown, and Pam Grier herself.

Two powerful examples of Tarantino’s mastery of diegetic sound in Jackie Brown occur with the same character in the same setting. On separate occasions, Jackson’s character is behind the wheel of a car. Both instances see him preparing to commit murder. In the first scene, the character inserts a tape into the deck and we hear “Strawberry Letter 23” by funk band The Brothers Johnson. The second has Jackson sitting in the dark listening to Johnny Cash sing “Tennessee Stud”. The character, the motivation, and the setting are the same, but the songs are very different, which indicates a tonal shift. Needless to say, one murder attempt is successful, and one does not go as planned. Also, since the music is a part of the scene, the audience has just shared an auditory experience with the villain. This serves to once again increase viewer commitment.

If Jackie Brown has a theme song, it is “Across 110th Street” by Bobby Womack. This musical choice is a clear nod to the Blaxploitation genre that Tarantino is so enamored with, and a genre Pam Grier prominently starred in. Quentin uses the 1972 soul ballad as a form of narrative progression, but it’s also a participant in the narrative. The film’s opening sequence shows Jackie in profile on an electronic walkway at the airport. Womack’s vocals ooze out over the scene as the credits roll and the audience is introduced to the heroine. This is an example of non-diegetic music because it exists outside of the scene. It also perfectly sets the mood for the picture.

In the final scene of the film, audiences see Jackie driving a car when once again “Across 110th Street” begins to play. The viewer assumes the song is acting as background music like the previous use, until Jackie starts to mouth the words. This is diegetic implementation. At this point, the audience is in the car with Jackie because they are hearing what she hears. By using the same song at two separate points in the film in different ways, Tarantino not only creates a sense of continuity, but he also further reinforces viewer connection.

Jackie Brown is routinely underappreciated and overlooked. A major reason why is because people constantly compare it to Pulp Fiction, the more successful and well-known Tarantino movie. However, cinema scholar Jason Bailey commented that “Jackie Brown may be the only Quentin Tarantino movie that gets noticeably better with each viewing”. With the benefit of 25 years of hindsight, Jackie Brown prevails as the superior film in several areas including pace and sentiment. But the most glaring difference is the use of music. Pulp Fiction is a film full of brilliantly executed musical sequences, but Jackie Brown is a film brilliantly orchestrated to music.

READ NEXT: Make the Case: 7 of the Best Neo-Noir Movies