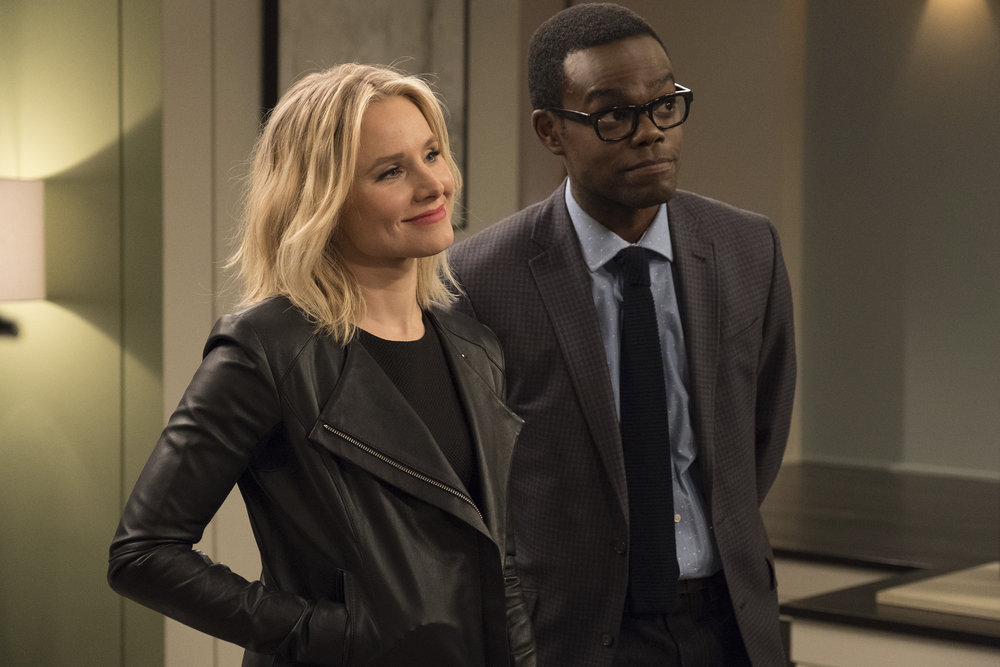 William Jackson Harper spoke with Cultured Vultures over the weekend in advance of tonight’s hourlong season 2 premiere of The Good Place on NBC at 10 PM ET/PT.

Thanks for joining Cultured Vultures today. How are things treating you?
I’m doing good. Very good.

Season 2 of The Good Place premieres on Wednesday night after a very long wait following the season finale’s twist. What should fans be looking forward to seeing this year?
After that finale, we’re in an interesting narrative spot where the audience knows more than the characters in a really fun way. I think you can look forward to a lot more crazy. The show’s going to get weirder and weirder from now on. There’s not any world-building left to do. We jump right into all the fun stuff.

What was it that attracted you to the role of Chidi and what do you bring to the character that wasn’t in the script?
It’s so funny when I get asked why I was attracted to any part other than the fact that I’m hoping to be paid and have a job. But beyond that, I honestly was—I mean, I love the character from the get. The fact that I get to play it at all is huge form of luck in my life.

I think maybe the thing that I hope to bring to it at least is myself. There are a lot of things that are Chidi that are very close to who I am but I think that as an actor, you can’t help just kind of like where a part fits in your regular life. I hope that the part fits me pretty well. I feel like I just sort of live in the character.

Could you be an ethics professor in real life?
Absolutely not! I don’t think I’m nearly as fun as Chidi is. At least I’m that way. I think I’ve tried to read some of the ethics that gets mentioned in the show. Even in some articles that sort of give tips for great books or give you really some great ideas. I can’t get close around reading those sometimes. I definitely would not be an ethics professor.

What is it like working with this amazing group of people?
At first, it was, to be honest, it was really intimidating. I was afraid they were going to find me out and kick me off the show. (Laughs) They’re going to find out it’s all a mistake and someone else is supposed to get this part—not me. So I spent a good six or seven episodes in the first season just trying not to throw up. But then like everyone’s so sweet. Ted is a national treasure. Kristen is like the most outgoing person I’ve worked with ever. Darcy, Jameela, and Manny—I can’t imagine working with a better group that I love more.

How much improv is there on the show?
Honestly, not a lot. The world is so tightly constructed that we really need to stick to the narrative. Otherwise, we could wind us in different directions opening up a whole can of worms that we don’t need to be opening. The world is so meticulously planned that each episode very much depends on the previous episode for it make sense. We don’t do a ton of it. There are some guest stars that get to do some fun stuff here and there. They get to kind of go off and have a little more fun with that sort of thing. For the six of us that have to sort of carry this narrative weight for the most part, we tend to keep close to the script pretty much all the time.

The show’s way of working around the swearing is really interesting. Has that found a way into your regular everyday life?
Actually, no. I have a potty mouth. I’m cleaning it up very constantly for you right now. I live in New York so I drop F bombs like it’s my job. It’s—no, not at all. I stop by the trailer as soon as I leave and I leave all the time in between takes.

You had a role in Paterson earlier this year with Adam Driver, who many of us know from Girls and most recently as Kylo Ren in Star Wars. Have you been able to get any scoop from him for the new Star Wars film?
Nothing. No. Of course, not. There’s nothing that anyone would give up on that. I honestly don’t even want to know though because I would rather just be surprised by all that.

If you weren’t acting, what would you be doing?
I really don’t know. I sort of thought about this hard a couple of years ago when I was considering leaving the profession and maybe going down the education route. See if I could teach or either acting somewhere but I got the part and leaned into that a little bit more. Beyond that, I really don’t know. The thought of teaching acting was something that I shuddered at because my relationship with it for a while that I wanted nothing to do with it. I honestly don’t know that I could be happy doing it to a degree of any sort of excellence in, I really don’t know. I feel so lucky that this is working out right now.

What other projects are you working on?
I’m actually working on a play for Lincoln Center Theater here in New York called After The Blast. I actually have a movie coming out sometime in the fall called They Remained but I completed that a long time ago. The main thing I’m actually working on a play that I’ve written with another theater in New York that we’re hoping to produced soon. We’re workshopping at this point.

Thank you again for your time.
Alright, thanks a lot.