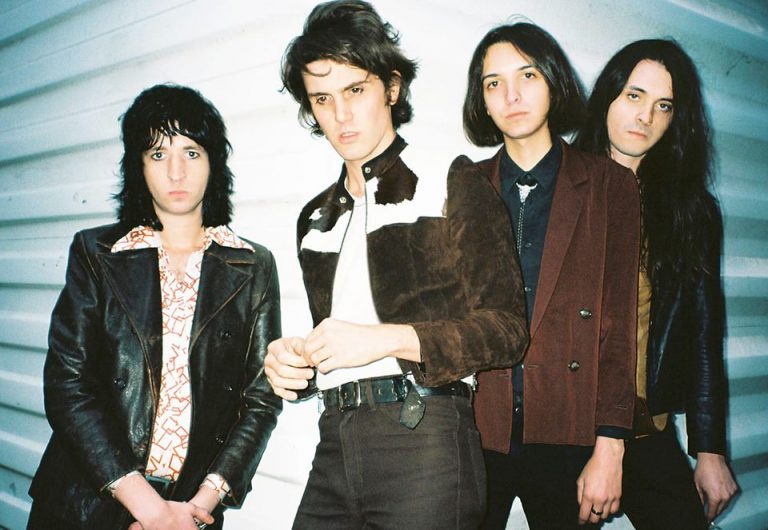 Wales’s colourful music history shames Dulux colour charts of every hue. From Shirley Bassey to Manic Street Preachers, skipping neatly over Lostprophets, the land of St. David has produced some life affirming artists. With their angular, restlessly neurotic debut Operator, Telegram have sauntered into that pantheon, all guitars blazing. It’s almost as if their two year absence never happened.

Perhaps absence isn’t the right word: after a gigging frenzy in late 2013 the boys seemingly went silent. All we had was space-rocket ‘Follow’, a song with enough energy to power the National Grid for weeks. An album that looked to be on the cusp of release never arrived. Then ‘Aeons’ and ‘Taffy Come Home’ landed in 2015, followed by Operator earlier this year. They were back, but questions around their disappearance lingered.

I caught up with frontman and axe-wielder Matt Saunders before the band played M.O.T.H Club in Hackney, east London, about lyrical influences, aggravating Temples on tour and the answer to the ancient conundrum: would you rather be a mole person or a vampire?

I first saw you supporting Temples at Brudenell Social Club in 2013, and I say this as a Temples fan, you blew them off the stage. They had their sound issues but you owned the night. What do you remember about that gig and tour?

Yeah I remember that gig. We felt like the naughty kids on the school bus taking the piss out of the older prefects or something. We had an over-excited spring in our step and were hoping to make people react to our songs like you did.

You certainly did that. What I remember from that night is the sheer force of ‘Follow’, my favourite song of yours, its motoric beat that felt like you were blasting into space. Then without warning you guys disappeared. Two years passed and I kept searching iTunes for new songs but found nothing. When you came back with ‘Taffy Come Home’ and ‘Aeons’ I couldn’t believe how different you sounded. Did the transition in sound come naturally?

It doesn’t feel different. I mean they’re poppier in their structure, but it wasn’t intentional. With ‘Taffy Come Home’ we didn’t necessarily want to release your favourite song, just something that would prick your ears up.

What happened during those two years you were away?

We went on a bunch of tours; Japan twice, Europe. We toured while there was interest and all the while were waiting for someone to say “yeah, we’ll put your stuff out”. The deal with Sony fell through so we released it ourselves. Sony promised to put out a record, they didn’t and we struggled to survive during that period. Had we not been so naïve we would’ve released the album a lot sooner.

What are your lyrical influences? That line from ‘Taffy Come Home’, ‘I am restless, I am all the pieces on the ground’ captures the record’s anxiety. It shows the feeling of words matters more than their blunt meaning. Do you think bands have a duty to address big political issues of the day? Maybe not in an explicit Clash way, but-

Yeah they should, not necessarily in a Clash-style ‘fuck the Tories’ kind of way though, we need to move away from that sort of rhetoric towards something more subtle. Leonard Cohen’s really good at that, Mark E Smith, Bowie, Bryan Ferry, Brian Eno, they go for abstraction. They have that basic sincerity with thought-provoking abstraction. It’s about attack, presentation. Various hidden references are all over the album. ‘Lady Godiva’, one of the songs on the record is about a lady who rode around naked on horseback in protest at her father’s attempt to tax his tenants. That whole story is where the term ‘peeping Tom’ comes from! There just has to be a breakaway from the stale rhetoric- you think about lyrics more if it’s not the same. ‘I am all the pieces on the ground’ is an example of that.

Interesting. You took something outside of music and incorporated it into your songs. What other art forms influence you?

High-Rise is out in cinemas, that’s a brilliant book!

Yeah and books like High-Rise, Brave New World and Slaughterhouse Five tackle politics in a different way, and I suppose that links into our space-punk sound.

Some great references there. You’ve been a true gent Matt, to round up I want to end on a few ‘serious’ questions. If you could choose any historical figure to be in your band who would you choose? They don’t have to be musical.

(leans forward, thinks deeply) I’m really stumped. There are just so many. Can I come back to you on that one?

No problem, glad to see the question’s got you thinking! Next up is a question that we struggle with on a daily basis: would you rather be a mole person or a vampire?

(a look of confusion fleetingly crosses his face) A mole person? What do you mean?

As in a Hans Moleman from The Simpsons type.

Oh, well in that case I’d be a vampire. But what about those mole people who live in the subways in New York? They’re cool, I’d like to be one of those. It’s hard not to think of Twilight when you think of vampires nowadays.

You’re one of the few people who has picked mole person. I was thinking of a Hans Moleman type but the ones living underground in New York sound equally cool. Finally, if you could ask a music journalist one question, what would it be?

(becomes more agitated and animated) Okay so I’d ask do you get angry when you see bands pigeonholed into certain genres without a full understanding of their sound, to labels that carry a lot of weight? I’d also ask do you understand the modern process of releasing an album. Only middle of the road bands are guaranteed record deals nowadays, so a band like ours has to struggle to get anywhere. It’s hard to talk about what happened with Sony without sounding bitter about it but they have to understand things have changed. Access to stuff is limited, the days when you get exposure through NME and MTV are gone. You have to use your power wisely.