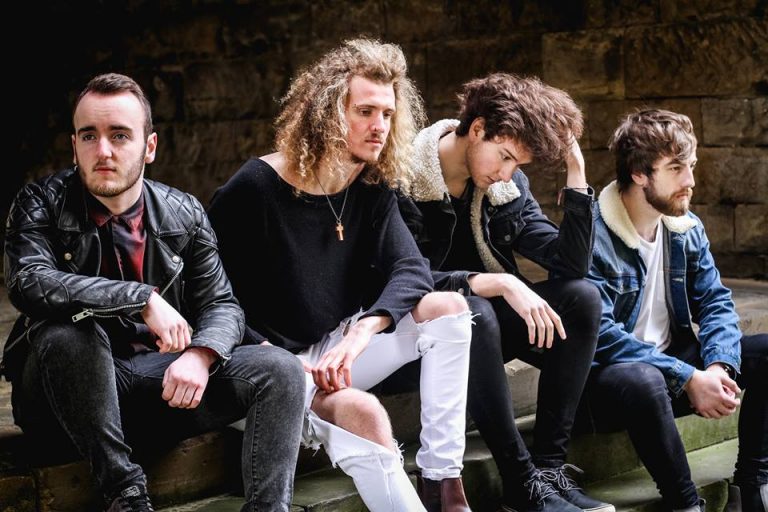 Comprised of Matt Bulmer, Adam Dixon, Samantha Thompson and Joe Condon, Lord Swans are definitely a band to watch out for, receiving national attention and airplay from BBC Radio 1 and BBC Introducing. I recently interviewed the lead singer of Lord Swans, Matt Bulmer, in order for them to tell Cultured Vultures and its readers more about their debut single, more about the band itself and their plans for the future.

Hey Matt, thanks for doing the interview today. Busy week?
Yeah it’s been really busy, we actually just finished off our EP over the weekend and yesterday, and today we’re off to record at the BBC, they’ve got a kind of live lounge thing going on so that should be good.

Lord Swans have got an incredible sound, how would you personally describe it?
I think its quite different [to other bands] but if I had to say we sounded like a certain band, I would say Biffy Clyro, Foals, Fickle Friends and Red Hot Chilli Peppers.

Who or what are your biggest influences on that sound?
My influences are Biffy Clyro, I love Biffy a lot and Adam’s influences are Fickle Friends because he loves Fickle Friends but our drummer is a proper metal head. We all like heavy music and we’re kind of obsessed with it but I don’t know what his influences are but he’s really into Foals and Slipknot. Our bassist, I think he’s very into Oasis and Red Hot Chilli Peppers, so I would say those are our influences individually.

How did the band form and how long have you been performing together?
Last September I would say and I went to college with Adam and Sam and I met Joe through his brother. So then we all kind of just got together and started making music ever since. They’re really nice people. They’re very talented as well, very talented.

Your debut single, ‘The Plan’, was just released yesterday to Spotify and iTunes and has received attention and airplay from both BBC Radio 1 and BBC Introducing. This must be exciting times for the band mustn’t it?
It is, I mean to be honest, being in a band is one of those things that is never going to work unless you have support. My mum and dad said since day one follow your dreams and that’s kind of what we’ve been doing. Our families have been really sweet and pressuring us to get real jobs but they’ve all been very supportive. It’s a dog eat dog business. It’s super competitive, it’s crazy. We’ve been very privileged with all the good feedback. It’s been nice.

How would you describe ‘The Plan’?
I would say it sounds quite Foals-esque and is a really heartfelt song because me and Adam wrote and its about sort of the struggles about being in a band, especially being in a band with not a lot of money because some bands sort of get given what they have because of the money they have or the contacts they have but we’ve had to really work straight up for everything we’ve been given. I’d say the song is aggressive indie, not too soft, not too heavy.

You’ve all clearly put a lot of effort into this song and it’s a powerful debut for the band, what was the process like in creating it?
Me and Adam wrote it, then we brought it to Joe and Sam and then they sort of put their own little spins on it. Then we took it into Blast Studios to a guy called Tom Lewis so we did two days there recording and then we brought all those files to a guy called Adam Snowden who recorded some extra parts. We went to his for a day and then he did his mix before sending it to Pete Mayer who was cue master for U2, Katy Perry and Noel Gallagher’s High Flying Birds. He’s done a great job mastering it, we decided on a release date and now here it is!

I’ve read you’re also quite active as a touring band, have you got any gigs or performances coming up that you’d like to promote?
We can’t give you a list but we have been offered a very, very big tour with a very, very big band. I can’t say who but I could probably say when. If we do get it, which I think we will, the tour will be in September, so there’s a little insider for you there.

You’ve all definitely got potential here and it would be great for more people to see you perform, any festivals in particular you would love a slot at if given the chance?
This is a good question because there are a lot of main festivals, like Glastonbury and Leeds and all that, which we would obviously love to play at because it would be perfect but there are loads of like little mini-festivals around like 110 Above Festival, Truck Festival, Great Escape and Kendal Calling, which we nearly got onto this year actually. So yeah there’s loads of festivals and if the BBC keep backing us the way they are, we would love to do Coachella and go over to the States and do that. All in good time mate.

Are you planning on the release of a larger collection of songs from the band? You said you were working on a new EP?
Yeah we’ve just finished two more songs, which are two of the best songs we’ve ever written so we’ll probably have that coming out in August/September time. We think people are really going to enjoy that. So yeah that’s our plans so far but we’re always in the studio and we’re always recording.

Lastly, is there anything you would like to say our readers at Cultured Vultures or anything else you would like to say/promote?
Thank you to everyone for being so nice to us because that’s always very kind of people. People don’t have to buy or listen to our music but it’s the people that do who make the difference with our band. I’d like to promote our social media and just the new single if that’s alright.

Yeah of course, it was nice talking to you today Matt and good luck for future. Keep us updated.
Thank you very much, have a good day.

You can check out Lord Swans on their social media featured below. Considering how quickly these up-and-comers are climbing the ladder of the music industry and working relentlessly to bring their fans new material, you’d be a fool not to.