Julio Macias talks to us about what it is to have your character become a part of you. 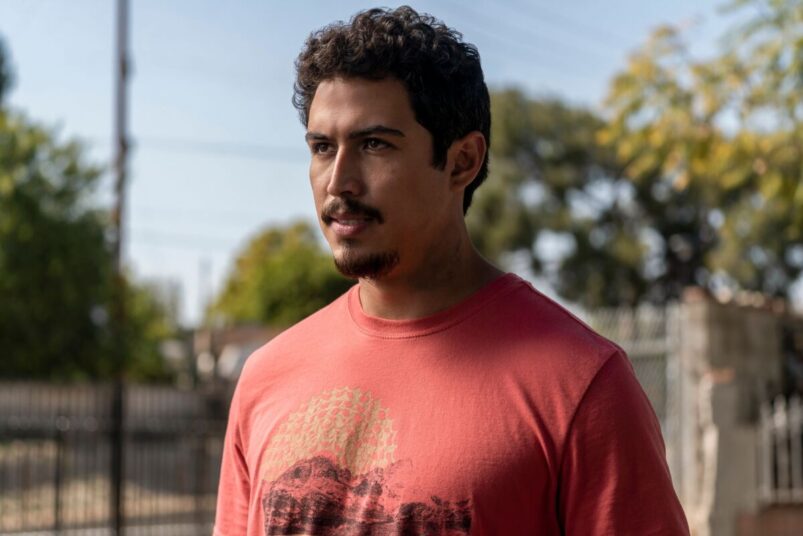 Since its first season in 2018, Netflix’s On My Block has been acclaimed by critics for its diverse lead cast, innovative stories, and genuine performances. After the release of its final season on October 4th, I sat down with Julio Macias, who plays Oscar ‘Spooky’ Diaz on the show, to talk about his character’s arc and the need for more multiracial stories.

Julio Macias has received two Imagen Award nominations for his breakout role as Spooky, and has also featured in Selena: The Series as singer-songwriter Pete Astudillo.

What was the atmosphere like on the set this final season?
Familiar. Everyone was very happy to come back on after a year of a lot of us not working because of the pandemic. It was a lot of fun to come back, but there was also familiarity. We knew what we were doing. I keep telling my castmates that Season One was an iconic season, and then we developed our characters – I feel like the performances of each character in this fourth season were by far the best. Everyone was so dialled in, everybody knew what they were doing. So yeah, it felt like coming home.

Was it also really emotional because it was the last season?
The way that we look at it is, we’re actors, so we’re moving from set to set. We’re obviously emotionally involved with these characters, but the emotional experiences that the fans watch in five hours – that’s something that we’re experiencing over a period of months. So it’s a lot slower, you have time to have conversations to say goodbye. The gravity of the situation doesn’t really hit you until the last day of filming, and then you’re like, oh, my God, this is the last time I’m gonna do this.

So what was the last thing that you actually filmed?
The very last thing that I filmed was, for sure, the most emotional thing for me in the entire series. It was me saying goodbye to Cesar when he’s doing his tie, and Oscar shows up in the background. It was very interesting because the characters and actors sort of aligned. Even though these two characters were having a conversation about saying goodbye, it was almost like Julio was saying goodbye to Diego (Tinoco).

He’s always been good, but I’d seen him go from being a relatively green actor to putting his heart and soul into the first season. He would ask me a ton of questions, and I gave him whatever advice I could, but by the fourth season, Diego was just flying. He had taught me more in four years than I ever taught him, and that final goodbye where Oscar was like ‘You’re good’, was very much Julio telling Diego, ‘You’re good. You don’t have anything to learn from me, man. You’re going to be a star.’

At the end of Season 3 you see Spooky has made some very different choices. What can you tell us about his arc in Season 4?
You know, it might not be a popular opinion, but it was a selfish move on his part. So far, he’s always been very selfless in the service of his brother. He grew up faster than he needed to because – I don’t know if they ever showed that, we actually filmed that their mom died. And dad went away and I had to go into parenting mode, and the only way of making money that I could find was the same thing that my dad was doing. It looked like the best way to look out for my brother was to transform this sweet intelligent kid Oscar into this character, Spooky. We see him commit certain crimes, all things where people were like, ‘how could he do that, that jerk, get out’, without understanding his circumstances. It’s a twisted logic, but he was doing everything he was doing for Cesar.

Then Oscar decides he needs to get out of there, and he wants to bring his brother along, but he refuses, again, for understandable reasons. Diego wrote this awesome thing on Instagram to fans complaining that Cesar wasn’t the same. It’s like, think about what this kid has gone through, of course he’s not the same! He’s gone through so much that he’s not going to just take his brother’s word. His brother has been teaching him one thing and suddenly he flips, and Cesar’s like, ‘Wait, what? That’s not what you’ve been telling me for my entire life. What do you mean you don’t need any of this? This is all I know now.’

And so the decision that Oscar makes is very selfish. He knew at some point, his actions were going to catch up with him. He was doing this for Isabel and, and the kid, but it was also a little bit of a selfish choice to even embark on that journey, because he knew it was gonna end in heartache. Life is all about taking opportunities when you can, and Oscar said, ‘I’m going to be the happiest that I can, for as long as I can’. And that’s where the journey starts and ends for the four seasons.

I noticed that while you were talking, you were switching between saying ‘Oscar’ and ‘I’. What was it like to leave behind this character?
I really do owe that character everything – the current status of my career, my personal life, my relationship with my castmates, my friends. It helped in proving myself, even to my family. They’d seen me on TV before on commercials or producing music videos but it wasn’t until Oscar they were like, ‘oh, so you’re going to be an actor!’ And I would be like, ‘that’s what I’ve been saying guys!’ So yeah, Oscar changed my life immensely.

At the same time, in trying to embody him as truthfully as I could, I noticed that that often spilled over into my life in a kind of toxic way. I’m generally a very nice guy, I see both sides of a situation. Oscar, on the other hand, doesn’t ask – Oscar takes. It was in service of the character, and everyone liked the intensity with which I would play him. At the same time, I had to learn to do this in a healthier way, and I thought, I can’t keep doing this to myself. If I book another role – am I going to also lose myself in whatever that character might be? Am I going to lose sight of who Julio is?

I’m never going to forget him, and I’m always gonna hold him close and thank him for everything that he’s done for me and taught me, but now that he’s actually gone, I feel like a weight has been lifted off my shoulders. And I think, ‘Cool, now I can just honour you, without having to carry you.’

It was announced that there is a prequel series coming to Netflix, titled Freeridge. What can you tell us about it? Do you think we’ll have any returning characters or overlap?
I think On My Block was kind of an homage to (showrunner) Eddie Gonzalez , the kind of life he grew up around and knew. But communities change and evolve and gentrify and expand. I really don’t know anything about the new show, but I think it would be kind of cool to see how they’re tackling the streets in the cities now. What happens if they’re not as dangerous? Do these kids have more freedom? Or do they feel like they maybe there’s part of their culture and community that has been lost? I’m looking forward to it, and if it’s the same writer, it’s gonna be a lot of fun.

In another interview, you said that you wished shows like On My Block had a longer shelf life. Do you think there’s a particular reason why they don’t?
That’s kind of a loaded question. I think that the first answer, without touching race or anything like that is – streaming is dominating the world right now. People binge things really quickly and then get over it. On My Block was a show that could have lasted four or five months, throughout the year. Now people watch it on the first day, and then it’s done. People that aren’t creatives but are paying the bills look at the bottom line and say, well, the show’s done, move on to the next show, we need to keep the dollar bills rolling. So that’s one reason why I think just shows in general aren’t lasting more than three, four, or five seasons across the board.

Now, when it comes to black and brown shows and why they’re not given the same opportunities, I think that there’s still a little sense of ‘I’m going to trust a lazy white show’ because it’s white, and it’s safe, than give the opportunity to an innovative black and brown show. I hate to speak in these terms because it makes it seem like white people in general are bad, and that’s just not the case. But there is a sense of comfort, because for decades, the movie stars of the world and the productions were predominantly white, and that’s what a lot of people are attracted to. And when they think of black or brown shows or the same thing within the Latino community, they’re thinking, ‘ah, it’s probably cheap. It’s probably not as good. They probably can’t afford Scarlett Johansson, so it’s not going to be good.’

Disney can’t even afford Scarlett Johansson.
(laughs) Exactly. But now that’s changing because of our generation, because of viewers like us, who are now asking and demanding more. I think that within 10 years, we’ll see a pretty even bar. The executives are changing, the directors, writers, and actors are changing, and the vocal need for diversity is changing. So I’m optimistic.

I’ve also noticed that a lot of shows that star mostly non-white cast – it’s great that they do this – but most of them center around Issues with a capital I. And I feel like we will really be on equal footing when one day there will be a show –
Where we don’t talk about it.

A show like Seinfeld – a show about nothing, that just happens to star non-white people.
I have had this conversation with so many writers, and I get it. Especially if you’re passionate about a certain issue, you want to speak your truth on it. One of my best friends, Hunter Peña (also on Selena) is a phenomenal writer. And anytime we try writing shows about nothing, there are so many hot topics in there, and he’s like, ‘we can’t just ignore these things!’

I’m not saying that we ignore these things, but there are already ten shows that are tackling this. Can we just have a show where the last name is Garcia, but we don’t have to mention the fact that we’re Mexican? Can we have a full episode where we don’t call back to the fact that our grandmother crossed the border in one way or another? You know, can we just be?