While still blowing everything up in the process. 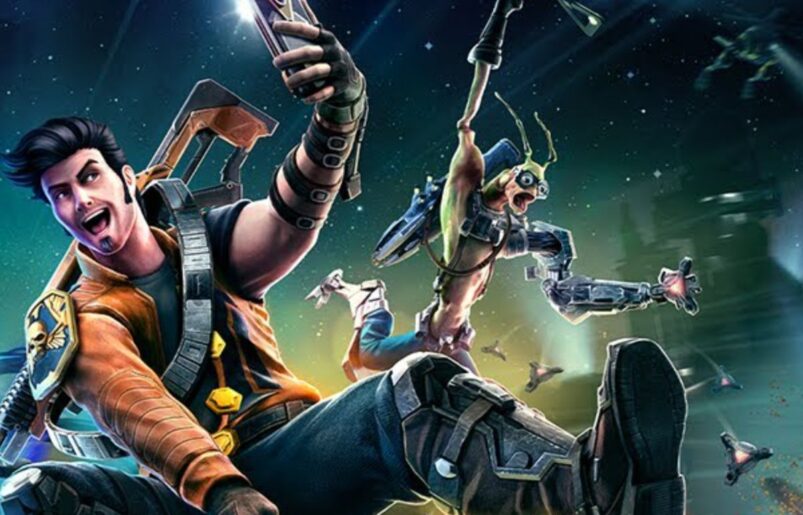 The looter shooter genre has exploded in popularity recently, but if any developer is going to create a version that’s more bombastic and explosion heavy than the rest, it’s Flying Wild Hog. The team responsible for the recent Shadow Warrior reboots, Flying Wild Hog have grown in size exponentially over the past few years with a few games lurking on the horizon, but it might be Space Punks that catches most off guard.

Launching into early access exclusively on the Epic Games Store on July 14th, Space Punks sees teams of up to four players complete levels and earn killer loot, so that they can take on harder levels, earn more loot and so on. You know how the loot game works, and Space Punks is no different, but this new attempt might just be cut from a different cloth, as FWH have partnered with Jagex, leveraging their long-term success on Runescape to try and create a game with a real long-term legacy.

During a behind closed doors press event, it was noted by the development team that there was a hungry ambition from Flying Wild Hog to learn more about the gaming industry to then expand into the multiplayer space, which is why the two began to collaborate. Jagex themselves even noted that they are excited about the idea of forging a lasting partnership.

Bartłomiej Schweiger (Bartek for short), Space Punks’ Design Lead, spoke about the collaboration in an interview, stating that the development has been moving “super smoothly”, despite the events of COVID. He added: “We’re working together, it’s been super good co-operation, especially when it comes to know-how and learning from one another, it’s super good.”

Phil Mansell, Jagex CEO, is just as excited. He said the following via a press release: “Space Punks perfectly embodies our living games philosophy by providing players with a deep, social and ever – evolving multiplayer experience. We very much look forward to using the skills and experience in building huge communities gained over 20 years of developing the RuneScape franchise to support Space Punks and future games to come under the Jagex Partners umbrella.”

Michal Szustak, Flying Wild Hog CEO & co-founder, added: “We’ve been making explosive, fast-paced action games for more than 12 years. It’s part of our DNA. With Space Punks, we continue that tradition of ours, and we are delighted to announce this new addition to our portfolio of explosive games. We are proud of what our Cracow team cooked up–a delectable mix of over-the-top, sci-fi action-RPG that’s wrapped in self-aware humor.”

Circling back to COVID, Bartek noted that Flying Wild Hog’s transition into work from home due to COVID was about as painless as you could hope for: “The last year has been hard. As far as I know, no one from the team was hit hard by the pandemic, which is very good. I think as a studio, we passed the “exam” as it were, as we were able to transition to working from home within about a week, and basically go back to business. That was a big test for us, and it was cool, let’s say, that we were able to do that.”

When asked if Flying Wild Hog would be adopting a work from home balance when COVID finally gets in the bin, Bartek adds: “The company would be more open to working from home, because it works, and for some people, it works better. Personally, I want to work more from the office, because I like working with people, and I get energy from working like that, but we will definitely be more open with working like that.”

As for the game itself, Space Punks will launch into early access with four playable characters. There’s Duke, who’s a massive braggart obsessed with fame and fortune, using commando-like abilities. Eris is the game’s melee focused character, who uses her nanobots to devastate enemies. Bob is a bug-like engineer with turrets and gadgets, while Finn is a tank with pulls and aggros enemies. Also he’s a bipedal purple hog, who uses a jetpack when he dashes.

He is the Flying Wild Hog.

As a game, Space Punks is a bit different than the likes of Shadow Warrior and the upcoming Evil West, but the recently announced Trek To Yomi is proof that the dev team has range. Space Punks solidifies that, with Bartek noting that Space Punk’s differences were a deliberate part of the reason why the game was greenlit: “Basically, we wanted to challenge ourselves. We’re very good at second-to-second gameplay and creating explosive action, but we wanted to test ourselves. Can we do metagame? Hour-to-hour? Day-to-day? Jagex were around, they have 20 years of experience and were able to do that kind of stuff.”

With the looter shooter being such a wide genre, especially with The Ascent launching later this month, Bartek still feels like Space Punks has enough to set the game apart: “I’d say we’re more action focused, but there’s a few other differences. Our first inspiration was Helldivers, but we wanted to make it more action-focused, faster and more community-based. We started there, then we added the synergies between characters, which I feel sets us apart from other games in the genre. Depending on who you’re playing with, you’ll use different skills thanks to the synergies.”

Those synergies allow players to buff the abilities of team members by having different combinations of characters, meaning it pays to play together. The only problem with that is you’ll have to split the loot with other players, and Bartek disclosed that there’s someone on the team who’s perhaps most guilty of hoarding everyone’s loot: “Probably Jarek, our gameplay designer.”

On top of the synergies, Space Punk looks to boast a highly customisable experience, with players able to craft their own gear. There’s also a huge talent tree that includes customisable mods, which should really allow players to fine tune their own skills. One of the best parts of a looter shooter is creating a build that really maximises your abilities, and it feels like Space Punks understands that clearly.

As for missions, Bartek spoke about how the game’s difficulty plays into both the mission structure and loot cycle: “Currently we have our main difficulty progression system which is akin to the one in Destiny, which will be a power level system. Other than that, you’ll have four different difficulties for what we’d call your grinding missions. The bigger the difficulty, the more loot you’d get. On top of that, there will be special game modes in the endgame that will play differently and allow you to tackle more and more difficult tasks.”

Jagex and Flying Wild Hog want to support Space Punks for years to come, with plans to introduce an open beta this winter, alongside a console launch in 2022. As for early access, there are two purchasable founder’s packs which will include a host of vanity items for the game, along with the first battle pass when that drops with the open beta. There’s also plans to introduce more story elements, alongside new characters and missions.

There’s a lot of ambition and promise when it comes to talking about Space Punks, with both Jagex and Flying Wild Hog hoping for big things from the game. Considering the developer’s previous experience at creating action-focused experiences, Space Punks is off to a good start. Hopefully, the collaboration with Jagex will be the perfect synergy between the two. Only time will tell.