Julia Quinn speaks to us about her new novel and what keeps her in the historical romance genre. 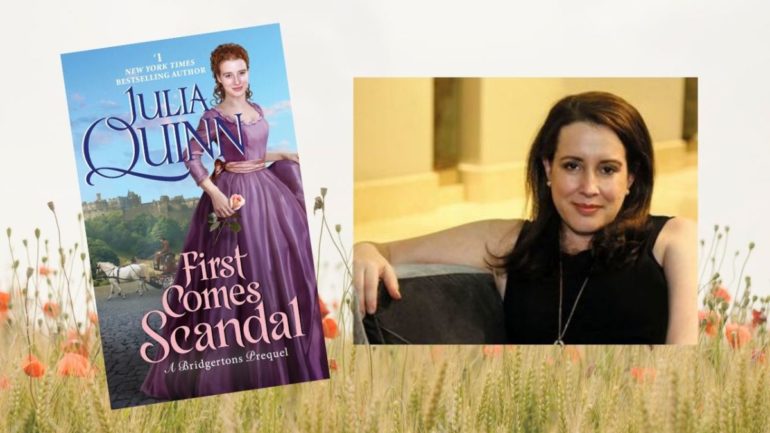 Historical romance writer Julia Quinn, author of the immensely successful Bridgerton series, which is currently being adapted to a Netflix TV show produced by Shonda Rhimes, answers our questions on her new novel First Comes Scandal, and what keeps her drawn to the world of historical romance.

Firstly, I just want to say what a big fan I am. I know you must get this all the time from interviewers, but I promise that I have read nearly all your books (I can show you my goodreads shelf as proof). Whenever I had time off from school, I would head to the library, hoping to see a book from you that I haven’t read yet. I often lingered in the ‘Q’ section, so much so that I must have cut quite the suspicious figure. That’s also how I discovered Amanda Quick.
That’s more funny than you know, because I originally chose the name Quinn as my pen name because I wanted to be near Amanda Quick. I thought her readers would like my books.

Also, congratulations on the Bridgerton series being adapted for Netflix! Was it something that had been in the works for a while, before it was confirmed in late 2019?
It was about 18 months between first contact and a public announcement. No one – especially me – realized I was that good at keeping a secret.

Since Shonda Rhimes is producing the series, if you had to choose, which of her TV shows would you choose to binge-watch?
Oh, that’s easy. I live in Seattle and I’m married to a doctor, so Grey’s Anatomy all the way.

What would make a Smythe-Smith musical performance tolerable?
Probably a great deal of alcohol. And I’m not even much of a drinker.

Do you have a favourite Bridgerton pair? (Mine is Anthony and Kate!)
I get asked various permutations of this question all the time (favorite book, favorite character, favorite couple). I could never choose. Different parts of each book and character are special to me, and sometimes this has more to do with what was happening in my life when I was writing than in the finished product.

In keeping with the title of First Comes Scandal, what’s the most scandalous book you’ve ever read?
Probably Flowers in the Attic by V.C. Andrews. I was only eleven when I read it so it was pretty scandalous.

In First Comes Scandal, Georgie mentions that toasted cheese can solve anything; what food item do you feel does the same for you?
Ice Cream. 100%.

While reading First Comes Scandal, “impugned” was a word I had never come across. What’s the strangest word you discovered in your writing?
That is a great question, and not one I’ve ever been asked. I’m going to go with contubernal, because that’s the first word in the Caroline’s “personal dictionary” in To Catch an Heiress.

Of course, now I need to (get to?) explain about the personal dictionary. When I was writing To Catch an Heiress, I was about halfway through when I realized that something wasn’t working quite right. I just didn’t know the heroine as well as I needed to. At the same time, my father had signed me up (without my permission!) for a word-a-day listserv. I was really annoyed, because frankly, I was trying to cut down on random email, but then I thought—what if my heroine was someone who loved words? Instead of a diary, I had her keep a “personal dictionary.” Each chapter opens with an interesting word, followed by the definition, and then a sentence in which Caroline uses it in context. (Relating to the story, of course.) It turned out to be just what I needed.

Incidentally, the definition of contubernal is: one who occupies the same tent; a tent-fellow, comrade. Also incidentally, Microsoft Word spell-check does not recognize contubernal.

Georgie’s smile is her most striking feature (besides her brains of course). Is this something you decide before you start writing the characters, or something that develops naturally as you write their interactions?
I do a lot of characterization in the pre-writing phase, but at that point I’m more focused on bigger things, like how a character’s history and background affect who they are at the outset of the story. Things like a smile generally develop as I go along.

Some of your romances are steamier, (like I will always recall Francesca and Michael’s romance in When He Was Wicked). But I noticed this isn’t much of a preoccupation in your newer books. Do you feel that as time goes by, you feel the need to tone down on such scenes? Or does it depend on the characters you are crafting?
It’s interesting that you would ask if I’ve felt the need to tone down the intimacy over time because when When He Was Wicked came out, there was a lot of speculation that I’d been pressured to write a book that was hotter than usual because that was what was popular at the time. In truth, it was all about the characters. The heroine of When He Was Wicked was a widow, so she was more sexually experienced at the outset of the novel than any of the other heroines I’d written. It just made sense that that book would have more sex in it.

There is quite a lot of attention paid to the colour of the sitting rooms in First Comes Scandal. What is your idea of a perfect sitting room? (Modern-day version!)
Big comfy couch! Beyond that, I’m not too picky.

Out of all the genres, why historical romance? As a follow-up to that, would you ever consider moving into the contemporary romance space?
It was what I liked to read when I started writing. It’s still what I like to read. So it’s only natural that it’s what I would gravitate to in my writing. As writing in a new subgenre, I would never say never, but I’m not a very fast writer, so if I were to write a contemporary romance it would have to be instead of historical rather than in addition to it. And I’m still having too much fun with my historicals to do that.

Now for the last question (as much as I don’t want this to end), what is your favourite line from your own pen?
I honestly don’t know, but I do know which line is most quoted by my readers. It’s from Romancing Mr. Bridgerton, and it’s become very special to me, too:

“Deep inside, she knew who she was, and that person was smart and kind and often even funny, but somehow her personality always got lost somewhere between her heart and her mouth, and she found herself saying the wrong thing or, more often, nothing at all.”