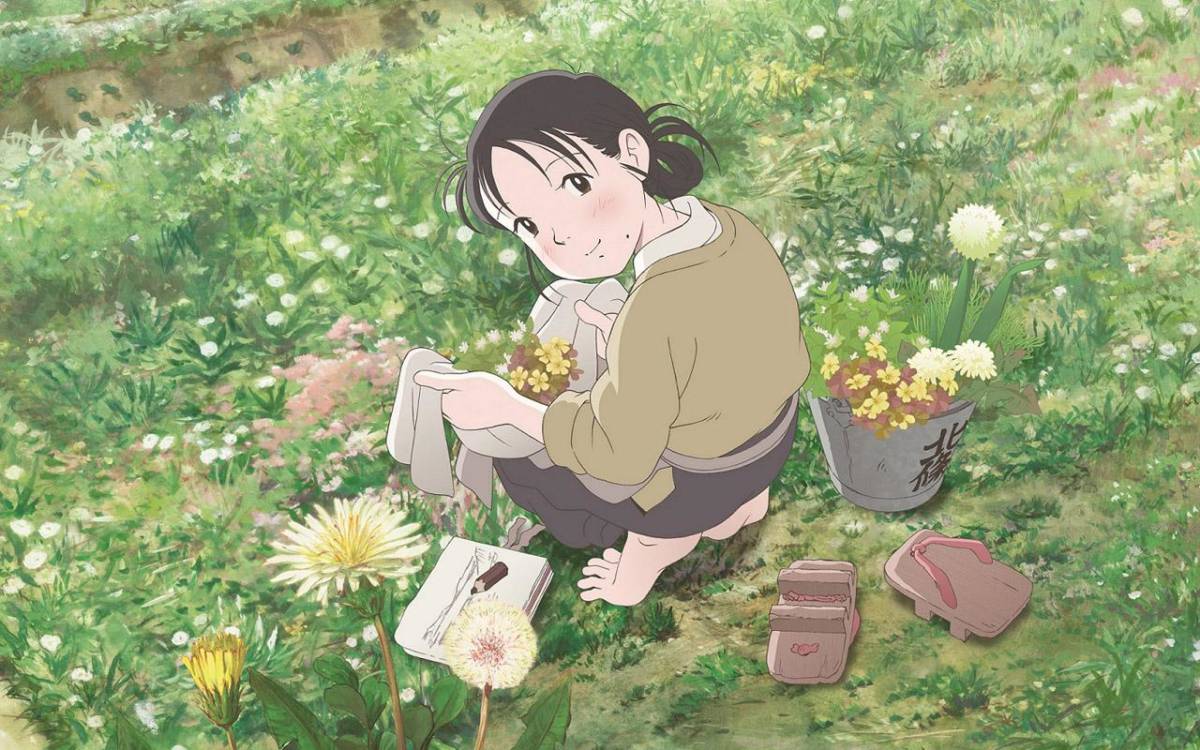 In This Corner of the World offers a soft, deeply layered World War II backdrop in a story that focuses on family, and other human relationships, in the face of devastation. Among other things, this setting reminds us consistently, albeit gently, of the consequences that are administered by men who are willing to put their country at war with another nation.

The movie is not political. It doesn’t need to be. When these decisions are made by these political men, because it almost always men who make those decisions, the consequences are not choosing a side. They are far-reaching. World War II didn’t just kill Hitler, or Nazis, or people who truly saw the hideous opportunity to shape huge portions of the globe to reflect themselves. It destroyed millions of lives that are now largely regulated to a vague understanding of collateral damage.

Is the damage necessary? Perhaps sometimes? Perhaps never? In This Corner of the World, based on a manga by Fumiyo Kouno, doesn’t answer that question overtly. Directed by the outstanding Sunao Katabuchi, the film simply shows what happens to those who are nowhere near these massive, world-changing decisions. In doing so, it forces the viewer to decide for themselves if life is truly our own, if it can be seized from us at any moment by missiles, bombs, or other instruments of profound destruction. In the end, even if you consider yourself to be wholly pragmatic, it is likely that In This Corner of the World will suspend you in thoughts of a world without war.

Simply by showing the far-reaching consequences of what happened to Japan during World War II, this movie invokes the desire on our part to imagine that we can do better. With the world currently on the brink of war once again, which is once again due to the whims of men, we are left with no choice but to relate this story to our own current circumstances. The fact that a story of war is so effortlessly timeless should be troubling to us.

At the same time, don’t think that this is merely a story of war. It is also a story of family, and particularly of the traditions and powerful personal connections that we make with others in our community. If we live in a small town or city, these connections can be even more intense, particularly when they are torn from our grip. Whether or not you are political is irrelevant. When these relationships are ripped from you, there will always be the chance of losing your arms in the process.

The film’s protagonist Suzu is not a soldier. She is not political. She lives in the town of Kure, which is located just outside of Hiroshima. When World War II begins, she is a young bride. Try as she might to live the life she expects of herself, as well as the life others expect her to live, the influence of war casts a constant glare on her surroundings. You can imagine Suzu, as well as the others who populate this expansive, soft-spoken story, looking up from their quiet lives to try and hear the bombs from hundreds, thousands of miles away. If you know your World War II history, then you also know those bombs are going to get closer. One bomb in particular, the horrifying instrument of genocide known as the atomic bomb, is going to change Suzu’s life forever.

Even as the film moves into the darker territory we expect from such a story, Katabuchi adheres to keeping the focus on humanity. Under the direst circumstances imaginable, brought on by the chaos of global conflict, people must continue on. That means trying to survive on several different levels. It means trying to rebuild, while also trying to move forward as though life hasn’t actually changed. It’s a weird state, involving a measure of mild delusion that simultaneously acknowledges the horrors of everything that is actually going on. Kouno’s manga, captured flawlessly in the film, never shirks from the impact of war on this town and its people. At the same time, it also deftly keeps much of its focus on the concepts of love, hope, survival, and family. Suzu is a believable, likable, and layered character. It is easy to find a universal connection in her suffering, and in her optimism and determination, because we hope these things exist within ourselves. The film and manga both allow us this connection, while also being able to appreciate Suzu as a fully-realized player in a drama that is much larger than this story and setting. It is obviously a drama that we are still dealing with to this very day. Even if decades have passed since the bombing of Hiroshima. Even if we now have different demons and weapons to fear, vote for, and fear again.

In This Corner of the World is a beautiful achievement for everyone involved. It is a huge win for Shout Factory, which continues to put out some of the most important, enjoyable movies and TV shows in history. Their attention to releasing contemporary stories from a potentially endless pool of sources and genres is also worth noting. Their release of this film, available as a DVD/Blu-ray combo, continues that trend. The release includes a number of extras, including a fascinating look at Kure and Hiroshima in the present, which is naturally compared to what these places were like before the bomb was dropped.

The fact that the history of Kure and Hiroshima can be divided into two distinct periods, before and after the release of the atomic bomb, is worth thinking about. Or not. Some would say war and destruction are inevitable elements of humanity and life. Maybe, but films like this leave me wondering if we are capable of doing better. We have to be. It has to be possible to stop these cycles, and to stop a story like In This Corner of the World from being able to find relevancy in virtually any given decade. If not, it will always be easy to feel a sense of modern day urgency with war stories, regardless of when they take place.

Verdict
In This Corner of the World uses its World War II story and spellbinding protagonist Suzu to create a powerful depiction of war beyond the high-stakes dramatics of the battlefield, and beyond the offices of the shitty politicians who make these decisions.
9
Cultured Vultures is a pop culture website established in 2013 covering all things gaming, movies, and more. We eat your words.
All The News On The Biggest Games