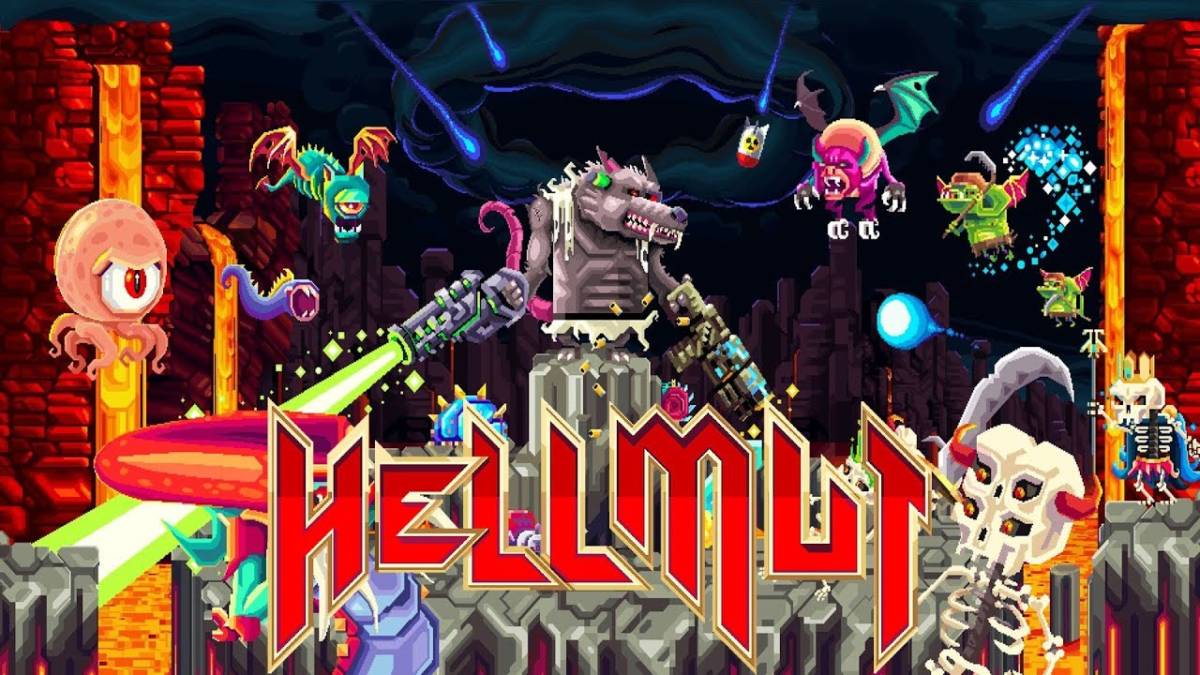 There’s nothing quite like the grind of roguelikes. There are few experiences in gaming as crushing, yet invigorating as losing all of your progress and having to start back at square one. Roguelikes thrive on their ability to throw players into procedurally generated levels and present them with hordes of enemies to tear through. The added terror of permadeath and guarantee that no two playthroughs will be alike continually floating in the back of their mind. The most satisfying roguelikes are the ones that, despite their damning difficulty, provide players unique tools to overcome these obstacles.

In this regard, Hellmut: The Badass From Hell scratches this itch in spades.

Developed by Volcanicc studios, Hellmut is a twin-stick dungeon crawler shooter for PC with an aesthetic that could best be described as Doom’s hellish demon world with a dash of Adult Swim-esque humor. Hellmut’s premise is a mad scientist attempting to harness the powers of Hell only to be betrayed by these demonic forces. After his corpse is discovered and resurrected by a creature known as Ka-Ra, the player is given the ability to body swap at their discretion with various mutations. 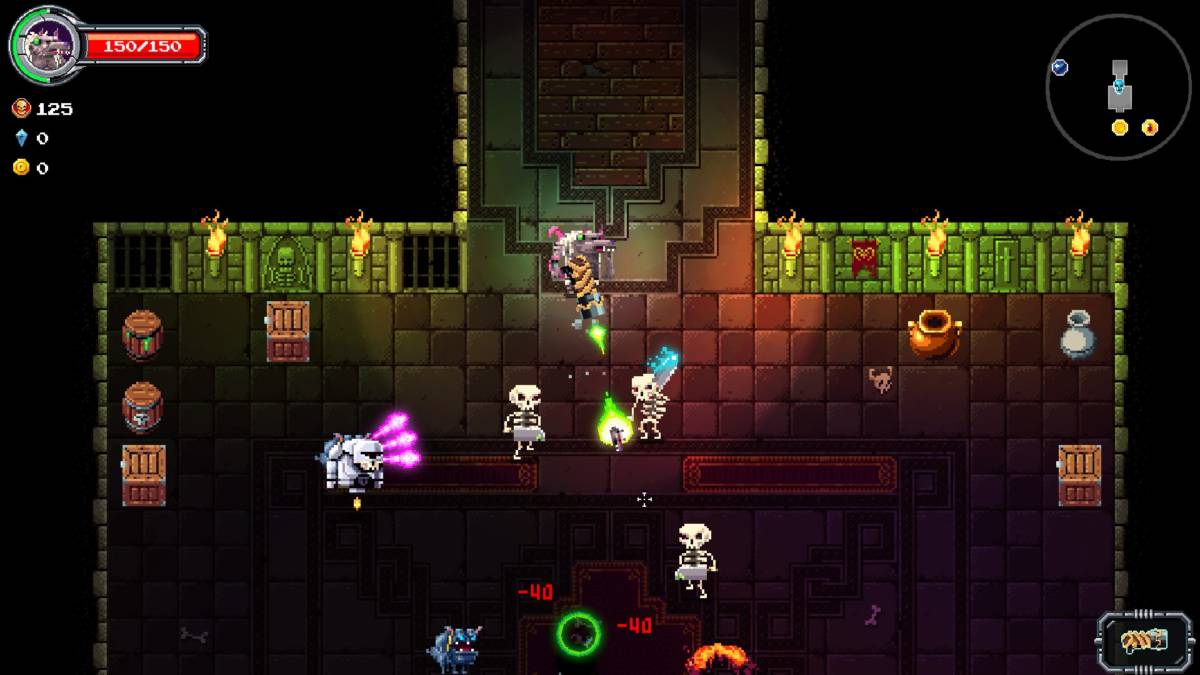 Also, his name is now Hellmut.

Mutations not only differentiates Hellmut’s gameplay from other dungeon crawlers, but they also breathe life into what otherwise would have been mundane. Had Hellmut not featured this unique mechanic, and relied solely on the standard array of firearms such as shotguns, rocket launchers, and plasma rifles, Hellmut would be fairly unremarkable. Mutations serve as hero classes that are earned from completing timed challenges where the player kills a set number of enemies. Each mutation has unique abilities providing the player with several ways to approach combat. Mutations such as The Stitcher Monster, a hulking hammer-wielding amalgamation of meat, has above average health but his standard attack range and damage output is limited. Another mutation like Rat King, a –you guessed it– literal King of Rats, has less health but brandishes a devastating rocket launcher.

No one mutation plays, or controls, like the last given their unique destructive special attacks. These attacks and abilities will undoubtedly result in players gravitating towards specific mutations over others. Mutations add another layer of strategy to combat which otherwise would have felt very flat and mundane. In addition, the player will stumble upon more traditional guns such as shotguns, rocket launchers, and plasma weapons that can help in a pinch. 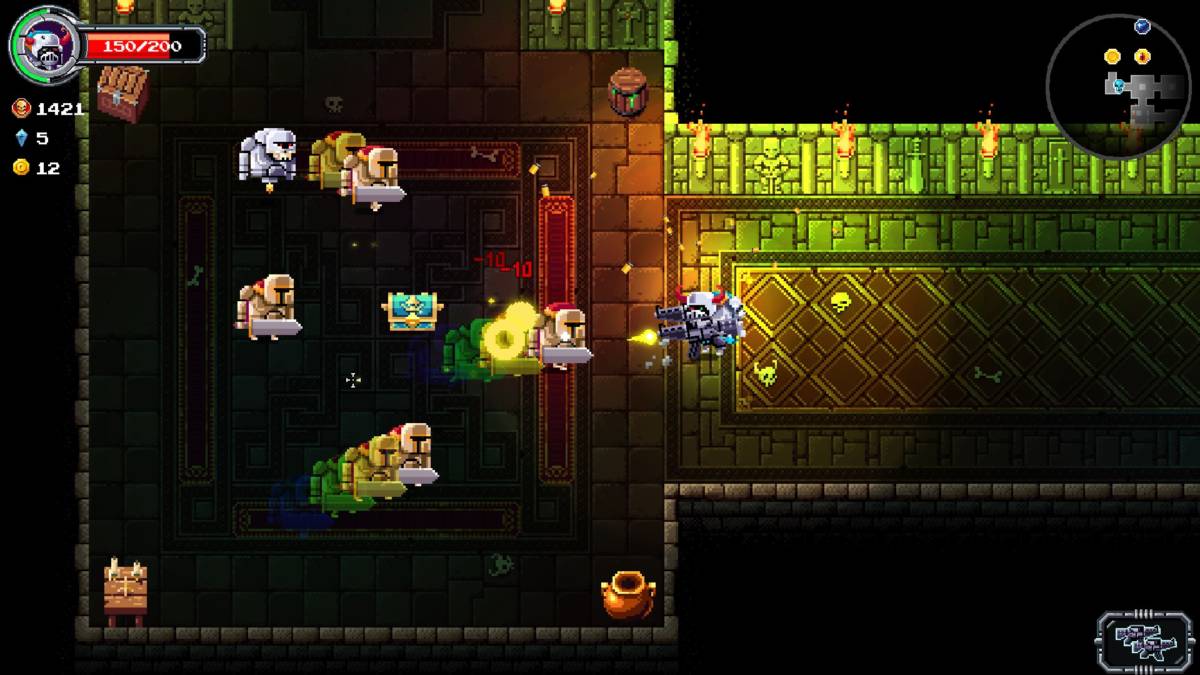 In addition to providing unique ways to chew through the hordes of hell, mutations serve as extra lives for the player. When the player’s current mutation dies, they will swap to any others they’ve unlocked in that life. Neglecting to collect additional mutations puts the player at a significant disadvantage in making it to the final boss. As if that wasn’t hard enough.

Well, sometimes it is.

Hellmut’s difficulty has the potential to spike drastically. I have had dungeon crawls where I breezed past levels and faced manageable bosses. On the other hand, I have had runs where I could barely get to the first boss given the types of enemies I was always facing. Sometimes I would come across rooms full of enemies that filled the screen with projectiles. And sometimes I would come across slow, melee focused enemies. 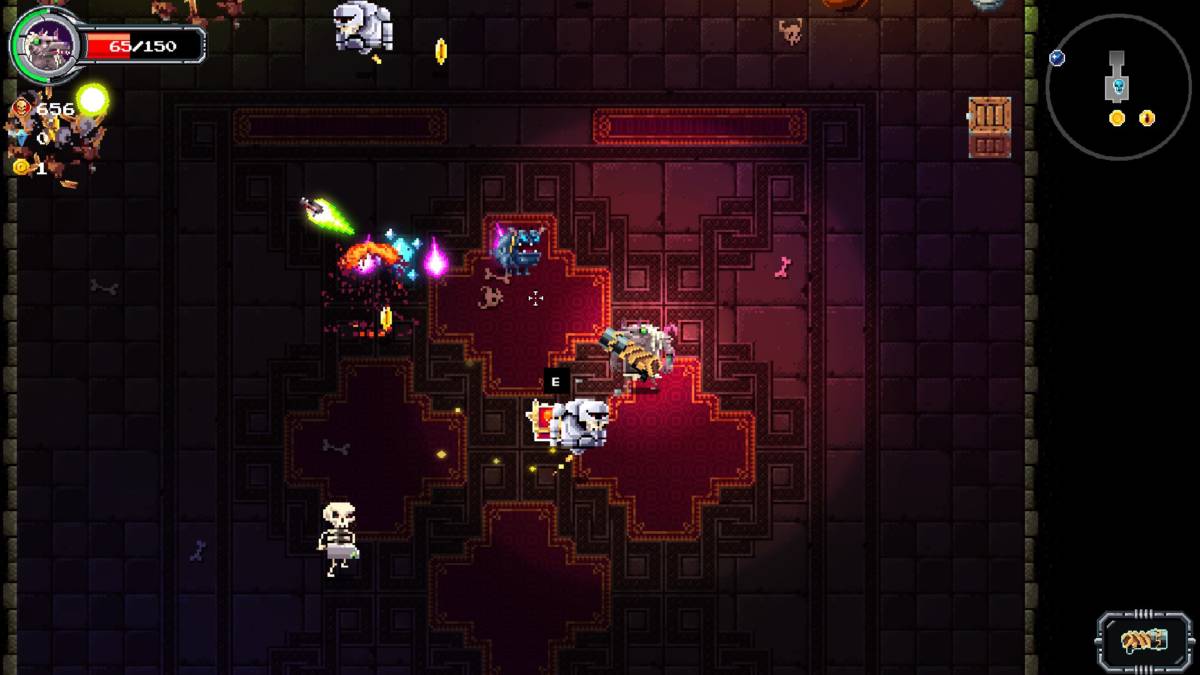 The vast majority of my deaths were a result of boss fights, and to be fair, this should be the case with most games, right? Boss fights are supposed to be a culmination of the player’s skill and abilities up until this point. I’m not knocking Hellmut for being difficult, and to be honest; it would be a pretty poor roguelike if it didn’t have challenging as hell enemies. But I did find myself caught off guard at times at just how drastically the difficulty can shift almost without warning.

Unfortunately, there were two instances where I encountered a game breaking bug, which resulted in my having to abandon my current game. Once, before the final boss, I found myself unable to activate a portal, which stranded me in a previously cleared environment. This also occurred after completing a challenge room, and prevented me from accepting my reward or returning to the dungeon. This was not only an annoyance but given the difficulty spikes, having a run that seems manageable just to have it ruined by a game-ending bug was a nuisance.

Typically, a game-ending bug would result in my being hard pressed to recommend that game. But given Hellmut’s hardcore permadeath nature and its relatively short arcade length (9 randomized levels with 4 boss fights), restarting occurs so frequently that it never deterred me from beginning another dungeon. Granted, had Hellmut’s gameplay not been so satisfying I would probably not have gone back and completed the game four times. The potential thrill of vaporizing skeleton priests with Rat King’s rocket launcher, or obliterating crowds of mutant freaks with Stitcher Monster’s special attack outweighed my minute worry of encountering a bug, or difficulty spike. Hellmut provides a level of fast-paced combat that offers staggering odds, yet gives the player equally staggering weapons and tools to overcome them. I found myself incapable of not returning to its dungeon.

Hellmut: The Badass from hell has a lot of heart. There’s a unique sense of humor in both its character design and in-game text. It’s 16-bit Hell world aesthetic and soundtrack give it the attitude of a game where the protagonist is named “Hellmut” should have. There were times I found myself annoyed by its infrequent, but crippling bugs, or its sudden difficulty spikes. Neither of these stopped me from booting up countless dungeon crawls in an attempt to make it to the final boss. It’s fast paced, run and gun gameplay, paired with bizarrely weird, but devastatingly powerful mutations gave Hellmut the edge it needed to avoid being just another twin-stick shooter. A commendable feat for an indie developer publishing a game in a genre that often feel oversaturated with shallow clones of one another. Dumb, hellish fun.

Verdict
Despite a relatively standard roguelike dungeon crawler framework, Hellmut’s mutation swapping madness gives this twin-stick shooter a breath of originality and satisfying destruction that separates it from the competition. Microtransactions: none
8