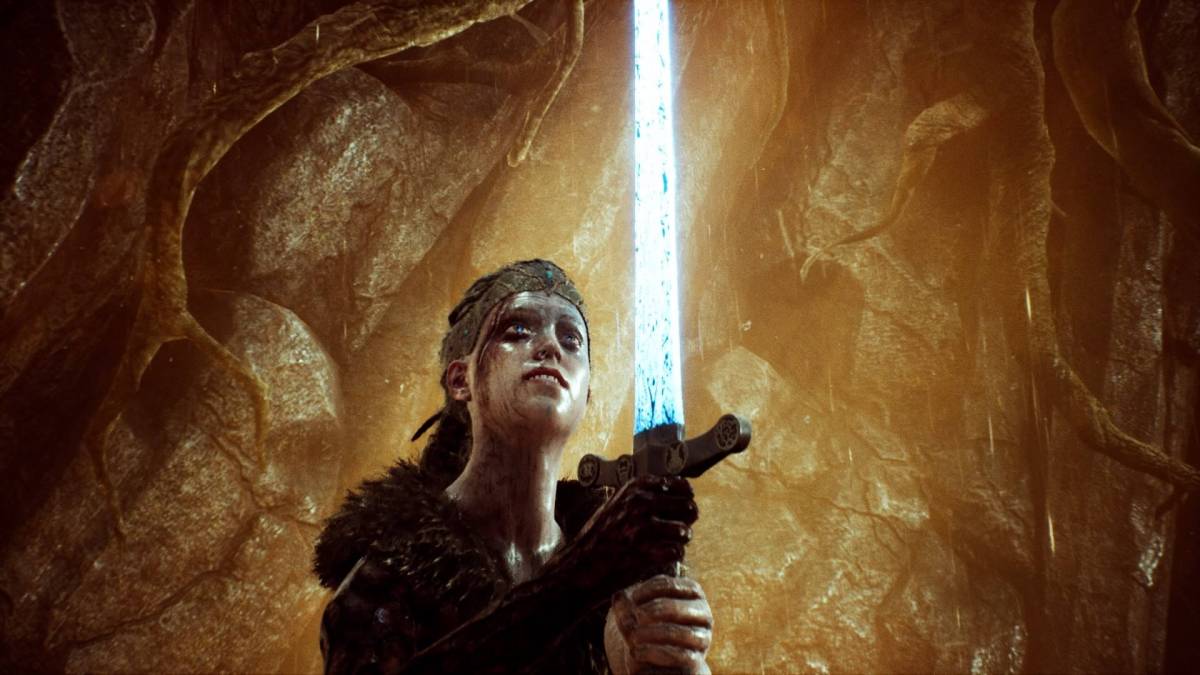 Ninja Theory haven’t been rushed into their digital depiction of mental health in a hellish Viking world. As an independent publisher without all of the red tape and slavish devotion to sticking to a schedule that’s an unhealthy burden in the AAA industry, they’ve allowed themselves breathing space to craft something totally honest, almost unbearably so.

If you’ve ever suffered with mental health issues, the plight of Senua – the dreadlocked, wide-eyed warrior at the center of Hellblade: Senua’s Sacrifice – is going to be unflinchingly relatable. The creeping, lingering internal voices she hears are meant to unsettle the player; annoy, even. Within the game’s first five minutes, a sombre boat journey across a gloomy lake, the voices are out in force. A mixture of sympathetic and condescending, they perfectly reflect not only Senua’s mental strife and uncertainty, but also anyone who’s ever been in a low place. You may scramble to adjust the volume or to skip the scene entirely, but Hellblade will have you by the scruff of the neck and not let you look away for even a second. 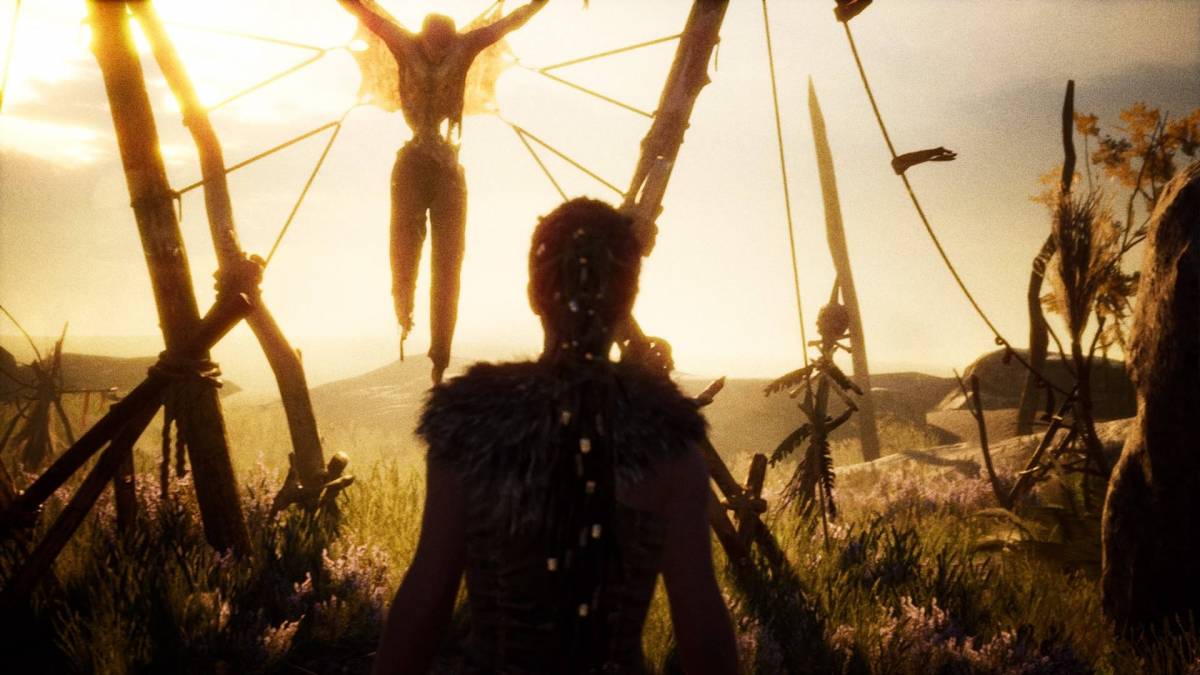 Once on land, Senua’s quest begins: to save the soul of her slain lover, Dillion, from hell and to defeat the darkness that engulfs her. Despite the fact that her story seems like it could have been ripped directly from folklore, Senua isn’t the kind of heroine that would have reams upon reams of scripture written about her, or her name to be sung in mead halls with flagons of ale in the air.

Ostracised by her people because of her “darkness”, Senua walks a solitary road. She has no friends or family, just the skull of Dillion tied to her waist. Her mission is one of almost blind ambition, hoping beyond hope that she can overcome the trials set before her and also her psychosis. Senua’s hallucinations shift the world around her almost uncontrollably, forcing her to confront her demons in beautifully rendered and passionately acted cutscenes that wouldn’t feel out of place in an RSC production. Melina Juergens’ unsettling gaze pierces through the screen, drawing you in and making you care for the embattled loner from the off. 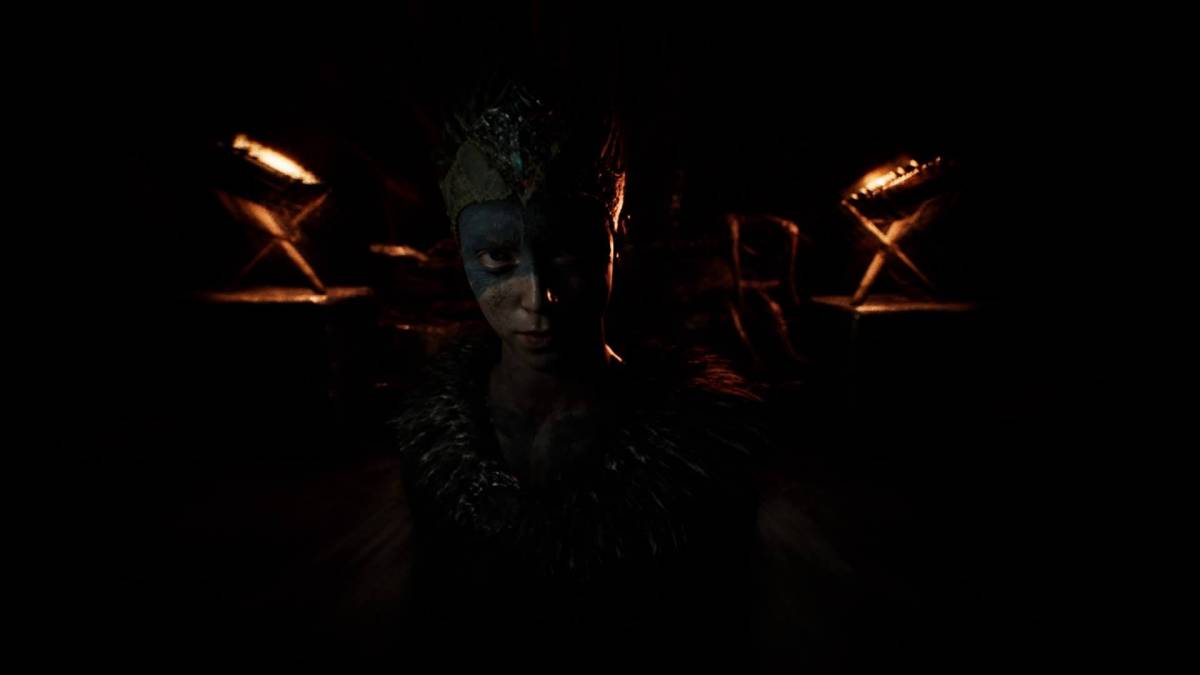 But she isn’t weak, far from it. Hellblade’s combat shows off Senua’s warrior side, allowing her to dash around and cut swathes through the (many) enemies she will face. Ninja Theory have always excelled at combat and while it may not be quite as well-rounded as some of their other work, Hellblade’s brand of hack-and-slash is unique in its own right. It does a very good job of progressing the basic, somewhat bland combat from the game’s early goings to making Senua feel like the Celtic version of Leonidas in Hellblade’s hectic latter stages.

The hallmarks of the hack and slash are all present – light attack, heavy attack, dodge et al – and easy to pick up, but the rhythm of the fights are what make them so interesting. There’s rarely just one enemy to take on, so spatial awareness is key – do you need to dispatch of the guy with the shield or the gigantic, charging brute first? Luckily, most of your attackers take their sweet time to actually do anything, which lends to Hellblade being a more tactical, slow-paced affair than what you might be used to from Ninja Theory’s back catalogue. 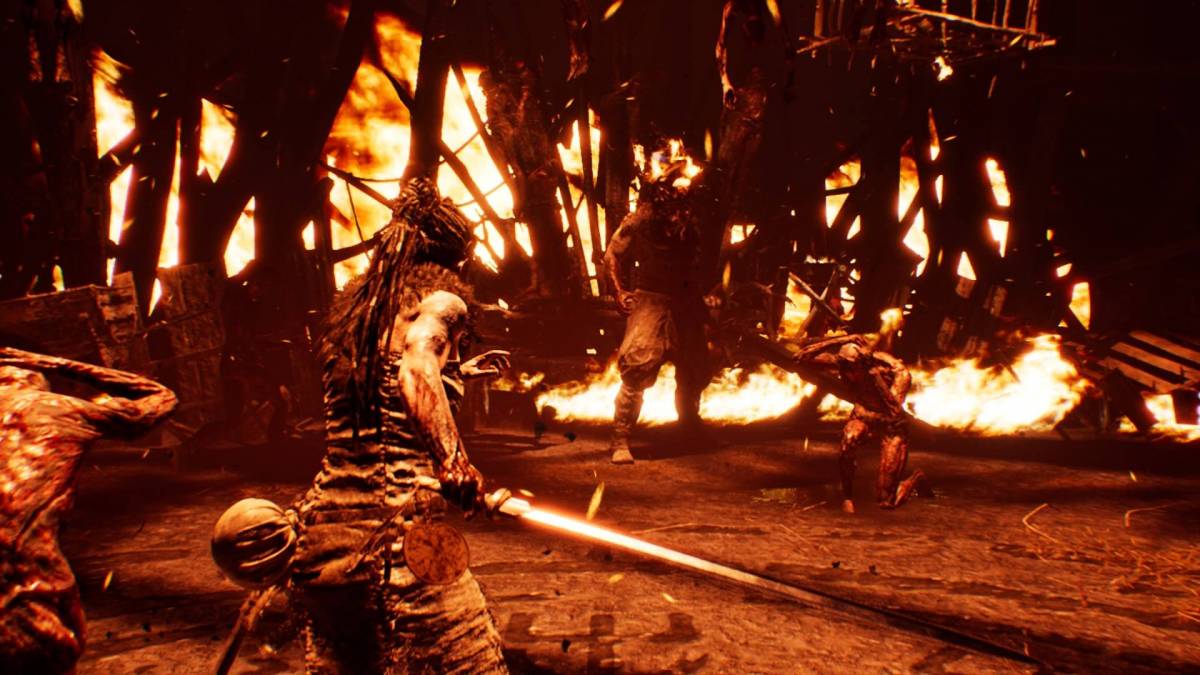 The camera is regularly not your friend in Hellblade, sticking to a Senua like a particularly nervy exchange student in the cafeteria, and it’s even more troublesome in combat, often getting stuck behind scenery or pulling in far too close when enemies are coming from all sides. However, almost as if to counteract this, Senua’s internal detractors will actually leap to her aid, telling her when to dodge or to use her Focus (read: slow-mo). The game doesn’t offer a HUD of any kind and withholds the controls to the pause menu, so most of the player’s understanding of what’s going on comes from Senua’s mind, which is just one of many of Hellblade’s distinctive design choices.

Much has been made of Ninja Theory’s decision to effectively sneak a permadeath system into the game, which was not talked about at all prior to release. A nasty surprise for some, but one that adds a lot of tension to every encounter, to make the seconds as Senua struggles to recover from an almost fatal blow seem like hours – it elevates the combat to playing like a round of violent chess. 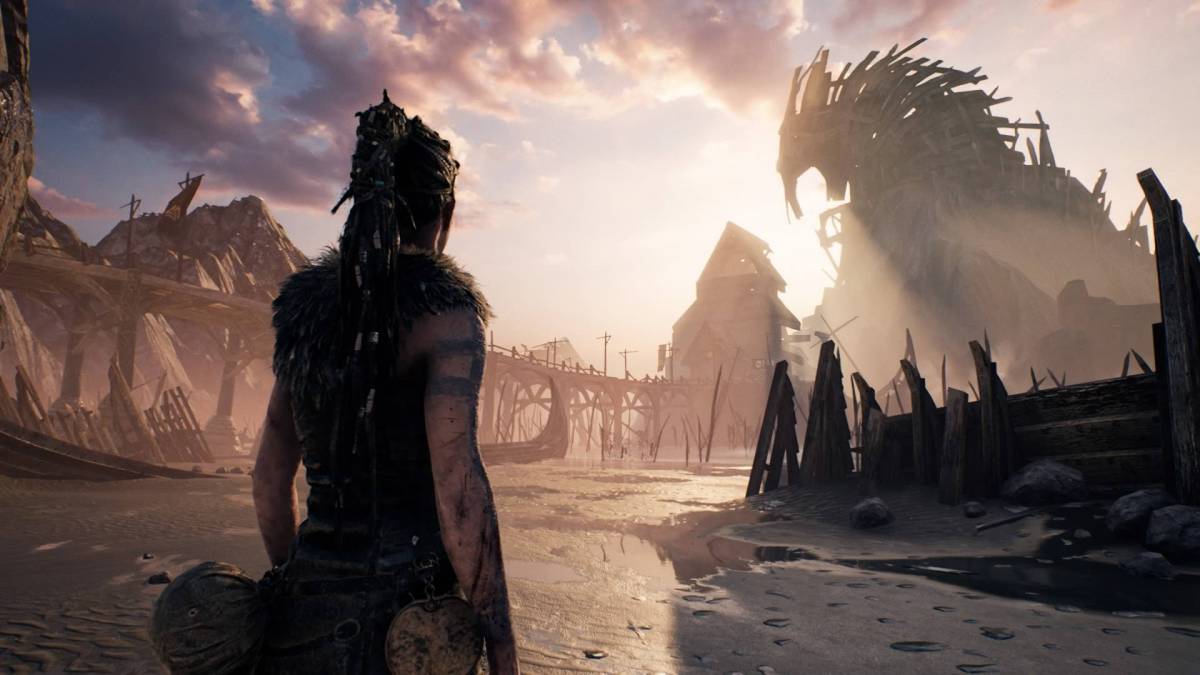 Following every death, tendrils known as the dark rot snake further up Senua’s arm. Once they reach her head, she finally succumbs to her mental turmoil and it’s game over – allegedly. There are suggestions that it might have all been a bluff on Ninja Theory’s part. I had my own suspicions when Senua’s arm was jet black after one death too many before going back to about half the intensity after the next one. Some are claiming that the premature end can be triggered by dying at successive checkpoints, but whatever the case may be, the mechanic has done its job: to make the player feel constantly on edge and uneasy.

As with a lot of games which tend to lean heavily on the narrative, Senua’s progress is often halted by puzzles. Thankfully, there’s no need to go diving underwater to collect X to insert into Y; the game instead asks Senua to overcome her mental barriers, to focus long enough to see a clear picture to unlock the path ahead. These are rationalised by runes that appear in the surroundings, asking the player to align Senua’s view to discover a specific shape. For instance, one such chinstroker required me to light a fire to cast a shadow from a piece of wood, which would then show an “M” shape. 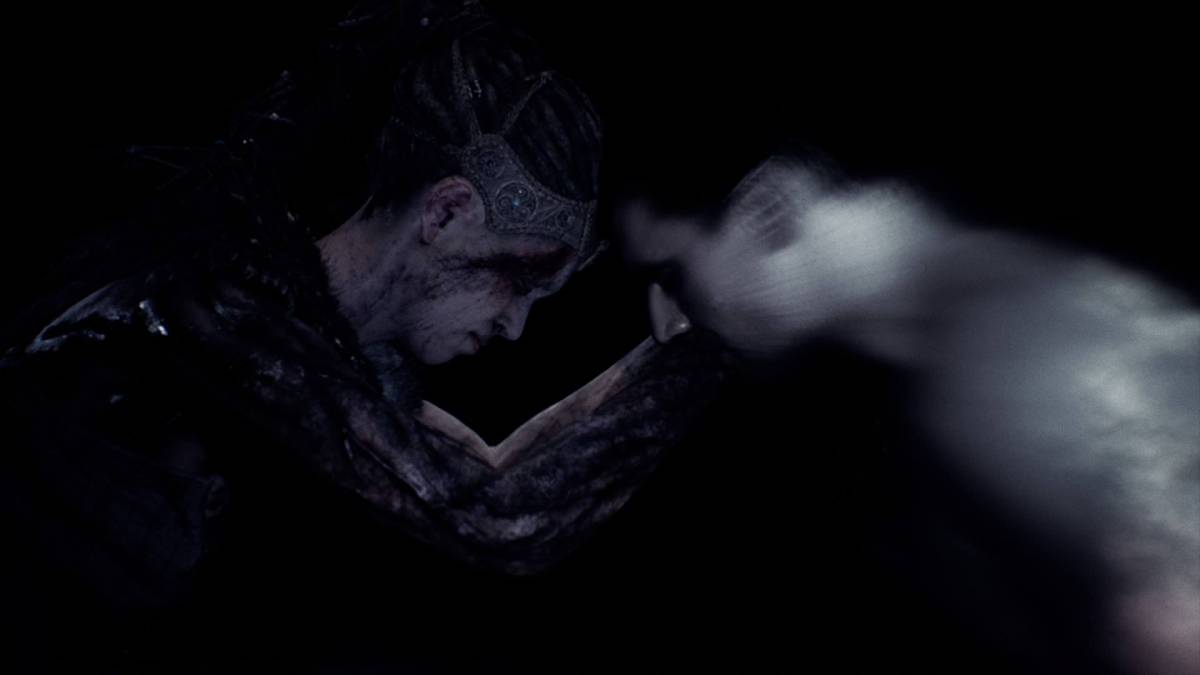 While this is a novel way of approaching puzzles, it does often suck the tension and atmosphere out of the game to trudge around sometimes samey environments and to come across obstacles that should be navigable, which is a serious pet peeve of mine. Why can’t I climb over this bit of wood? A later section sees Senua trying to “rebuild” a bridge, but the gap is so short between the planks that it must have been easier to just jump across.

Played on a vanilla PS4, Hellblade is sumptuous, a gothic and supremely detailed into a world that feels at once dead and alive. Its twisted denizens are finely detailed, gesturing mockingly towards Senua who herself is one of the most stunningly realised character models ever put to screen. Her hair hypnotically sways when moving from one challenge to the next and her face tells a thousand stories even when she isn’t saying anything, each grimace and frown giving more backstory and motivation than some of the rote protagonists that the industry spits out with each multi-million dollar production. There are times, however, when the relatively lower budget becomes apparent. 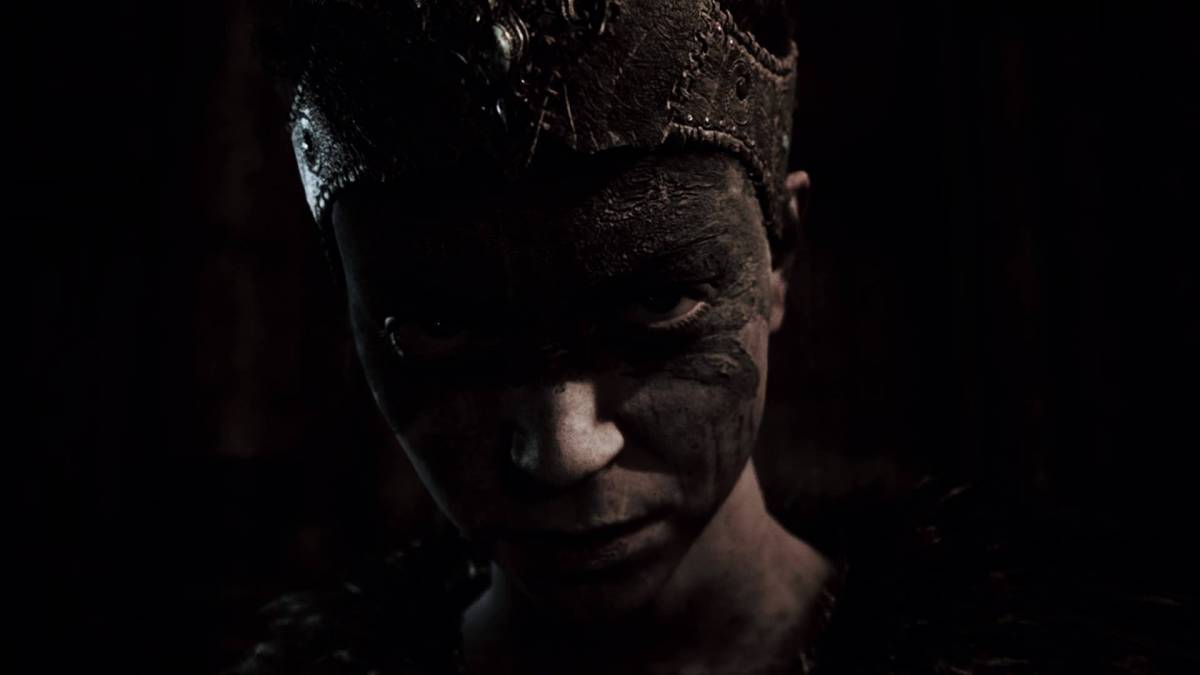 Though there was nothing particularly game-breaking during my playthrough, framerate stutters and clipping were common, but never quite enough to snap me out of the nightmare I was wholly engrossed in. Other instances, such as Senua getting totally stuck on a rock and her dying to the evil known as thin air, were more egregious and did pull me out of the experience – only two serious misdemeanours over the course of eight hours is forgivable, however.

The in-game logic isn’t always sound and the ride may sometimes be bumpy in Hellblade, but what ultimately matters most is the story being told at the heart of it.

Hellblade is a parable of mental health that simply needs to be experienced, to suffer through by Senua’s side. Ninja Theory never hit the player over the head with their message, instead opting to let the player fill in the blanks with what’s ailing Senua and why it is that she’s so alone and troubled. The lack of clarity surrounding Senua’s every move constantly makes the player question what they’re seeing: is this really happening or is this all in her mind? It’s never entirely obvious, but what is clear is that mental demons thrive in solitude.

Senua has nobody, something the game regularly reinforces. A flawed character of extreme misfortune, she’s been scapegoated into exile, which is what makes her bond with Dillion that much more special. He was her only connection to normality, and when that connection was unfairly severed, it all began to unravel even more for her. If that sounds at all familiar to you, it’s because it’s meant to be. At its heart, when you strip everything away, Hellblade is a frank and unrelenting warning about helping others, to not let them drift further and further towards darkness. For that reason alone, Hellblade may just be the year’s most vital game.

Verdict
Hellblade: Senua's Sacrifice isn't always perfect, but it's a remarkably meaningful and sincere exploration of self-doubt and depression all the same.
8.5
Cultured Vultures is a pop culture website established in 2013 covering all things gaming, movies, and more. We eat your words.
All The News On The Biggest Games