Velma: Art Of The Hateclick

New Scooby-Doo adaptation Velma has quickly become famous for all the wrong reasons. 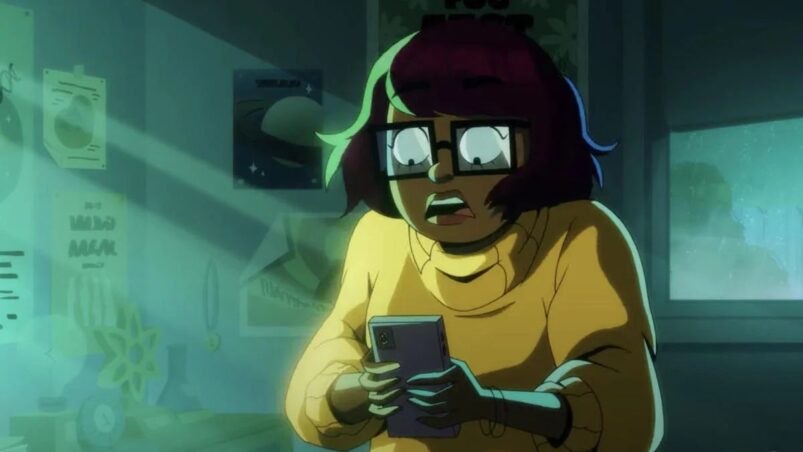 There’s a strange process at work which has seen Mindy Kaling’s loose Scooby-Doo adaptation Velma become one of the most talked-about things on the internet and immediately secure a second season, while being almost universally despised.

The modern trend of overly vulgar reboots, remakes, remixes, reimaginings, and reappraisals of children’s shows is one that’s treading water at the best of times, but Velma has quickly ensconced itself as the worst of this bad bunch. The simple and well-loved concept of a gang of meddling kids going around solving mysteries is jettisoned in favour of dreary high-school drama of the sort any actual high-schooler is already tired of, helmed by a character who here has been made vaguely put-upon in lieu of being in any way sympathetic.

It would be easy to dismiss Velma as just another of those shows with a capital-m Message and a definite ideological leaning, as it burbles on about the patriarchy and fatphobia and other trending Twitter topics instead of being funny or interesting. But when you weigh that against the show’s already-notorious line where its titular star suggests that “hashtag MeToo” (actually saying ‘hashtag’ out loud, naturally, like how real people do) stopped comedians telling the truth, it all begs the question – who is this for?

Granted, the hate isn’t completely universal. British broadsheet The Guardian, for instance, gave Velma four stars out of five. The thing is, though, my family are longtime Guardian readers, and I distinctly remember one of their film critics remorselessly revealing that they’d once given the fairly crappy 2005 Fantastic Four film four stars out of five, purely because it had ‘four’ in the name and the review was the last thing across their desk before they went off on holiday. This isn’t to say that all their reviews are slapdash four-out-of-fives, just that they’re not remotely above massaging the figures for reasons of their own.

Elsewhere, Slate’s Nadira Goffe came right out and said “Velma’s attempts at modernizing the franchise are so inept, they’ve given rise to conspiracy theories that Kaling intentionally made Velma bad as fodder for an ongoing culture war in which people would beef about it incessantly online,” which is a nice way of saying it without actually saying it.

Florentine chessmaster Niccolo Machiavelli is frequently quoted as saying “it is better to be feared than loved,” which leaves out the quite important second part of the sentence: “…if one cannot be both.” History doesn’t record if big Mac thought being hated was an acceptable bronze medal, but you can’t argue with the results.

Last year I pointed to a similar tactic at work in Netflix’s poorly-regarded Resident Evil adaptation, observing that “casting Lance Reddick as a character previously shown as nothing other than white will produce a backlash from racists, who can then be held up as emblematic of all the negative criticism”. Amazingly, with Velma this practice of racebending even managed to stick in Goffe’s craw, their knee jerking at the idea anyone but a caucasian would actually say “jinkies!”

Netflix butchering Resident Evil was merely sticking it to a franchise that started in 1996, and which worse still was, yuck, a video game, still the least cool of the big forms of modern media. But Velma – or Scooby-Doo, as it once was and will be again – started in 1969, and so everyone from former flower children on down will have opinions, and likely strong ones, about a proudly ‘edgy’ adaptation that doesn’t even have Scooby in it. Though this last point is mainly down to rights issues with the character, it feels like such a perfect capper to all Velma’s shameless pleas for negative attention.

(If that really was the reason, though, they’d definitely have included all-time champion hate figure Scrappy.)

Being intentionally bad, though, isn’t quite what’s going on here – or rather, it’s a side-effect rather than the centrepiece. Simply being bad is a fairly easy shortcut to the real goal of pissing people off. This deliberately infuriating style has been refined to an artform of its own in recent years, and has raised its head in all kinds of domains, like, for instance, journalism and frontline politics. Taken in this light, the show making a crack about victims of sexual assault suddenly makes more sense. It’s intentionally courting controversy, just as much as every time Family Guy deployed a racial stereotype and turned to camera with a big grin.

Among the more sophisticated corners of the internet, the response to works like Velma and Morbius is a straightforward “no hate-watching”. Despite what Kaling may think, modern audiences aren’t stupid, they’re well aware that hate-watching shows up in the viewing figures just the same. But knowing that, and actually resisting the itch to hate-watch, are two very different things.

CGP Grey did quite a good video on this trend – the upshot is, anger drives engagement remarkably well, it’s a call to action other emotions simply can’t match. It’s possible the Guardian turned out their four-star review just before clocking off for a week, but it’s also possible the critic saw the negative attention Velma was generating and thought “I know how to get in on that action”. And, admittedly, here I am writing about it too.

Given this apparent ethos at work behind the scenes of Velma, it’s hard to imagine that the upcoming second season will be able to resist tossing out some kind of nose-thumbing response to all this negative press, a defiant cry of “no-one likes us, we don’t care.” Why wouldn’t they reach for such an easy twist of the knife?

The actual comedian Stewart Lee did something like the opposite of this in his most recent live show – ostentatiously reading out an absolutely glowing review he received in the London Review Of Books from legendary playwright Alan Bennett, only to verbally jiu-jitsu Bennett’s florid praise into being “the kiss of death”, concluding with a wonderfully petulant “I hate Alan Bennett”. Allowing yourself to be the butt of the joke demonstrates a maturity and self-assurance you just can’t buy, but I’m not criticising Velma for not doing this. In fact, maybe it was all along – there’s clearly a fall guy here, and it can only be the show itself.

On a final note, I really must advise anyone who was disappointed by Velma to check out the Scooby-Doo pastiche Mike Tyson Mysteries. It’s unashamedly vulgar and referential in much the same way, but actually makes that a fun thing, helped no end in that regard by the unsinkable joie de vivre of Iron Mike himself, who’s clearly having a lot of fun throughout. And, with its focus on mysteries and an animal member of the crew (the late Norm MacDonald as ‘Pigeon’), it’s by any metric a far more faithful adaptation of Scooby-Doo.

READ MORE: 10 Shows That Were Canceled Too Soon