TV REVIEW: Gilmore Girls: A Year In The Life – Spring 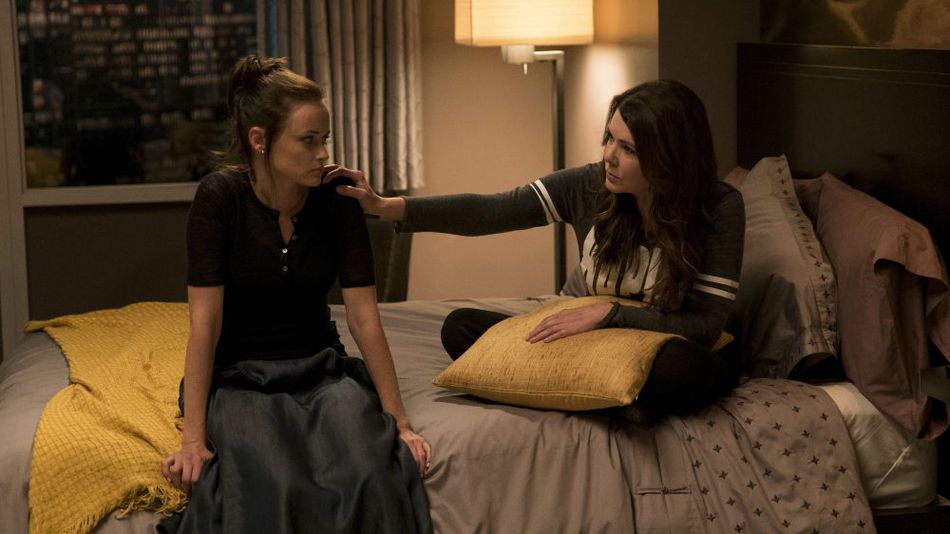 Every great writer knows that to take their characters on a journey they need to be ready to destroy their worlds. For the Gilmore girls, that means some pretty specific things. In Lorelai’s case, it’s about her mother warping her relationship with Luke through unspoken disagreements and a creeping web of secrets. For Rory, it comes down to her ‘rudderless’ existence finally catching up with her. Welcome to Spring, the episode of new Gilmore Girls where we get the rug yanked from under us.

In my review for Winter the other day, my main takeaway was how the episode felt so familiar. It had all the easily visible hallmarks of classic Gilmore Girls, from the fast talking to the quirky setting to the humorous side characters. Well, Spring puts another aspect of the original series front and centre: the way in which Lorelai and Rory tend to live (and mess up) their lives.

Lorelai is defined by her relationship with her mother. Even before the cameras started rolling on the first episode of Gilmore Girls way back in 2000, so much of Lorelai’s chosen existence came down to pushing herself away from what she saw her mother as. When she had Rory, she ran away, never finished high school, never went to college and worked her way up from hotel maid to manager (and eventually to owner).

But Emily Gilmore has an uncanny way of finding avenues of influence on her daughter’s life. In Spring, it came down to Luke. The seeds were planted back in Winter, with Emily able to make Lorelai subconsciously consider having a kid with her partner. Here, with Lorelai now attending joint therapy sessions with her mother, it was put front and centre. Why was she not married to Luke yet? Are they really just roommates as Emily says? Why is Lorelai still attending therapy on her own? And what about Emily’s heavy handed efforts to get Luke to franchise his diner? As we enter episode three, both Luke and Lorelai have secrets from each other, and if experience tells me anything, this will get worse before it gets better.

Rory, meanwhile, is doing a classic Rory. By virtue of literally growing up as the original series progressed, Rory was probably the Gilmore girl to change the most through its original run. One of those changes was a tendency to react to less than great situations by making them worse. Usually there would be a boy mixed in to exacerbate things too. Ruining a marriage? Dean. Crashing that yacht? Logan. Coming into Spring, Rory had a thousand plates spinning, and if only she could keep them turning everything would be fine. But that’s not how this works.

That book she was writing with Amy Shropshire (a name so stereotypically British it crosses over into being pure parody) falls apart. She writes a piece for GQ about queues which results with her sleeping with a Wookie. And that startup online media company who ‘desperately’ wanted Rory writing for them? Turns out it’s less of a cake walk than she expected. This is unsurprising, as the woman who runs the company is made up of the very worst things people think about Millennials boiled in a pot and served out of a Williamsburg hipster food truck.

So as the episode closes, Rory has been defeated. Her increasingly cracked veneer of control has crumbled as her difficult year finally takes a nosedive. All Rory’s scenes here are a reminder of how well Alexis Bledel defined the character through the original 153 episodes. In Spring, we’re getting the full range of character versatility she’d given to Rory by the time she graduated Yale at the end of season seven. As if to remind us how bad things are for Rory we even get a trip back to Chilton, the old, elite high school where she graduated valedictorian. She’s there to make an alumni speech alongside Paris. And if I’m honest with myself this paragraph was all just a neat segue to talk about how awesome Paris is in Spring.

Of all the supporting characters to make a return for A Year in the Life, it appears Paris will be the one to earn the biggest subplot. She’s going through a divorce, as her husband and college sweetheart Doyle makes inroads as a Hollywood screenwriter. If I’m truly honest, coming in to the new mini-series there were other characters I would have rather seen get such a major subplot. Seeing what writer Amy Sherman-Palladino has given Paris though, I’m thinking she’s the MVP of the supporting cast right now. Her ladies room breakdown at Chilton might have begun as hilarious, but by the end I’ll admit to feeling pretty bummed out for her and what she’s going through.

And I think I’ve gone on too long. Safe to say this was more classic Gilmore Girls. The personality quirks of Lorelai and Rory which have led them to self destruct in the past are on full display again here. But once more, Lauren Graham and Alexis Bledel are so whimsically charming we’re kind of forced to root for them. Which is important for what amounts to the first half of the second act in a three act story. If you’d like a couple of predictions I’d say we haven’t heard the last of Alex Kingston as Naomi Shropshire, and there’s still two of Rory’s big three boyfriends we’ve yet to revisit.

Expect more Gilmore Girls reviews in the next few days.