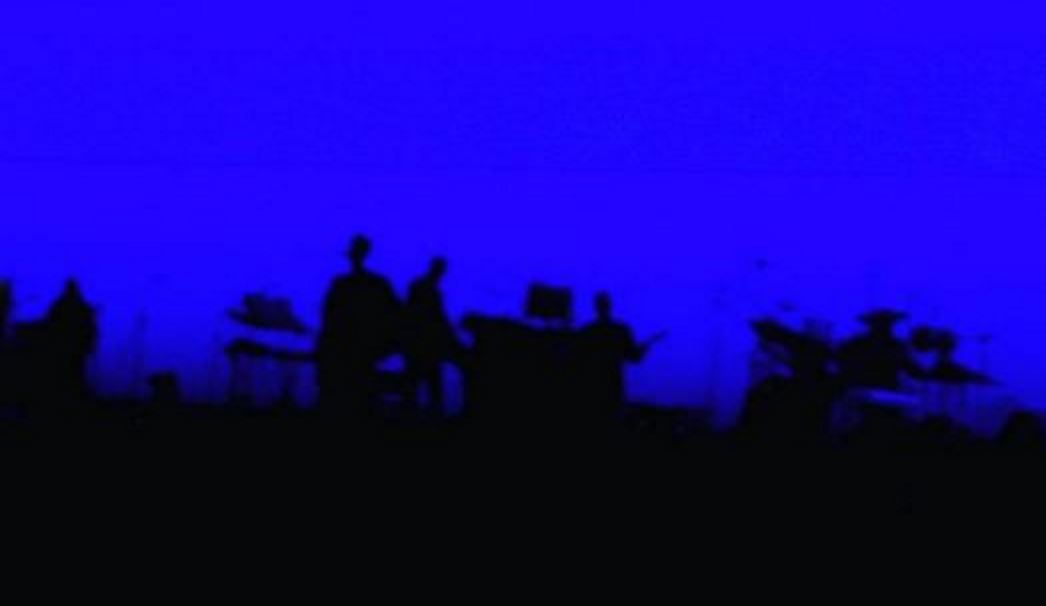 Though the weather on the whole may have not impeded on attendance, it did perhaps have an impact on tardiness. The day starting out with the same kind of ‘turn up for headliners’ levels of crowd you might expect at a gig, more so than let’s get our money’s worth festival punctuality. And though this may be at its core a Massive Attack gig, for all intents and purposes it was a day festival, if anything, that Massive Attack happened be headlining and possibly curating.

It’s at this point I of course confess that I too did not arrive in time for it all to kick off at 1pm. But come on, I got there at 3pm, and that’s not bad for having had to crawl out of the deepest, darkest valleys of south Wales first.

The setup at first seemed a little overboard with the early crowd, but when the masses were in full swing, though there were plentiful bars, the queues, they did overwhelm. But ho hum, it’s a festival (sort of) what you gonna expect. I’m only bitter because after having had my fill of cider, gin, and pre-gig rum, the one bar I queued ages for had run completely empty of wine when I got there. Oh well, more cider and gin.

Anyway, fuck this chatter, the music.

Savages on the main stage were first act I caught properly on the day, and the first act to draw a proper crowd to it away from what little shelter there was (see: the time you were being served at the bar). On a main stage bill that read as pretty eclectic, it was perhaps Savages that stood out most as perhaps out of place. However, their sometimes fierce, sometimes atmospheric, always savage (ahem) brand of impassioned post-punk got the already weather-beaten crowd up and about a bit. Particularly with hypnotic and heavy tracks like ‘The Answer’ of their brilliant latest album ‘Adore’.

At this point, I cut across to The Information tent (or 3rd stage) for my only real dalliance from the main stage – and my only real bit of proper dry viewing – to eagerly catch Kate Tempest do a spoken word set. Now, a cynic may say that the rammed tent of onlookers gathered to watch a spoken word performance at a festival filled with rock bands, DJs, rappers, and the like, were in sheltering from the rain. However, how would that explain the crowd spilling out into the rain and remaining regardless? If there were any dryseekers in attendance, they were clearly won over as Tempest’s acapella rhymes were met with relatively rapturous applause. Particularly her political polemic.

Next up was grime legend Skepta, who’s been having somewhat of a renaissance recently, what with his bromance with Drake and making some significant waves across the pond (albeit scuppered somewhat by visa issues), but most of all the long awaited release of his Konnichiwa album. Here began my first real beef with the bar queues, having been stuck in one before Skepta’s set, he had started before I got the bar, but being as the bar was stage right, I was able to get down and privately spit-a-long to ‘That’s Not Me’, so whatever. Skepta’s set delivered on the grime bangers you’d expect, and got a good portion of the crowd bouncing and debuting their best grime flows. Admittedly it was mostly the yute in attendance that seemed to go off for Skepta’s set – ‘Shutdown’ especially as expected – with some of the crowd seeming a little underwhelmed, but you can’t please everyone.

On an eclectic main stage of headliners in their own right, Primal Scream perhaps stood out the most as the act who could equally be orchestrating an event like this and arguably drawing a similar crowd of their own. Something that the band themselves went someway to proving/advertising with the set they put on. Full of classics, and peppered with newer tracks (but not too many, they know what the people want), the entire time the Scream were on stage the audience was boogying on down and moving on up like it were the 90s and they were chock full of ecstasy – and only one of those may have been true. I assure you, that was no mean feat given the relentless rain and queuing the crowd had been exposed to all day at this point – MDMA or no MDMA. The band were tight, knowing when to reign in their extended grooves, and Bobby Gillespie’s charismatic Mick Jaggerisms had the whole crowd in the palm of his hand, and certainly helped them get their rocks off in the end.

And from possible headliners to actual headliners, Massive Attack arrived on stage as moodily as you might expect, arriving awash in atmosphere and lighting, before slow-burning their way into Blue Lines closer, and uplifting classic, that is ‘Hymn of the Big Wheel’. As positive feeling and euphorically uniting a way to start a gig as one might like, but underpinned by more serious undertones – beyond the song’s lyrics themselves – as Massive Attack introduce us to a key component of their light and stage show tonight. Throughout the set messages regularly type themselves out across the large screens at the back of stage. 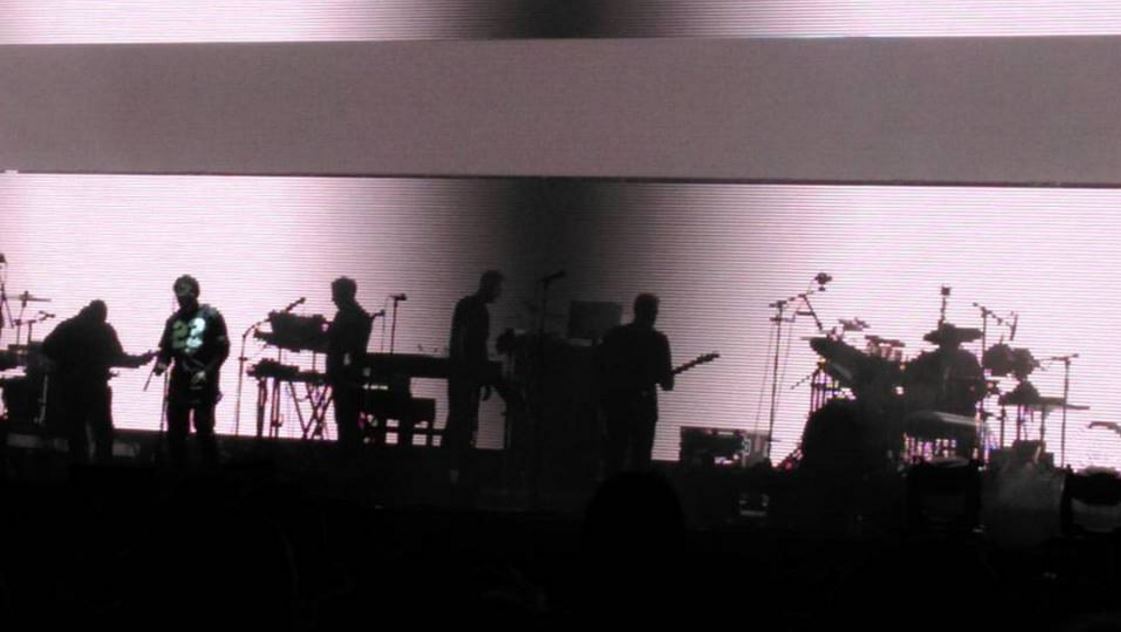 These messages often asked the audience questions, including some of life’s bigger philosophical contemplations, as well as questions designed to challenge the status quo of our current political climate and capitalist society, or at least the audience’s perceptions of it. In other cases the emphasised the audiences own questions and interactions of the world replicating Google search dropdown possibilities. For some this may have enhanced the performance, for others it may have hindered it, and for other others it may have been ignored or passed them by. My verdict? They were pretty cool, often adding to things, but at the same time they came across a little pointless or distracting in parts, and a prize to anyone who could make sense of the seemingly random list of names that kept being worked through; from philosophers and scientists to Rita Ora, among others.

Musically speaking Massive Attack delivered on their titular promise; assaulting the crowd with a huge sound that whilst not driving away the rain, certainly drove away any fucks that were given about it. Engulfed in Massive Attack’s seductively entrancing and heavy hip hop infused electronica, it was easy to forget it was raining, and hard to give a shit when you remembered. Depending on who you ask, Massive Attack may or may not have played a best of set – many may say not, but given Mezzanine was represented by four tracks, and Blue Lines by three, there wasn’t much to complain about. Well, aside from the absence of the seemingly retired ‘Teardrop’ from the set, if you’re that way inclined.

However, the thing some may question most would be the break in the set to cover two Young Father’s songs. Whom whilst a great act, and featuring on a brilliant Massive Attack track (‘Voodoo in My Blood’), this was a Massive Attack gig and that time could’ve gone to more Massive Attack. But then, this was a Massive Attack gig, and if they want to use some of their time to give a leg up to an up and coming act by introducing them to a wider audience, who are we to judge? It’s pretty fucking cool of them to do so. We can still complain if we want to though, and I’m not a hundred percent that I want to anyway.

Night time is the right time for Massive Attack and the brooding, sexual, paranoid, sensual, edgy, dubby, sounds the spilled across Clifton Downs bled seamlessly into one another, washing over and moving the swaying swarm like tall grass in a particularly stoned and rhythmic wind. A rarity’s a rarity, and that can’t help but colour a perspective, but it’s safe (from harm) to say that, regardless, Massive Attack brought a pretty spectacular show to Clifton Downs – whether they wanted it or not. Though, with Heligoland some six years ago now, and this year’s EP and single feeling like teasers to a new album, perhaps such Massive Attack shows won’t be such rarities. We can hope at least.

Oh, but sort out the organisation a little next time. If we hadn’t unashamedly cheated the shuttle bus queue we’d’ve been stuck in Clifton Downs for days. And more wine.