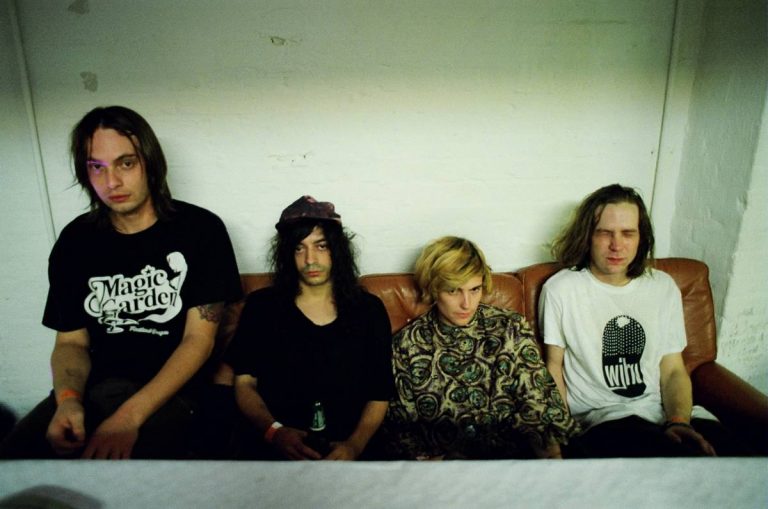 It was an intimate and tightly packed crowd at The Echo in Los Angeles, California. After a thumping and wild performance by The Paranoyds and a smooth rockin’ dream pop set by La Sera, New York City’s very own DIIV were set to take the tiny stage surrounded by their enthusiastic fans and friends. Much like their artistic visual presentation in the background, this DIIV concert would be filled with unexpected moments of raw feeling and humanity, but also frustration.

It’s always hard to tell what a shoegaze/indie rock band might bring to a live setting. Will they put you to sleep? Completely wreck your eardrums? Or will the guitars drown out the entire venue with unexplainable noise? Luckily, when DIIV opened with ‘Human’ off their debut album Oshin, all these worries vanished into the lush and upbeat wave of sound that makes DIIV unique in today’s era of rock music. Lead by singer/songwriter and guitarist Zachary Cole Smith, the band then performed the songs ‘Bent (Roi’s Song)’ and ‘Under the Sun’ off their brand new album Is The Is Are, while interweaving their critically acclaimed hits from Oshin. It didn’t take long for the sea of beautifully overwhelmed fans to start grooving, jumping, and even crowd surf to DIIV’s pounding drums, heavy bass, dreamy keyboards, and free flowing guitar playing matched perfectly to Smith’s deeply smooth and sharpened voice.

Smiles were everywhere to be seen, even on the band members themselves as they watched crowd surfers glide by one by one. However, around halfway through the set, a few frustrations slowed the band’s momentum. Smith gave a brief warning to the audience saying that they would try to play their song ‘Healthy Moon’ for the first time, and to bare with them. Normally, at many shows a band would say this and still be able to play a flawless rendition of the song. Unlike those bands, DIIV actually struggled to get going. They took about six tries at the intro until they were able to finally get it together and finish the song. The audience was supportive for the most part, but some of the previously built up energy had left the room.

The band seemed to recover by playing more songs off their latest album, but Smith was noticeably frustrated and even admitted to being off and not feeling good about himself. Nevertheless, the show went on, and when fan favorite ‘Doused’ was played at the end, crowd surfers rose into the air once again, and boyfriend’s held their ladies at the waist and danced the whole song through.

For their encore, DIIV finished with the songs ‘Past Lives’, ‘Follow’, and ‘Wait’. Some of the crowd had left, but the ones who stayed still expressed their appreciation for their powerful, honest performance. Before the final song, ‘Wait’, Smith shared that one of his pedals hadn’t been working and thanked the audience for being patient. He further released his frustration by screaming “Fuck” multiple times during the final song and encouraged the audience to do so as well.

Though it may not have been a perfect outing, DIIV’s first show of their U.S tour still packed a powerful punch. Good vibes were shared and real emotion encapsulated the stage, making the performance memorable for its flaws but also for its humanity. DIIV’s willingness to perform and persevere despite the mishaps was admirable and revealed a true love for their music and their fans.

Catch DIIV on tour in the U.S and Europe in the upcoming months as they support their new album Is The Is Are.