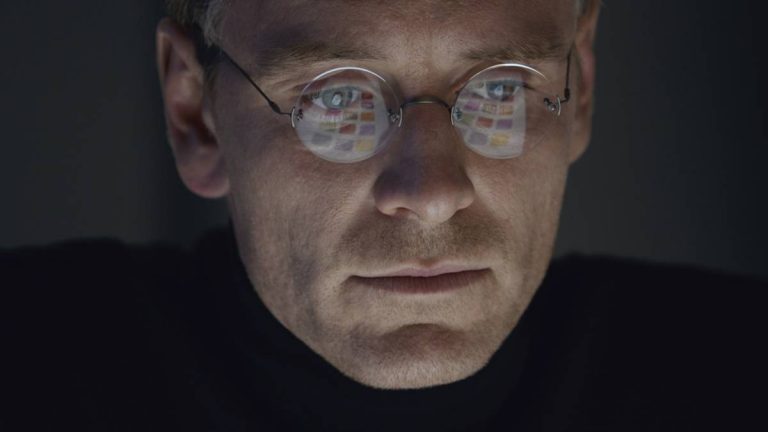 Many of us spend our lives glued to our mobile phones, tablets and laptops. Our attention fixed on bright screens for prolonged periods, screens that shed light on our zombie-like faces but not necessarily the world we inhabit. Through these gadgets, we connect with people across the planet, supposed friends and more often than not, complete strangers. However, no matter how many Facebook friends or Followers we have, nothing is more significant to who we are, than the actual people we interact with on a daily basis.

At its core, Danny Boyle and Aaron Sorkin’s new stimulating drama is about the importance of the people around us, how our friends, our enemies and our loved ones are arguably more responsible for the state of our character than we are.

Just like Apple Inc, the story behind the making of the product is often just as interesting as the product itself. From its initial inception in 2011, the hotly anticipated and greatly coveted Aaron Sorkin penned Steve Jobs biopic hasn’t had the smoothest journey to our multiplex screens. From having constant directorial and leading actor changes, which nearly saw David Fincher take the helm with Christian Bale as the titular figure, to being dragged through the mud of the infamous Sony scandal hack of 2014, Universal Pictures finally deliver their take on the Steve Jobs story, albeit with a slightly peculiar choice in both director and leading man.

In this loose adaptation of Walter Isaacson’s biography, the flawlessly commanding Michael Fassbender (Hunger, X-Men Series) willingly dons the notorious black turtleneck and frameless glasses, whilst taking direction from Slumdog Millionare’s Danny Boyle, who in turn is guided by the thunderous writing talents of Aaron Sorkin (The Social Network, The West Wing). Steve Jobs is the tragic tale of the complicated, unapproachable and frustratingly inhuman genius tech figure, whose sole desire was to create simple, accessible future technologies that would bring people together and make computing a more human experience. A man who moulded himself in the public eye, an actor if you will, who would take to the stage of numerous product launches and give us a performance worthy of Stanislavski. In this age of technological revolution and excessive consumerism, he would become the people’s champion, a messiah, a beacon of hope and a personification of forward thinking. A symbol we all needed, as much as he needed us. He was an inventor whose greatest invention was himself.

You won’t the usual sickly schmaltzy scenes of a seven-year-old Steve Jobs first discovering his connection and obsessive love with computers. As he sets out on his path of destiny, a path that will lead him to breaking the oppressive technological shackles of the late eighties and freeing the imagination of millions of people across the globe. No, Steve Jobs is certainly no ordinary biopic. Praise should be given to the studio as much as Sorkin for taking such a risk in producing a unique and ballsy approach to the well-trodden biopic formula. An ingenious concept of breaking down the three-act structure into three separate time periods. This riveting backstage drama takes place behind the scenes of the three biggest product launches of Jobs’ career.

Commencing with the launch of the first Apple Macintosh computer in 1984 and all of the last minute technical issues, an aggravated Jobs harasses and intimidates his employees to fix everything before taking to the stage. All of this, whilst dealing with his own personal issues as his ex-girlfriend (Katherine Waterson) and supposed daughter show up questioning why they are on welfare, when his Apple stock is worth 441 million dollars.

Next up is NeXT, the launch of Jobs’ doomed, perfectly cubed, computing system. The system he is launching to rival Apple’s, the very company he has now long been exiled from. A sullen and vengeful Jobs is forced to deal with old-friends, past-co-workers and his former CEO and surrogate father figure played to perfection by Jeff Daniels. People whom, as he sees it, stabbed him in the back and didn’t even bother to clean the knife. This journey eventually takes us to 1998, where a wiser yet equally unsettled and emotionally stunted man (having returned to his old company like Christ on the third day) is only moments away from unveiling arguably, one of the greatest technological and cultural achievements in recent history.

It’s a refreshing and unique angle and one that offers an interesting insight into what could be seen as the three most significant and defining moments of this character’s fascinating life. Sorkin and Boyle ingeniously encapsulate the zeitgeists of each of the three time settings and the director who, along with cinematographer Alwin H. Kuchler, inventively shoot the early sections of the movie with 35mm film and the latter portions with digital, providing a subconsciously evolving quality to the texture of the visuals.

However, the same way The Social Network wasn’t really about Facebook, this spiritual sequel (in what could potentially be a trilogy of ‘Iconic American Entrepreneurs’ from Sorkin) isn’t really about computing. The story is very much about the humanity of Jobs or lack thereof. The film examines his unrelenting and stomach churning passion and how that obsession manifests itself in an unstoppable destructive pattern that he can’t seem to shake. His so called “friends” and family having to bite their tongues when faced with his inscrutable wrath.

Danny Boyle, famous for his overkill kinetic style, considerately dials it down for his latest outing (either that or his drug dealer cut off his supply of cocaine). Whilst this is a solid effort from the director who gets some absolutely stellar performances from his A-list cast and creatively uses a number of tools to inform the audience visually of some much needed exposition, the final result leaves a little more to be desired. Whereas 2010’s The Social Network, saw an almost perfect marriage between Sorkin and his director David Fincher, displaying a cohesive, united voice that transposed marvelously from script to screen, Boyle’s collaboration just doesn’t seem to gel as smoothly. Boyle’s efforts seemingly attempt to transform Sorkin’s ostensibly stripped back, behind the scenes drama (in which a group of people bicker and brood against a series of backstage lighting rigs and green rooms), into more of a frenetic and rip roaring affair. However, his efforts to try and visually compete with the pace at which Sorkin’s infamous dialogue moves, only results in a muddled and incompatible take. The direction all too often feels as though he is chasing the rapid-fire material like a donkey following a carrot and consequently the film suffers from frequent over-direction, direction that lacks much needed subtlety, particularly in this bombastic and operatic screenplay.

The inclusion of Aaron Sorkin’s name on a film poster, is often more noteworthy than that of the Hollywood actor. His distinct voice and presence is often the focal point of many of his scripted movies. He doesn’t so much write dialogue, more composes mellifluous lyrics that are presented in transfixing back and forth dialogue, which flows like a symphony and travels at the pace of a runaway locomotive. This magician screenwriter conjures up another fascinating and enthralling character study, that provides a beautifully intimate view of the famed icon. The story loses traction toward the end and the unfortunate disadvantage of its distinctive three-act structure is that it becomes slightly repetitive as proceedings unfold. Intriguing supporting characters, played wonderfully by the likes of Seth Rogen and Michael Stuhlbarg, are sidelined to allow more focus on Jobs’ relationship with his daughter. This decision progressively drags the film into unfitting sentimental territory in which one questions the level of conviction and stomach Boyle and Sorkin truly had toward the end of their tale. Leading the way to a disappointingly trite and sappy ending, accompanied with the inappropriate use of The Maccabees.

You shouldn’t take this film as fact. You should take it as what it is and what it was intended to be. A captivating and operatic, Shakespearian tale that takes you through a riveting journey into the mind of a dominating and memorable character. Sorkin’s voice is loud, bold and leaps from the screen itself. So loud in fact, it unfortunately overshadows the commendable efforts of Danny Boyle. After all is said and done, it appears Sorkin and Boyle’s offering is merely one another perspective on this extremely complex and controversial figure.