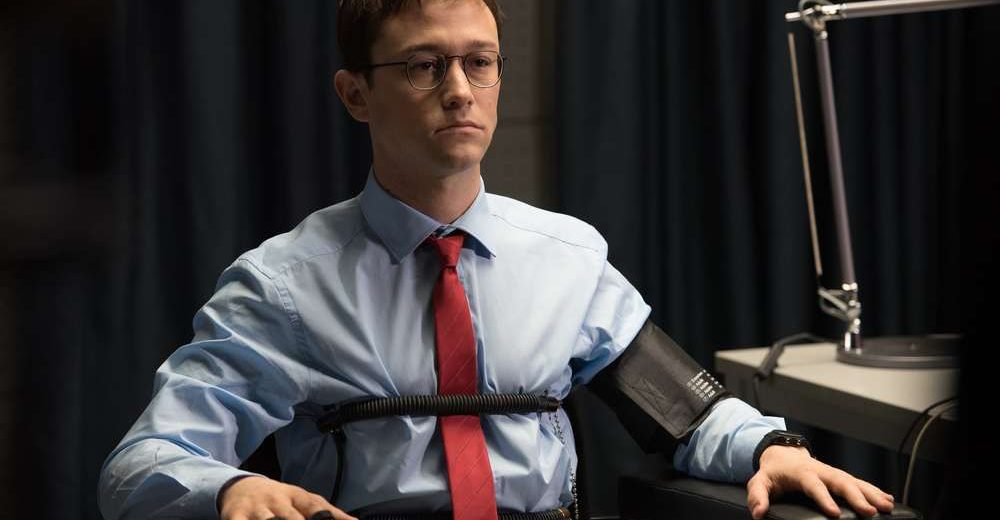 Hero. Villain. Patriot. Traitor. Since the incendiary revelations made by CIA contractor Edward Snowden in 2013 – that the US Government was, and still is, spying on the digital communications of normal people around the globe – many efforts have been made to have history frame him in a certain way. The latest of those efforts is Snowden, helmed by director Oliver Stone. And make no mistake, this movie aims to position Snowden firmly on the Hero and Patriot end of the spectrum.

Going into the movie, I had my scepticism that it was necessary for a cinematic adaptation to be made at all. That’s thanks to Laura Poitras’ Oscar-winning documentary Citizenfour. Filmed in 2013, the documentary shows Snowden working alongside journalists Glenn Greenwald and Ewen MacAskill to communicate the surveillance story to the world. It’s an arresting piece of documentary filmmaking, capturing Snowden first hand as he blows the whistle on his government, the camera unflinchingly trained on him as the reality of his new situation begins to sink in.

Thankfully, my scepticism was largely unfounded. While certain scenes in Snowden do feel like they’re remade shot-for-shot from Citizenfour, the movie broadens its timeframe enough that this is rarely an issue. The film kicks off in 2004, with a young Snowden (Joseph Gordon-Levitt) being discharged from military service thanks to a recurring leg injury. Determined to serve his country in another way, in 2006 he uses his skill with computers to join the CIA, under the stewardship of Corbin O’Brien (Rhys Ifans). At the same time, he begins dating Lindsay Mills (Shailene Woodley) after meeting her on a dating site.

Over the course of the next 7 years we follow Snowden through various jobs in the intelligence community around the world. We witness the strain the secrecy and stress of his work places on his relationship with Mills, as well as his own sanity. It is here in particular where Snowden excels. While some biopics can be guilty of focusing too much on the romantic life of the person in question (see: The Theory of Everything), in Snowden, it comes across as quite a shrewd move. The fact that the real-life Mills has stayed largely out of the limelight means that Snowden is allowed to explore a facet of the story that other mediums have not.

As the film moves into the third act, Snowden is becoming increasingly disillusioned with the government’s surveillance program, and paranoid that they might be spying on him. He then decides to steal government files and pass them onto Greenwald, MacAskill, and Poitras in Hong Kong.

Joseph Gordon-Levitt turns in the star performance, emulating the title character’s voice mannerisms in a scarily convincing way. When the real Edward Snowden shows up at the end of the film, it’s a little jarring at first, hammering home the excellence of Gordon-Levitt’s performance. Well worth a special mention is Zachary Quinto, who portrays Glenn Greenwald. He doesn’t appear often, but his angry exchanges with his newspaper’s legal team over the publication of Snowden’s revelations are among the film’s highlights.

Not everyone is deserving of such praise, however. Nicolas Cage’s performance is baffling, a bizarre fit for the tone and plot of the film. Not only that, but his character – a fabrication, though said to be loosely based on whistleblower William Binney – adds little to the film.

Oliver Stone, though certainly a safe pair of hands in the directors chair, is not immune of criticism either. While he generally does a solid job, a few heavy-handed moments stick out like a sore thumb. A moment in which the senior CIA man Corbin O’Brien speaks to Snowden on a Skype call – his face front and centre on a screen dominating the entire wall – feels like an excessive nod to Big Brother in 1984. Not only that, but O’Brien’s name was cribbed directly from 1984’s primary antagonist.

Stone’s heavy use of artistic license, and detraction from fact has been criticised by some, but many of his changes aid the flow and drama of the movie. The real life Snowden downloaded the documents he shared with the Guardian from the US Government’s server over the course of a year, and was able to walk right out of the door with them. In the movie, it’s done all in one go, with the memory card used to store them smuggled out inside a Rubik’s Cube. This is just one example of many factual inaccuracies, but these can be easily overlooked considering that the movie doesn’t shy away from some of the more disturbing implications of the key issues at hand.

Snowden is not a perfect movie, but it is a good movie. The biggest compliment that can be given to it is that it makes one of the biggest news stories of the decade more accessible. If enough tickets sell at the box office, it could open up the privacy debate all over again.