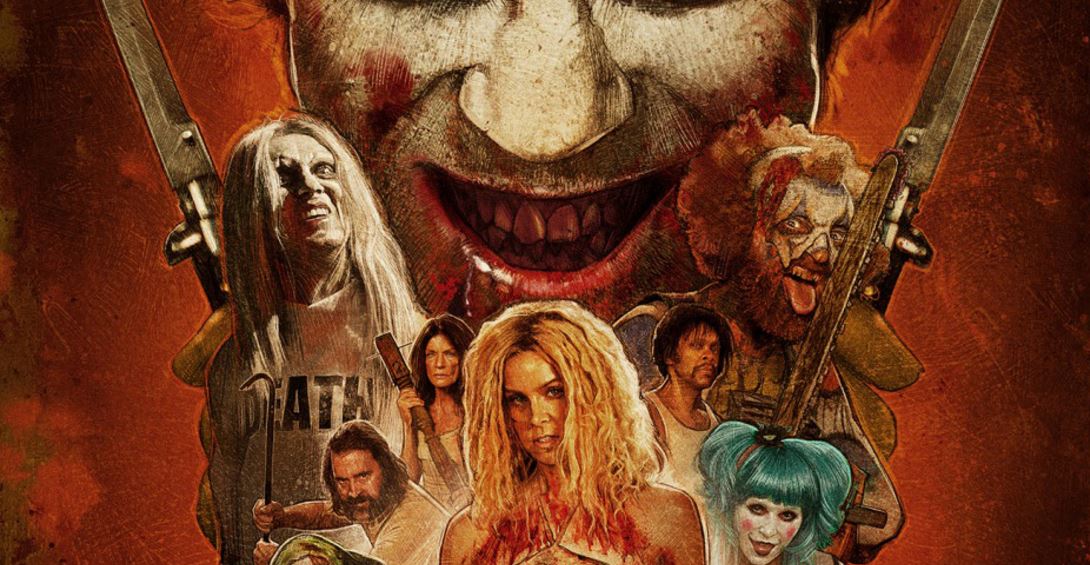 It was May 2014 when Rob Zombie first announced his plans to make 31, and the past couple years have been a rocky road for the film. Crowdfunded twice by fanbacked.com, the budget was only a miniscule 1.5 million, a fraction of what he had to make his first four films. Twice the MPAA refused to grant an R rating, forcing the film to be edited down three separate times. Theatre release was extremely limited and reviewers have not been kind. This winter the film was released on DVD with very little fanfare.

31 takes place in 1976 and tells the story of a van full of carnies who are kidnapped on Halloween. Held by a trio of powdered-wigged aristocrats (the leader—Father Napoleon-Horatio-Silas Murder—played by Malcom McDowell) they are forced to play a game called 31, the point of which is to survive twelve hours in an industrial labyrinth while being pursued by a group of murderous clowns. There’s a great soundtrack, wildly demented villains, plenty of gore and sick jokes, and those great retro-grindhouse filmmaking techniques that Zombie so famously employees. Unfortunately, there is little more.

I am a huge fan of Zombie’s previous films, and also a great defender of them. I love to point out to his critics that although his movies are over the top, comic-book-like, campy, and gratuitous in their portrayal of sex and violence, they are also filled with well-developed (and admittedly extravagant to the extreme) characters, amazing dialogue, and wild narratives that leave you guessing just where in the hell he is heading. While 31 delivers the former in spades, it’s sorely lacking in the latter.

The film’s beginning had me all excited to be back in Rob Zombie land again. He’s a master at capturing the ambiance of the seventies, from that dirty exploitation-film quality to the wardrobe and hair. The carnival workers (Charlie played by Zombie’s gorgeous wife Sheri Moon Zombie, a staple in his movies) were tossing out the bawdy banter, and there was even a cameo by the famous character actor Tracey Walter of Repo Man fame, whom I love.

But this didn’t last long.

Soon, and without any real buildup or foreshadowing, they were captured. It was here that I first noticed the toll three rounds of editing for an R rating had on the picture. The action was disjointed and hard to follow. From this moment on the story just became one long, meandering cat-and-mouse chase sequence.

While the killer clowns managed to get off some fairly good one liners, there was none of the witty and hilarious back and forth wordplay we got from the Firefly Family in House of a Thousand Corpses and The Devil’s Rejects. I was amused by Sick-head, a Hispanic, midget, Nazi clown; but, I didn’t feel his character was used to the greatest effect, unlike, for instance, the ranting and raving of Otis Driftwood, the albino, redneck serial killer from House and Rejects. In fact, it was really the lack of effort put into developing the antagonists’ grandiloquent and overblown personalities that caused the movie to fizzle out for me.

It seems Zombie may be in some kind of funk. With his last film, The Lords of Salem, he went for a more grandiose and arty look, forsaking gore and carnage for a psychological thriller reminiscent of Polanski films like Rosemary’s Baby, Revulsion, and The Tenant. But his fans were generally displeased at the lack of violence and bloodshed. So, with 31, Rob basically tried to get back to his roots with a gnarly bloodbath of a film featuring chainsaw-wielding psychopathic clowns. Sadly, it’s missing that tongue-in-cheek intelligence that so permeated his earlier pieces.

Instead of rising above its own blatant and uncompromising campiness with moments of sheer originality, like, say, a Tarantino film might do, it falls prey to the same tired clichés it is in many ways poking fun at. While Zombie’s earlier work is populated with one-of-a-kind characters like Captain Spaulding—the clown from House of a Thousand Corpses and The Devil’s Rejects who runs a roadside gas station/fried-chicken joint/horror museum—the villains in 31 are vague and silly, giving the picture a thrown-together and rushed quality.

Let’s hope his next venture hits the perfect balance, that sweet spot between schlock camp and arty esprit that makes his vision of the horror film so special. For, I think it’s safe to say, no one makes movies like Rob Zombie – his visual style and crazy imagination are truly unique.

Verdict
While hardcore fans of Rob Zombie’s black-as-coal humor and grindhouse-horror style will most likely delight in this campy, gore-filled romp, 31 lacks the wit and charm of his early films.
7
Cultured Vultures is a pop culture website established in 2013 covering all things gaming, movies, and more. We eat your words.
All The News On The Biggest Games