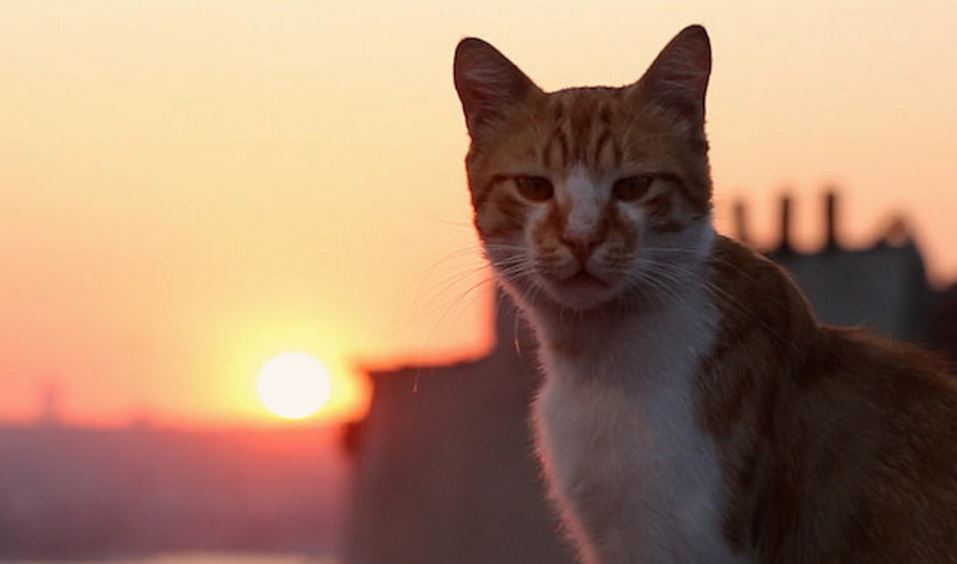 The Turkish documentary Kedi is a film about the street cats who roam the streets of Istanbul and the humanity who care for them. It is such a well-done labor of love that you wish the film had one thing: a narrative.

Istanbul has thousands of cats roaming its streets. They’re cared for by the populace, partly as part of their religion, partly for their usefulness at catching mice and rats, and partly out of love.

Kedi follows the lives of six cats. Their stories are told by their humans. The cats are too busy with their lives to bother.

Sari, a yellow tabby, hangs at a clothing store. She doesn’t mind being petted, but food is of more importance. Why? Feeding her kittens. Dunman, is sleek grey and white beggar at an upscale restaurant who paws on the glass to get his supper. His human friends bring his expensive cheese outside. Bengu roams the docks becoming part of the life of the workmen. Gamzi is a black and white climber who has two lovers: one a woman, the other, a man. Denzi hangs out at the local fish market, snoozing on the awning, where he’s a favorite with the crowd.

Psikopat is the ruler of her neighborhood mainly by the slashing of her claws and persistent bullying of others. Even her husband is terrified. Aslan is a hardworking cat that saw an opportunity and made the most of it. He hangs at a high-end shore restaurant that had been bothered by mice. No longer.

Kudos to the filmmakers. Most of the documentary is shot from a cat’s eye view of the city and its people. They patiently spend months tracking their cats, giving us stunning views of them running over the rough cobblestones of the streets, and beside the restless waters of the Bosphorus.

Occasionally it’s really cool. To show Aslan hunting mice, the filmmakers used a tiny infrared camera under the asphalt to show what happens in the narrow tunnel underneath.

The filmmakers concentrated on the cats but they give equal time to the effect the cats have on their people. Two who suffered from depression found caring of their cats saved them from downward spirals. One woman cooks 20 pounds of chicken a day to feeds 60 cats.

Sometimes the streets are rough. When the man in the market who cares for Denzi is given an injured kitten to save, it’s heartbreaking to watch.

As one man ladles out his food for his cats, he says, “God will provide, but I’m the middle man.”

See Kedi. It’s about hard-working opportunists succeeding in the big city, and the humans who love them. Oh, and by the way – it’s about cats.